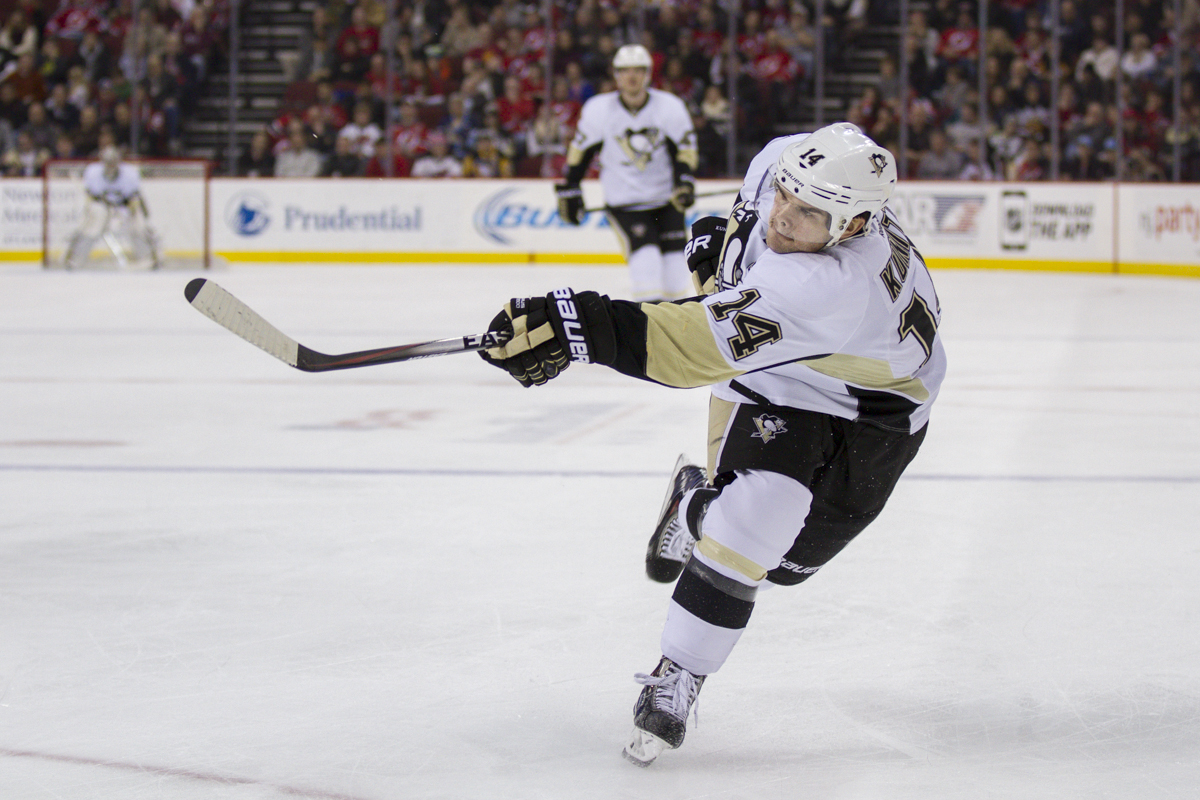 For most of the regular season, the Pittsburgh Penguins have persevered through a glut of injuries to stay at or near the top of the Metropolitan Division, and in the upper half of the Eastern Conference playoff picture.

However, as the team inches closer to full health – defenseman Christian Ehrhoff (concussion) is the only one still missing from game action, other than players like Pascal Dupuis and Olli Maatta who aren’t expected back this year – the Penguins are becoming a puzzling study in inconsistency.

A big, 4-1 character win against the streaking Detroit Red Wings was followed by nearly blowing a 3-0 lead against a non-playoff team in Ottawa; Pittsburgh had to battle back to beat the Senators, 5-4, in a shootout. Then there was an inspiring, 2-1 overtime loss Sunday to the perennial Cup contender Chicago Blackhawks, followed by lackluster efforts in losses against divisional rivals Washington and Columbus that dropped the Penguins’ division record to 7-11-4.

Those losses also dropped the Penguins to fourth place in the division and seventh in the conference. They’re not in serious danger of missing the postseason at this point – a logjam in the standings means they’re still just one point out of second place in the division, six out of first – but, with the playoffs’ division-focused format, they’re also not a good bet to get out of the first round.

That’s not exactly what Penguins management had in mind when they overhauled the entire organization – from general managers to coaches to players – last summer. Which is why a member of the team’s front office told the Pittsburgh Tribune-Review Friday that they’re “going to be watching the next two games as closely as we’ve watched any games this year.”

Those contests come Saturday night in St. Louis and Sunday back home against the Florida Panthers. And, with the NHL trade deadline a week from Monday, anybody not named Sidney Crosby, Evgeni Malkin, Kris Letang and Marc-Andre Fleury is fair game in the talks GM Jim Rutherford has under way.

“When you’ve lost a couple games and not played right, everyone starts [getting] nervous – coaches, players, organization,” Malkin said. “It’s not bad, but it’s not good. I believe this team is good guys, good players. Just support each other, relax and we can come back.”

A key part of the problem is the Penguins’ failure to score, as they’ve found the net just once in each of their last three games. Starting netminder Fleury – the team’s clear MVP this season – has deserved better, allowing just six goals in his last six starts but losing three of them.

And a power play that threatened to break records at the start of the season, when it was converting at a 47 percent clip, has now tied a franchise record on the other end of the spectrum by going nine games without a goal. That’s an almost astonishing feat given its world-class personnel, with which the coaching staff has been tinkering – most notably, separating star forwards Crosby and Malkin – to try to find a spark.

“Whatever unit scores, I think that’s the best,” Crosby said. “We can dissect units or personnel; there’s times when we have great looks, great chances and don’t score. There’s times where we struggle to get in the zone, make one good play and everything’s good with the power play. So, you know what? Just [score] goals. I can sit here and we can talk, analyze, [but] that’s up for everyone else to do. We’ve just got to find a way to score on it.”

Head coach Mike Johnston won’t have the final word on any upcoming changes to his roster – but, following Thursday’s loss to the Blue Jackets, he took accountability for addressing what he could, starting with the team’s frustrating inconsistency.

“The inconsistency in the team – and I’m speaking, obviously, from my perspective as a coach – is the thing that concerns me,” Johnston said. “You look at our games against Detroit, Chicago … [those] details in our game have to be there on a nightly basis, and they aren’t right now. Our starts have been great, but our start wasn’t very good tonight, and we can’t have those types of inconsistencies in our game.

“It’s the details, the habits and the inconsistencies that we need to correct. And I have to address the things that I can control as a coach, so that’s on my shoulders to address that. Other things that happen around the organization, we’ve got capable people to make other decisions as they need to be made.”

The Penguins have the next 48 hours to step up – perhaps luckily, both weekend games come against non-division opponents, against whom they’ve gone 25-6-5 – or buckle under the pressure of their jobs being on the line.

Malkin, for one, hopes they’ll find a way to relax and play their game.

“Just try not to think about that,” he said. “Maybe [a shakeup] happens; maybe not. Just play right. I think we have a good team to play playoffs and have a chance to play Stanley Cup Finals. If we play right, we win.”