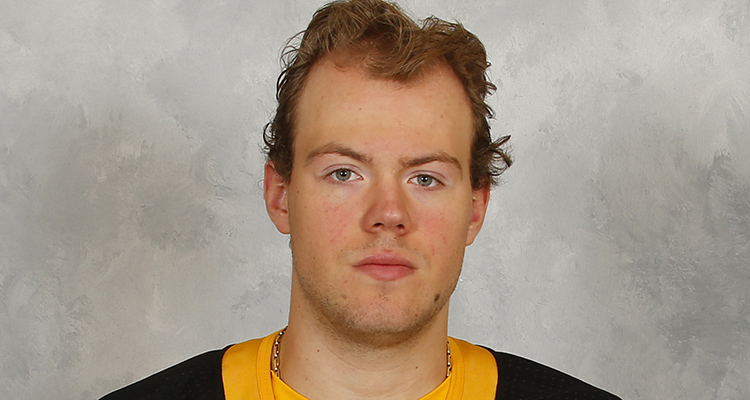 CRANBERRY TOWNSHIP, PA – SEPTEMBER 14: Daniel Sprong of the Pittsburgh Penguins poses for his official headshot for the 2017-2018 season on September 14, 2017 at the UPMC Lemieux Sports Complex in Cranberry Township, Pennsylvania. (Photo by Joe Sargent/NHLI via Getty Images)*** Local Caption ***

After laying another egg Friday night in Raleigh, the Penguins are turning to a spring chicken with the recall of Daniel Sprong.

Friday marked the second time in as many pairs of games that Pittsburgh followed an inspired, come-from-behind win over the rival Columbus Blue Jackets by coming out flat in their next outing.

Last Thursday’s 3-2 shootout win over Columbus seemed like it could be a momentum changer in lackluster Penguins season. Then the Anaheim Ducks came to town and sent Pittsburgh into the holiday break with a 4-0 shutout – their fifth loss in seven games.

The Blue Jackets were back at PPG Paints Arena Wednesday and, after spotting Columbus 2-0, 3-1 and 4-2 leads, the Penguins again found a way to take the game to overtime and emerge with a shootout win. Evgeni Malkin led the charge with three points and a shootout goal.

“We found ourselves down, but we had a lot of positive attitude, we had good contributions throughout, and I thought everyone stepped up and brought their game to another level,” said defenseman Brian Dumoulin. “Now we’ve got to continue to do that through the stretch. This is a game we can build on and, obviously, that’s something we need to do.”

Dumoulin delivered at Carolina Friday, opening the scoring with a quick shot just 4:34 in, but that’s all the offense the Penguins could generate in a 2-1 loss to the Hurricanes.

“They got pucks to the net in traffic and made plays, and we just kind of hoped for a break,” Dumoulin said.

“We’ve got to be able to reenergize and try to dictate the terms out there, and I don’t think we did it enough,” said head coach Mike Sullivan. “I thought we had a good start; we accomplished what we wanted in that first period, but there was a letdown in the second period.

“They’re a young team that can really skate. They didn’t try to make fancy plays through the neutral zone; they didn’t try to force things. They played north-south, straight ahead, put the puck behind us and forechecked. We had to try to turn the table on them by spending time in the offensive zone, and we needed to do a better job as a group handling the pressure.”

Things couldn’t be much worse for the Penguins’ offense. A team that boasts players like Malkin, Sidney Crosby, Phil Kessel and the currently sidelined Kris Letang ranks No. 30 of 31 NHL clubs in even-strength goals. They have more shots per game than any team (34.79) but their 5-on-5 shooting percentage? Dead last at 5.1 percent.

Pittsburgh’s 5-on-5 save percentage isn’t any better, tied for last with Ottawa at .904. With stats like that, it’s little wonder they’ve dropped out of the playoff picture, with their 41 points trailing the second wildcard spot by three.

While the Penguins were losing in Raleigh, 20-year-old winger Sprong was leading Wilkes-Barre/Scranton to a 5-1 win over the Hartford Wolf Pack with his second hat trick of the season. Sprong’s 18 goals rank No. 2 in the AHL, while his 28 points in 29 games are in the top 15. He’s scored six points (3G, 3A) in his last two games.

If that sounds like a player who might be able to help a big club that’s scored just 19 times in their past nine games, well, the Penguins think so, too. They recalled Sprong in time for Saturday’s 2 p.m. practice in Detroit, and he’ll see his first NHL action of the season there on New Year’s Eve.

The Penguins had planned to let Sprong develop his all-around game in the AHL for as long as possible. Now, with the club suffering not only from a lack of goals but a rash of injuries, they’re looking to him for an offensive spark.

Sprong’s call-up also gives GM Jim Rutherford the chance to better assess his internal options before pursuing a trade to shake things up. In either case, the Penguins believe the players on their current roster have more to give.

“We’ve just got to make sure that we stay determined, get more focused and control what we can out there to try to get the result,” Sullivan said. “Really, at the end of the day, that’s the approach all of us have to take. Try to play the game the right way and, if we do that, I believe this team will find success.”