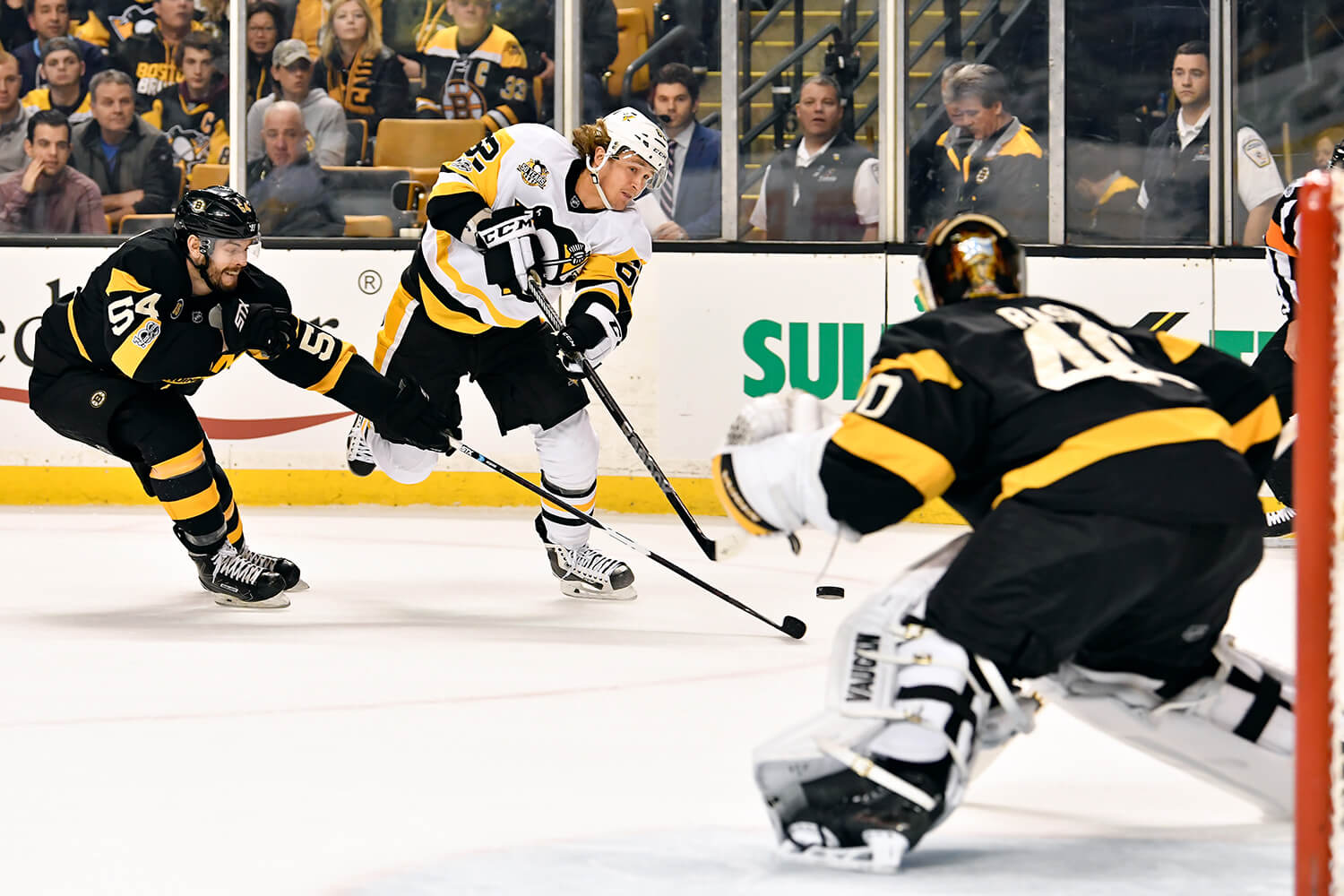 They’re called the Penguins, but the defending Stanley Cup champions have come into March more like a lion.

After opening the month with a 4-1 loss at Chicago, Pittsburgh has gone on a five-game tear at what might be just the right time. And they’re doing it without seven regulars in their lineup.

When the Penguins steamrolled the Vancouver Canucks with a 48-shot effort on Saturday – a 3-0 win kept closer than it should have been by the brilliance of goaltender Ryan Miller – their man-games lost this season climbed to 177. Here’s who they’re missing:

The Penguins’ injury problems this year haven’t even come close to those of the Canucks (310 man-games lost as of March 11) or Edmonton Oilers (283). In fact, they’re only No. 13 overall in that category. But they’re the worst off among current playoff teams in terms of the cumulative quality of their injured players, based on driving possession and average minutes played, and Letang leads that impact statistic by a wide margin.

To fill the gaps, the Penguins have summoned defensemen Chad Ruhwedel and Cameron Gaunce off the bench and up from Wilkes-Barre/Scranton, respectively. Forward Carter Rowney is back in the lineup, and 22-year-old Oskar Sundqvist got a call-up.

“Sunny’s played two solid games for us,” Sullivan said. “He’s a good player, an NHL-caliber player. I think there’s a little bit of an adjustment when a player first comes up from the American league with the pace – not just the physical speed but the mind speed, the decisions that you’ve got to make quicker.

“I think he’s adjusting quickly, and he’s shown he can play at this level. We trust him. We used him on the penalty kill tonight; we can use him in defensive situations. His biggest strength might be his defensive capability.”

Winger Tom Sestito was originally called up to replace Hornqvist on Wednesday – a controversial move given Sestito’s reputation as an enforcer and the ugly nature of the last meeting between the Penguins and Jets – and was promptly suspended for four games after boarding Winnipeg defenseman Toby Enstrom.

Yet the Penguins continue to get it done.

“We have,” Sullivan said. “I think our guys are playing hard; we’re competing hard. Sometimes, when you go through some of these adversities, it can galvanize a group, and that’s our hope. We’ve got capable people in the lineup. We’re fortunate; we’ve got a deep organization. Guys are having an opportunity to play more significant roles, more significant minutes. We’re getting solid goaltending from both guys, and it seems like everybody’s chipping in in some capacity to help us win.”

Defenseman Justin Schultz, who gambled on a one-year, $1.4 million contract to prove himself this season, is the league’s No. 4 scorer among defensemen. Trade deadline additions Ron Hainsey and Mark Streit are helping to solidify the blueline with veteran experience and special-teams expertise. Wingers Conor Sheary and Jake Guentzel are finding magic alongside Sidney Crosby, bringing speed and hockey smarts that complement the captain’s game.

“We all like to play quick down low and give-and-gos, and I think when we get on their defensemen and make it tough for them to make plays and keep it in their own zone, that’s when we’re at our best,” Sheary said. “I think we’ve been getting to that the last couple games.”

Crosby leads the league in goals and sits three points behind Edmonton’s Connor McDavid for the scoring title, while the team’s other star center, Evgeni Malkin, quietly challenges for both at just two goals and one point behind Crosby.

And, in perhaps the Penguins’ best trade deadline move, the decision to keep Marc-Andre Fleury and finish the season with two starting-quality netminders is paying off. Matt Murray delivered his second shutout against the Canucks in as many games Saturday, stopping all 27 shots he faced, while Fleury turned aside 40 of 42 in Edmonton Friday to give his club the chance to emerge with a 3-2 shootout win.

That doesn’t create a goalie controversy, but a tandem – one Sullivan calls the best in the NHL.

“At the end of the day, we both feel like we can get the job done,” Murray told Root Sports after Saturday’s contest. “We both support each other. We’re both trying to win games for the team. And whoever’s in net, we feel like we can do that. We don’t worry about the noise or the nonsense; we just take pride in doing our job when it’s our turn to go, and support each other when it’s not. It’s working out well for us.”

With a depleted roster, the Penguins’ constant focus on making good decisions with the puck becomes that much more important.

“We’ve got to make sure we play a smart, efficient game,” Sullivan said. “We can’t chase the game by forcing things that aren’t there. That’s usually our challenge with our group on a game-by-game basis, making sure that we make good decisions, because we have guys that instinctively want to make plays.

“We’re a coaching staff that believes in not taking the stick out of their hands; we want them to make plays when they’re there, but we’ve got to recognize when the plays aren’t there to be made and force teams to play 200 feet. I thought we did a much better job of that [Saturday].”

It was good enough to move within a single point of the Washington Capitals for the top spot in the Metro Division, Eastern Conference and NHL overall as the regular season enters its final stretch.

“This is a big portion of the season,” Sheary said. “The last 10 or 15 games here is when you gain your ground and the seeding kind of takes place. So I think we’re definitely watching when they’re playing, and I’m sure they’re watching when we’re playing. We’re just going to keep trying to gain points in every game.”