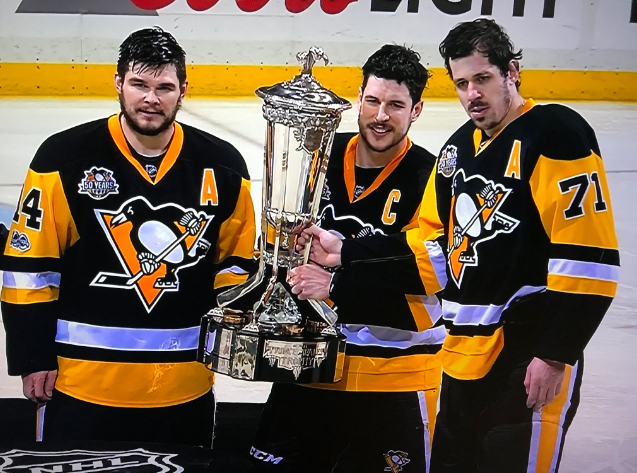 They don’t call Ottawa the Pesky Sens anymore, but the Pittsburgh Penguins probably thought of their opponent that way more than once during the Eastern Conference Final.

And, fittingly, after winning Game 6 at home to force Game 7 in Pittsburgh, the Senators were never peskier than they were in Thursday’s deciding contest.

After a fiercely contested first period where neither side got much room to do much of anything offensively, it felt like a single goal might be all it took. And it took until halfway through regulation time – 9:55 of the second period, to be exact – for someone to score it.

That someone was Penguins winger Chris Kunitz, with some pretty work from Conor Sheary, who returned to the lineup after spending two games as a healthy scratch.

What a damn play by Sheary to spring the Kunitz goal pic.twitter.com/LeCpxO6hWM

But the PPG Paints Arena crowd was still cheering when, 20 seconds later, Senators’ captain Erik Karlsson set up Mark Stone the other way.

The Penguins got the lead back when, after killing two Senators power plays on the night, they finally got their chance with the man advantage. Again a new addition to the lineup stepped up – this time defenseman Justin Schultz, back from four games with an upper-body injury, with a long-range wrist shot at 11:44 of the third period.

“Power plays are few and far between in the playoffs, and the deeper you go, the less you get,” Penguins head coach Mike Sullivan said. “When you have the opportunities and you can capitalize, like our group did tonight, it helps your team win games.”

But the Senators weren’t done being pesky. Again, they had a response. It came just less than three minutes later, when Karlsson clanked a shot off the post and Ryan Dzingel was there to bury the rebound – and celebrate the magnitude of tying such a high-stakes game accordingly.

At the end of regulation, the Penguins led in shots, 33-25, but nothing had been decided through 60 minutes. It wouldn’t be decided after 80 minutes, either, despite the Penguins carrying the play with eight shots to the Senators’ two, including this one from forward Phil Kessel that ended up on the top of the net. The replay shown to the home crowd looked like a goal, prompting Sullivan to ask for an explanation and booing fans to toss a rally towel or two on the ice.

The Penguins stuck to their game plan, trying not to get frustrated about the missed opportunities.

“It’s a nerve-wracking game,” said Penguins captain Sidney Crosby. “With the way they play, you can feel comfortable with your game, you can generate chances, but they only need one going back the other way to score. Playing against a team like that, you just have to stay with it and stay poised.”

But, as close as the Penguins were coming, Ottawa goalie Craig Anderson was following up his 45-save performance in Game 6 with another gem.

“He was unbelievable,” said Penguins goaltender Matt Murray, who celebrated his 23rd birthday Thursday. “I thought that whole team was playing inspired hockey.

“Definitely knew it was going to be tough to get any by him but, at the end of the day, it doesn’t change my job. I just tried to hold the team in it as long as I could. I always have confidence in the team in front of me that they’re going to score goals.”

In the second overtime, finally, they did. Each team had had one shot before Crosby set up Kunitz for a shot that went five-hole on Anderson at 5:09.

Oh… And that double OT goal was scored by CHRIS KUNITZ! With assists to Sidney Crosby and Justin Schultz. pic.twitter.com/dkkgEdL926

And with that, the Penguins punched their ticket to their second Stanley Cup Final in as many years, keeping their hopes of repeating last year’s championship alive. They’ll host the Nashville Predators starting on Monday.

“Sometimes you get lucky when you put one on the net,” said Kunitz, whose multi-goal game was his first since Nov. 1, 2014. Then the pending free agent turned reflective.

“Never knowing if you’re going to get another chance to come this far; you never know if you’re going to play on this ice again with this team, so you’ve got to make sure you make that last as long as you can. It’s not a lot of fun thinking about the future when you want to be here and you want to be playing with your teammates. Sometimes it comes down to luck for a goal going against you, and your season’s over.

“I’m happy that it’s not over for us yet. We’ve got another challenge in front of us, and another chance to win another Cup.”

For the Senators, a Cinderella season in which they surpassed every expectation came to a sudden, difficult end.

“It’s beyond pride,” said head coach Guy Boucher. “They have a lot of going through adversity, a lot of building. A lot of individuals grew to a level that, I’ll be honest with you, I never thought they’d get there in a few months.

“The reason why we’re here is because it was a team, and every player at some moment or another had a terrific contribution. How they’ve supported each other and how they were able to pull through, and a lot of people thought they weren’t going to be able to. The entire team has displayed a lot of courage, a lot of resilience and a lot of caring. And that’s why it’s very tough.”