Boston, MA -If someone told you they witnessed a true gallimaufry at the TD Garden Tuesday night you would be as confused by the term as the person who witnessed the actual game was. A 5-4 shootout loss by the Boston Bruins, their second such loss in a row, was a confused medley indeed. Three periods, plus extra time, and completely different results for each frame. A scoreless first, a four goal outburst for the Bruins in the second, a Panthers four goal response in the third, a scoreless five minute overtime and four rounds of a shootout. At one point even the Garden’s lights went out! All culminating in a shootout win for the visiting Florida Panthers, their second straight win. Mike Hoffman‘s snipe on Tuukka Rask in the fourth round of the shoot out would be the difference.

The opening period was lame in comparison to the second and third periods. The Bruins outshot the Panthers 7-5 for the period. The Bruins had two solid scoring opportunities to Florida’s one. Matt Grzelcyk sent a slap pass towards the Panther goal that Charlie Coyle directed just wide of Sergei Bobrovsky just after the midway point of the period. A few shifts later Coyle set up Danton Heinen out front, but the winger’s shot also went wide.

Florida’s best bid was a centering pass from the right wing that Aleksander Barkov redirected on Rask, but the veteran goalie was there to make the save.

Charlie McAvoy was called for High-Sticking at 19:48 when he was tangled up with Barkov behind the Bruins net. The penalty would carry over to the second period.

The Panthers were on the prowl to open the second. Just as Hoffman was teeing up a slapshot from the slot the TD Garden lights went out, a la Game Four of the Stanley Cup Finals in 1988. Florida never regained pressure when play resumed. The Panthers had another power play at 4:21 when Patrice Bergeron was sent off for Holding. Hoffman set up Evgenii Dadonov with a pass down low but again Rask was there to turn the shot aside.

After weathering the Panthers power plays, the second period was all Bruins as they peppered Bobrovsky with 16 shots, four of which found the back of the Panther net.

At 11:55 David Pastrnak opened the floodgates when he smoked a wrist shot past Boobrovsky from the left circle. Pastrnak looked as if he was going to dish to Brad Marchand on his right but fired the puck on net catching Bobrovsky off guard for the 1-0 lead. 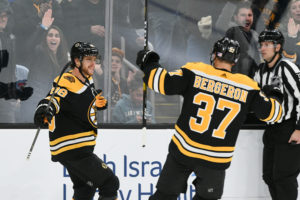 A Holding penalty at 15:33 to Florida’s Dryden Hunt gave the league’s number one power play unit their first opportunity of the game. They wasted little time as Anders Bjork took a David Krejci pass in stride at the right dot and wristed the puck past Bobrovsky’s glove side at 17:16. 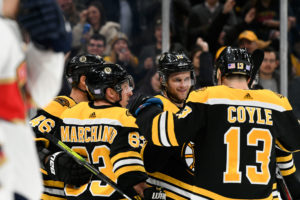 As the second was winding down Boston continued to apply pressure on Florida. Nifty offense zone passing by Zdeno Chara, Danton Heinen and Krejci led to the Bruins fourth goal. Krejci’s attempt off of Chara’s pass was gloved down by Bobrovsky, but Chara had followed up the play and roofed the puck at the side of the Florida goal at 19:31. The goal was Chara’s third of the year. His goal celebration drew chuckles from the healthy scratches watching from press row.

Boston outshot Florida again 16-7 for the period with the Panthers still in control of the face-off circle 14-9.

Florida coach Joel Quenneville started the third period with back-up goalie Sam Montembeault in goal. The 23 year-old was lights out in his 25 minutes of action, turning aside all 15 shots he faced.

Just fifty seconds into the action Aaron Ekblad blasted a Keith Yandle feed past Rask giving the Panthers life. Boston’s Nordstrom was stick-less as Ekblad’s slapshot from the left dot beat Rask at the far side post.

At 1:02 Vincent Trocheck was sent off for Elbowing Pastrnak. After the whistle Marchand jumped Trocheck in retaliation. The two were assessed Roughing penalties, resulting in five on five play. The Bruins had pressure but Montembeault was steady.

Chris Wagner was called for Slashing at 3:49 giving the Panthers another crack at the man advantage. Jonathan Huberdeau walked in from the blue line and fed Frank Vatrano for the one-timer in the slot. 4-2 Bruins.

Another power play at 8:32, this time Kuraly for Hooking, gave Florida a man advantage.   Yandle had two shots on Rask turned aside, then Barkov fanned on a one-timer down low. At 9:43 Florida’s Hoffman took a Yandle feed, walked in from the right face-off dot and beat Rask on the backhand bringing the Panthers to within a goal.

Heinen set up Coyle at the Panthers post but Montembeault was there for the pad save.  A Noel Acciari penalty for Tripping at 13:32 gave the Bruins another power play opportunity but Montembeault stopped a Pastrnak slapper from the blue line and then the Marchand rebound attempt from the low circle.

Just as Montembeault reached the Panther bench for the extra attacker, local boy Yandle tied the game for Florida at 18:21. Barkov had a rush on Rask, the Bruins goalie made the initial stop. The rebound was just sitting at the top of the crease, as Florida’s Huberdeau held Bergeron’s stick, Yandle swooped in and wristed the rebound up under the crossbar. Boston 4, Florida 4. 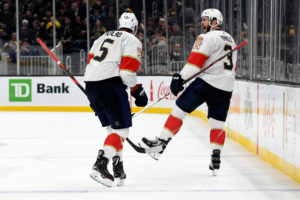 In overtime Marchand had a breakaway attempt thwarted by Montembeault. Pastrnak had a blast from the left circle that the relief goalie stopped. For Florida, Hoffman had a mini-breakaway but Rask gloved down the shot. Then Trocheck had a chance that Rask didn’t see, the puck just hit him.  After three periods and one overtime the Bruins outshot the Panthers 38-29. Florida won 53% of the face-offs, they outhit the Bruins 27-20, and they blocked 14 shots to Boston’s 6.

In the shootout Florida’s Vatrano took a wrist shot that was saved by Rask. Then for Boston Wagner was denied by a Montembeault pad save. Trocheck for Florida scored high blocker side on Rask, then Marchand’s writer was easily stopped by the Panthers goalie. Rask returned the favor on Huberdeau’s attempt. Coyle needed to score to keep the Bruins alive and he did on a bar down wrist shot in close.

The penultimate round seen Hoffman snipe the puck over Rask’s glove as the goalie went into a split. McAvoy’s tying attempt was turned aside by Montembeault as the Panthers raced off their bench to celebrate. The 17,850 in attendance must have left TD Garden feeling frowsy after the turn of events they witnessed in the final forty-five minutes of action. 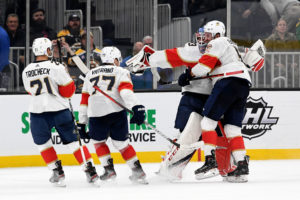 Nov 12, 2019; Boston, MA, USA; The Florida Panthers celebrate their win over the Boston Bruins during a NHL game at the TD Garden. Credit: Brian Fluharty

“Things got compounded,” said Bruins coach Bruce Cassidy after the game. “We lose a stick on the first goal, we don’t recover, it’s a poor angle shot, but a good shot. You still got to get your game back together. We take some penalties, it seemed like we took a lot of marginal penalties tonight. We didn’t kill them… Guys throwing pucks to the middle of the ice. We’re going to have to sit down with them and address the penalty kill and those situations, how we broke down and get better in that area.”

Cassidy spoke highly of Montembeault’s performance. “I do give their goalie a lot of credit for coming in cold. We missed open nets on the power play, he made some great saves.”

“That was the improbable one,” said Quenneville about his team’s win. “We were fine, 0-0, then we lost our composure there and gave up four quick ones at the end there. We weren’t happy with the way the whole second period went. Scoring early on the first shift of the third obviously gave us a bit of a lift there. We got a little bit of excitement off of it. The power play come up with a couple of big ones.”

Quenneville was also heaping praise on Montembeault. “Monty came in a played a great  third period. Great response. Made some key saves, they were around our net, there were some dangerous times late too.”

“I liked how he handled that game. Being put in that situation where you’re watching and all of a sudden you’re in the game, you don’t think anything’s going to happen then next thing you know you’re in a shootout. So I commend him on how the stage got bigger as he was out there and he handled it very composed.”

The Bruins are off until Friday when they travel to Toronto to take on the Maple Leafs at Scotiabank Arena at 7:00 pm. The Panthers meanwhile host the Winnipeg Jets on Thursday at 7:00pm at the BB&T Center in Sunrise, FL.