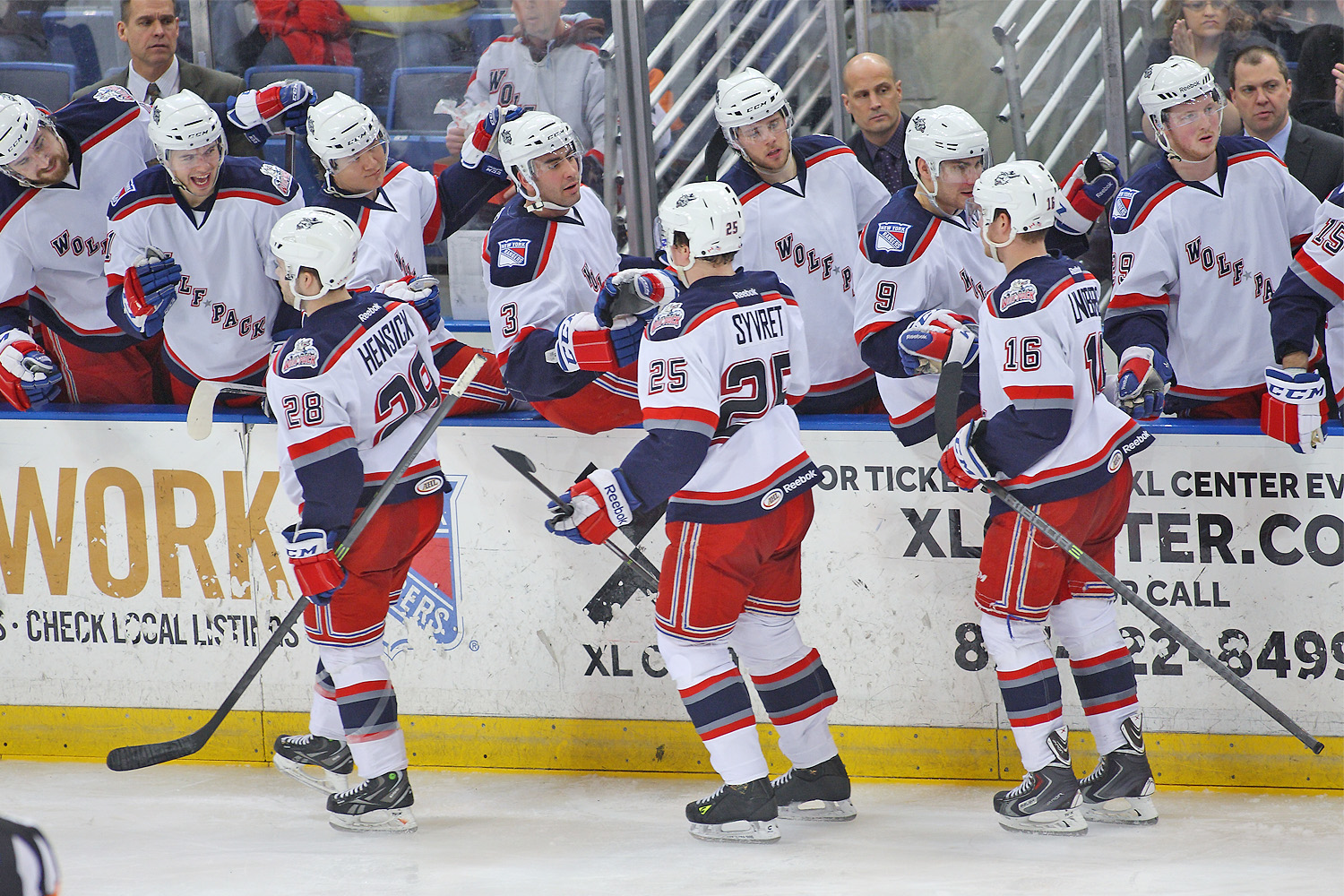 Hartford, CT- After the Hartford Wolf Pack’s Ryan Malone brought the Pack (16-10-2-2) to victory last week in a grueling over-time victory against the Lehigh Valley Phantoms (13-11-4-1), the team and their fans were on a high. In combination of an incredible OT win and day after Christmas joy, the XL Center was absolutely booming, completely crowded with cheering fans.

With head coach Ken Gernander finally returning from quarantine; the Pack took the ice Friday night with their heads high, prepared to take on their regional rival the Springfield Falcons (21-9-1-0). This is the second time that the Wolf Pack has played the Falcons this season, the first time resulting in a heartbreak loss for the Pack in a shoot-out and with that being said it was quite clear that the Wolf Pack would be out for blood this game.

At the drop of the puck the back began their fight, scoring early at 4:33 by Malone off of a rebound from teammate Mat Bodie. However with the early score, came early tension, a problem that the Wolf Pack has seemed to be having lately. Immediately following the goal, a long string of penalties plagued the Pack, giving the Falcons a couple of power play opportunities – fortunately none were successful. Although they maintained the lead for nearly the entire first period, Cedrick Desjardins, with only about 12 seconds left, gave a goal over the top shelf shot by the Falcon’s Marko Dano, which tied the game up 1-1 and ended the first period.

Though the Wolf Pack did seem to have control during the first, their shots on goal were weak; the Falcon’s dominated the shots on goal with 11, compared to 5 by the Pack. Bodie commented in between periods that “it’s something [they] really need to work on, really taking the shots and trying to capitalize on each play.”

The second period started off well for the Wolf Pack, kicking it off with a power play at 0:34, and another at 2:14. However, both plays were unsuccessful and did not result in any tie breaking goals. Desjardins was doing phenomenal, saving each shot coming his way. At 6:44, a huge collision on the Wolf Pack end left Desjardins crawling on the ice, badly injured it appeared, he was helped off the ice by the team’s trainer, and rookie goalie Mackenzie Skapski stepped right in, he says “It’s no problem (coming off the bench cold). It’s part of the business, you just need to come in calm, cool and relaxed.” The period pressed on with back and forth penalties, none resulting in scores. The second period ended still in a stalemate.

Continuing into the third Skapski was doing a fantastic job on goal, blocking shots left and right. But overall, as we’ve come know when it’s a tie in the third, games become blood baths. The period was predominantly filled with penalties and unsuccessful power plays. Later Coach Gernander would remark, “We have work to do on the power plays. We’re not in-sync, it’s more like adlibbing.” The game headed straight into OT, but even with Springfield’s 37 shots on goal, and aggressive play- it wasn’t enough. The Wolf Pack and the Falcons found themselves in the exact same place they had in the first game, a shoot out.
Skapski put up a huge fight in his efforts, but one goal managed to get past him. “It was frustrating, usually I don’t miss the saves in a shootout,” he said, but Falcons’ T.J. Tynan successfully scored resulting in the Falcon’s second shoot out win against the Wolf Pack. It just seems that the Pack have major problems against Falcons’ goalie Anton Forsberg.

Attendance 4,072
Injury Report: Joey Crabb remains out with the mumps, Justin Vaive will be out about another week
Coach Ken Gernander returned to the bench tonight

3 Stars of the Game