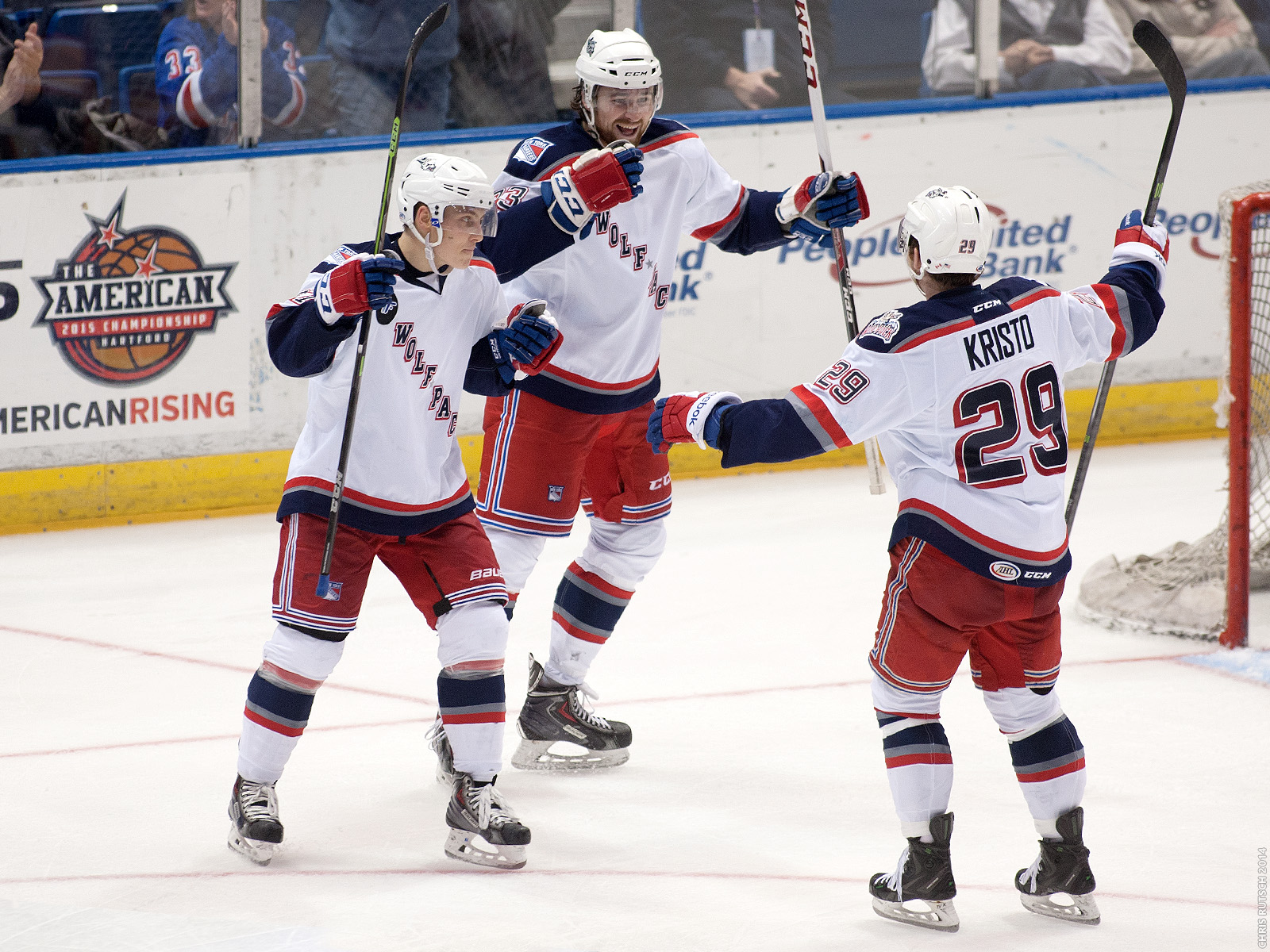 Pack Claw Back To Victory

Hartford, CT- After coming out last night to play their regional rival, the Springfield Falcons (21-9-2-0) and losing in another heartbreaking shootout, the Hartford Wolf Pack (17-10-2-2) were back again at the XL Center to play the Portland Pirates (15-15-1-0). With two of their stronger players, left winger Justin Vaive, and as of last night, goalie, Cedrick Desjardins, out with injuries the Wolf Pack could have been a bit nervous. However, ask any member of the Pack about rookie goalie Mackenzie Skapski and the words “calming influence” always seem to come up. Lately struggling with their power play unit and ability to generate scoring opportunities, the team was really looking to get it together tonight.

Hartford appeared to get off on the right skate. Starting off aggressively they clearly meant business, and they made it quite clear with an early deflection goal by Joey Crabb, who’d just returned to the team after being quarantined for the mumps. Gaining quite a few power plays, Hartford still could not capitalize. They struggled entirely and as Ken Gernander, Wolf Pack head coach, said after last night’s game that “[the team] need to become in sync with one another”.

Coming back for the second, the period got off rocky for the Wolf Pack with Oscar Lindberg being called for closing his hand on the puck at 2:18, giving the Pirates got an immediate power play. However, the Pirates were unable to tie it up, and the Wolf Pack were quick to redeem themselves with a strong slap shot by Mat Bodie at 5:30. Bodie has been playing well and really executing as of late. The young defenseman seems to really be coming into his own as of late. He said post-game, “I’ve just been sticking to the game plan, and try to play as a team. When you play as a team good things happen.”

Again at 8:54, Shawn O’ Donnell, assisted by Ryan Bourque and Chris Mueller, deflected a quick goal. Hartford had a huge 3-0 lead and was really looking good tonight. But were they getting a bit too confident? They slipped up a little with hooking and holding; giving the Pirates two big power plays; one of which carried into the start of the third.

Unfortunately for the Pack, the penalty that carried over resulted in a quick goal for Portland at 0:36. The Pack weren’t going to let that ruin their lead; they were quick to come back and Aggressively took control over the game. Shawn O’Donnell came close to firing in two great goals, but one was shut down by Pirates’ goalie Mike McKena and the other slid past the goal line. As the period pushed on, the Wolf Pack still managed to maintain their lead and sealed the deal. Definitely a big redemption for the team, and just the type of play they had wanted desperately to pull off.

“The game was a lot closer to the style of hockey we’ve been wanting to play, it’s just those little things that we need to stress on and be perfect,” Gernander said, but he truly appeared to be proud of the team’s comeback and play tonight.

Once again Gernander, along with other players made an effort to mention Skapski’s spectacular play and improving skill. Bodie commented as well that it’s always a positive thing to have Skapski in the net, and O’Donnell made more comments about the rookie star. In regards to Desjardins and his injury last night, the Wolf Pack are still waiting on MRI results, but it’s starting to look like he could miss at least a few games.