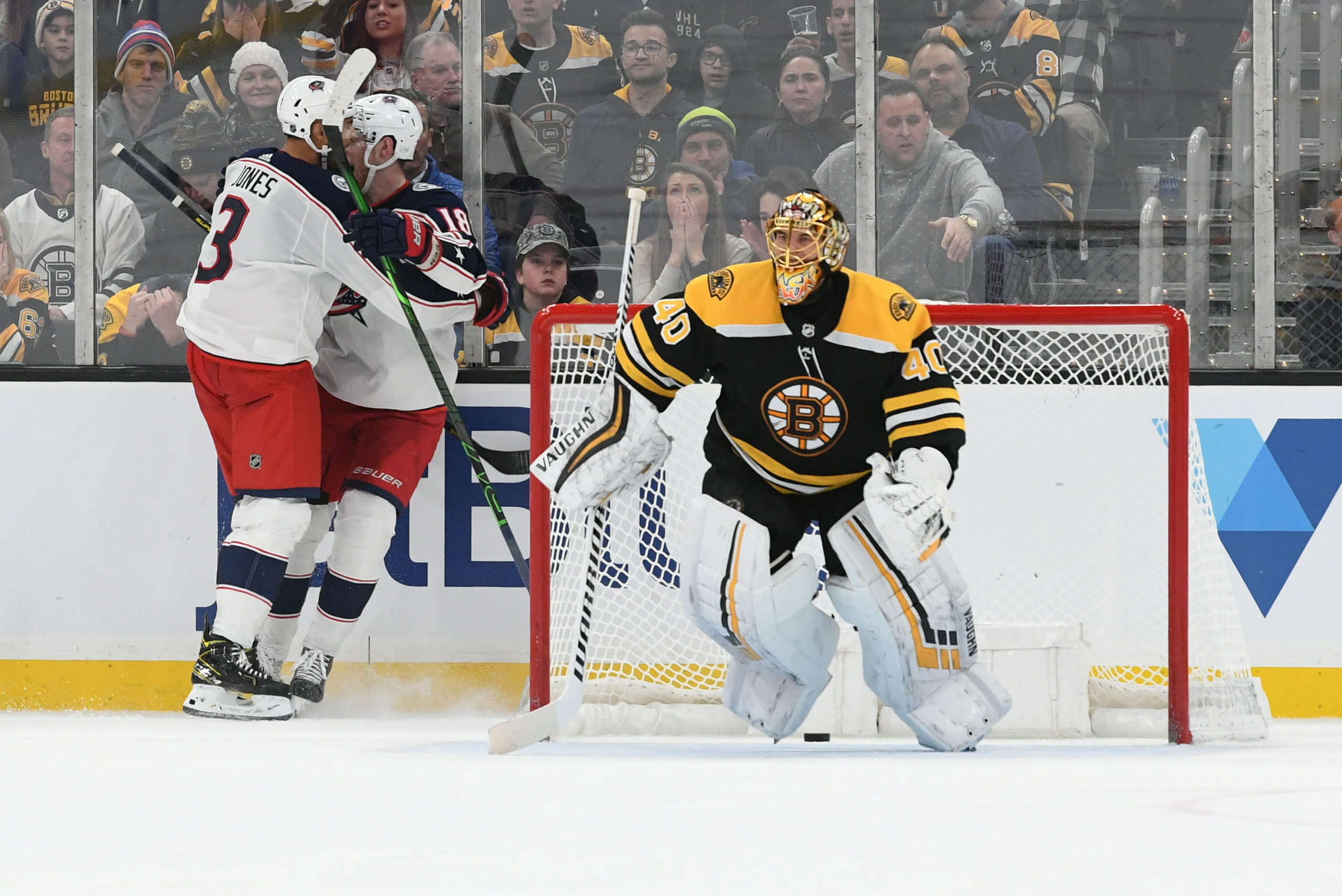 Boston, MA – With twenty seconds remaining in regulation, the score remained tied between the Boston Bruins and the Columbus Blue Jackets. There was plenty of time for one more solid rush for the Bruins to keep this game from needing extra time. Sean Kuraly won the face-off in the defensive zone, and the Bruins managed to generate some offense but were unable to get a shot on net.

Boston was going to overtime for the fifth time in nine games.

Bruce Cassidy rolled out Charlie McAvoy, David Pastrnak and David Krejci to begin the extra time. It would take less than a minute for the Blue Jackets to find the back of the net; Pierre-Luc Dubois scoring the even-strength goal.

“We got a real good group of leaders in here,” said McAvoy on the level of frustration within the team. “They kind of keep us in check, not much panic in here. It’s frustrating for sure, but I think we’ll break through. We just got to stay on it, capitalize on our chances, and not give up the big ones.”

17 seconds into the opening period, it appeared that Columbus had opened the scoring and that the Bruins would need to climb out of a whole to begin the second-half of the season. Bruins forward Sean Kuraly lost the puck attempting to clear the zone, and the puck was picked up by Columbus forward Gutav Nyquist on the rebound and shot it over the glove of net-minder Tuukka Rask. However, Boston challenged the play for goaltender inference and the goal was overturned.

The physical tone of the game was set early, as forward Joakim Nordstrom had a heavy hit on Dean Kukan three minutes into the first period. The play was followed by Kuraly going after Columbus forward Riley Nash who was looking to defend his teammate.

Columbus outshot Boston 9-8, as well as out-hit the Bruins 14-9. The only advantage for the Black and Gold came from the face-off dot, as the Bruins controlled it going 6-for-9.

Prior to his three-game absence, Torey Krug had seven points in his last seven games. The 28-year-old defenseman picked where he left off against the Columbus Blue Jackets Thursday night.

Krug’s presence on the man-advantage was surely missed, as the blue-liner picked up where he left off point-wise. On their second power play opportunity of the game in the second period, Krug received the puck from Bergeron’s face-off win. He then passed it to an awaiting David Pastrnak at the blue line who then one-timed it under the cross bar of Matiss Kivlenieks. The goal was Pastrnak’s 30th of the season. It was also the only goal that Boston would score that night.

With 44 seconds remaining in the second stanza, Bruins captain Zdeno Chara was assessed a holding penalty. The penalty would carry into the third period with Columbus getting the opportunity to tie the game. While the Blue Jackets did not score on the man-advantage, they were able to tie the game 2:06 into the final period. Sonny Milano was able to get the puck past Rask to even the scoring and eventually force the overtime.

“I’m sure no one is pleased,” said Cassidy on how the team feels after back-to-back shootout and overtime losses. “It’s another lead going into the third period, and we were unable to close out. It’s frustrating. Again, they did a great job around their net and blocking shots. As for the overtime, some of it we got to smarten up, can’t get caught diving down low, those puck battles away from your net. If you don’t make a play at their end, you got to make sure you put yourself in a better spot defensively to defend the rush or get off the ice. That’s cost us a few times, so at one point you got to learn from those mistakes.”

“[We] just got to be smarter and hang onto the puck,” said Krug. “It seems like some teams do that to us where they are hanging onto the puck, and getting out chances at the appropriate time. Games past, I feel like we can out-change the other team a little bit better, and be respectful of our changes. Obviously we got to capitalize on our chances . That’s what happens. Kind of a crap-shoot at times.”