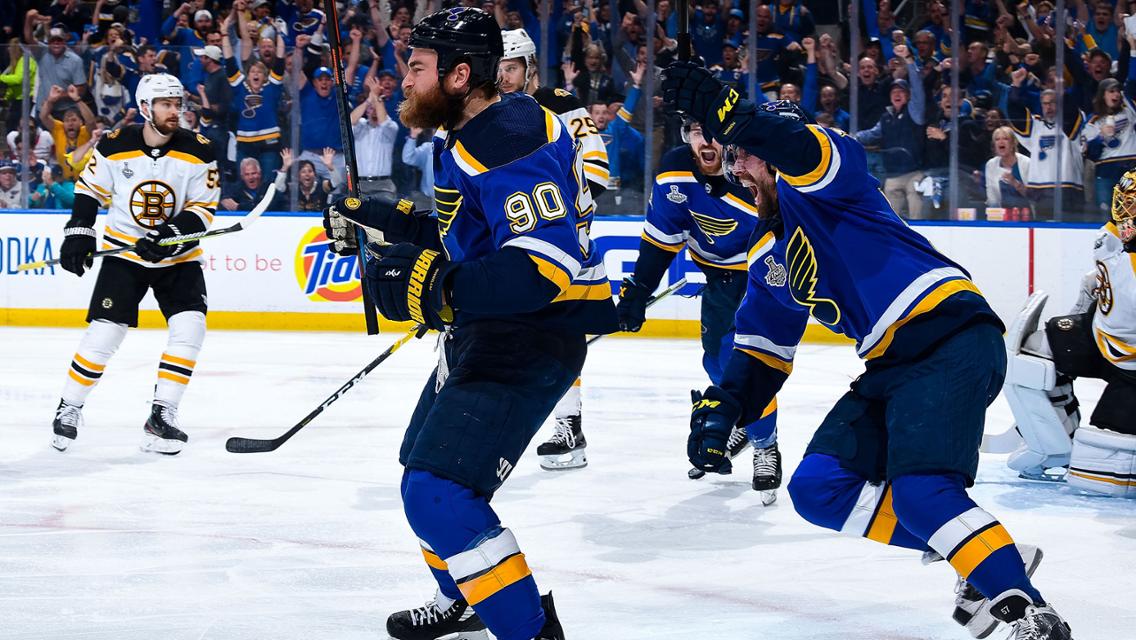 St. Louis, MO- Through Saturday night, St. Louis had hosted seven Stanley Cup Finals games. Three of them came against Boston. All seven were losses. All three against the Bruins were by five goals or more. The most recent, a thorough 7-2 demolition in their first Finals home game since Richard Nixon’s first term as President. Craig Berube’s team, as they had against Winnipeg, Dallas, and San Jose, faced an uphill battle to climb back into the series. Fortunately, the Blues had plenty of life and gave the crowd plenty to cheer for on Monday night.

Ryan O’Reilly only took 43 seconds to break the ice. The Blues’ captain wrapped the play around the net and deposited it inside Tuukka Rask’s skate for an opening salvo and a 1-0 lead. St. Louis continued to push the pace and press the Bruins but cracked on their own defensive end. Bruin captain Zdeno Chara fired a shot on Jordan Binnington and the rebound bounced to East Weymouth native and Boston University alum Charlie Coyle, who proved his hometown team smart for acquiring him at the trade deadline. Coyle had only two goals in 21 regular season games in black and gold. In as many playoff games, Coyle boasts nine goals, tied with Patrice Bergeron for the team high, after punching in the equalizer 13:14 into the game.

St. Louis resumed their spot of dominance and craked Rask again in the frame. Alex Pietrangelo toe dragged the Bruin defense out of position and Vladimir Tarasanko finished off the play with his 11th goal of the postseason with 4:30 left in the opening frame.

After a dominant opener, St. Louis locked in for another round of control in the second. Instead, Rask kept his team afloat and the special teams struck again. After a banger 3:06 long shift, Connor Clifton took an illegal check to the head minor and St. Louis hit the power play. The Bruins kill unit answered just 26 seconds into the infraction. Brad Marchand broke the puck up the ice and dropped a pass for Patrice Bergeron who fired the puck on Binnington. The Blues’ rookie goaltender allowed a poor rebound and Brandon Carlo tracked the loose puck for his first career NHL Playoff goal and a tie game with 5:42 left.

Not all was well with the Bruins, however. Captain Zdeno Chara blocked Brayden Schenn shot up into his beard and tumbled to the ice. The giant bled from under his bearded cheek and left spots at the left faceoff circle. Boston’s Captain skated off to get stitches but did not return to game action. He sat on the bench in the third period with a bubble shield on and supported his teammates from the side, a reminder of Father Time’s perfect record and tightening grip on the NHL’s tallest player.

As in the first two periods, St. Louis controlled the pace of play in the third. For much of it, Rask prevented a goal while the offense sputtered. The Blues outshot the Bruins 13-4 in the finale and did not allow Boston any time or space in the neutral zone. Without their captain and an important defenseman (just like in Game Two), Boston’s loose grip on a tie finally gave way. Ryan O’Reilly gave St. Louis the lead with 9:22 remaining after his first multi-goal game of the 2019 postseason and his playoff career. Boston pulled Rask for an extra attacker in the dying minutes but came up empty. Brayden Schenn deposited the puck for the empty netter, a 4-2 final, and the first home Stanley Cup Final win in eight tries under the Gateway Arch. Laura Branigan’s “Gloria” sounded through a raucous Enterprise Center.

Bruins Head Coach Bruce Cassidy expressed concern about his ailing captain. “He had some stitches, probably some dental work in the near future. I can’t say whether he’d play in Game Five.” Cassidy added that if Chara is out, Steven Kampfer would likely replace him. “He’s been playing. But he is another left-handed stick, so we’d have to weigh that.”

As far as defensive performance all around, Cassidy was not afraid to offer criticism on his whole team. “We’ve talked a lot about our defense. Personally, I think our forwards gotta do a way better job with our d out. The onus has to go on them. They’ve got to pull their weight in terms of puck support, helping out the D, finishing out some plays.”

The Boston power play that went 4-4 on four shots on Saturday was held silent on two man-up opportunities.

Jordan Binnington stopped 21 of 23 shots faced in a bounce-back game after surrendering five goals on 19 shots on Saturday.

Colton Parayko stayed focused after the game. “We played our game like we did in Game Two. Our team’s not an east-west team. If we play like that, we turn pucks over, give them transitions. I think we did a good job of playing north-south hockey. We’re a big, heavy team. Our fans have been with us through the highs and lows with us all year and it’s nice to give them tonight. But its a long series. It’s nice to tie it going back to Boston.”

Head Coach Craig Berube added to the commentary of his team’s focus. “Our team responds pretty well. They have all postseason. What we did better tonight: we stayed out of the penalty box and we had a lot of O-Zone time.”