One Year Ago: Taylor Hall Traded to Arizona

It was one year ago today that Taylor Hall, the first Devil in the franchise’s history to capture a Hart Trophy as league MVP, was dealt from yet-again struggling New Jersey to the surprisingly-in contention Coyotes.

For the Devils, it was just the second of the disassembly of the three most praised parts of the 2017-18 squad that scratched and clawed their way to the postseason for the first time since 2012. But, head coach, John Hynes couldn’t survive the club’s 9-13-4 start and was fired on Dec. 3–13 days later, the team dealt Hall. Ray Shero, the successor to Lou Lamoriello’s 27-year tenure as GM, was let go a month later as part of a tumultuous 19-20 campaign that saw the team finish with 68 points and without an invitation to the league’s return to play.

Arizona, an unlikely chaser of goods, was serious about trying to contend. They added Phil Kessel in the offseason, had strong options in net with Darcy Kuemper and Antti Raanta splitting and Rick Tocchet was in his third season behind the bench. The franchise also had a major boost to its profile with billionaire, Alex Meruelo taking on majority ownership. Tied for sixth in the NHL at the time of the blockbuster trade, the time was apparently now for the ‘Yotes.

Hall and Blake Speers from the Devils to the Desert; Nick Merkley, Kevin Bahl and Nate Schnarr to go along with a first round pick and a conditional pick were sent as compensation for the former MVP. Others speculated to be in pursuit of the winger included the Panthers, Avalanche and Blues. Winnipeg may also have been keeping tabs on the situation–at least twice prior to the deal, they had a considerable scouting presence on hand at the Prudential Center.

Hall made his debut with Arizona on Dec. 17, tallying the primary assist on Oliver Ekman-Larsson’s game-winner 17:23 into the third period in San Jose. He and Phil Kessel would link up 16:14 into his debut at his new home two days later. By his third contest he found the net, his 5:41 score in the third made it 4-0 Arizona en route to a 5-2 victory over the Red Wings–one of just two teams that recorded less points than his prior team during the 19-20 season.

Arizona struggled in the 2020 side of the season, winning 10 of 25 in January and February and prior to the league pause due to COVID-19, had accumulated 32 points and had dropped considerably in the Western Conference standings. Their 74 points were second-worst among the teams invited to return-to-play in Edmonton in August. 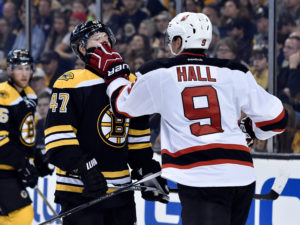 The ‘Yotes managed to expunge Nashville in four games in their best-of-five qualifier before dropping in five games to the Avalanche in the first round of the postseason. Hall recorded a goal in each series but essentially finished his second playoff appearance with the same number of games as 2018, when the Lightning made quick work of the Devils.

By now you know what has happened since. New Jersey received Arizona’s first rounder for the October draft and selected Canadian WJC-bound center, Dawson Mercer. Merkley and Bahl should challenge for spots on the NHL roster–though Bahl, coming directly from junior hockey, could use some minor league seasoning. Schnarr is likely AHL-bound (whatever that might end up meaning this season) so we’ll reserve judgement there.

Hall, meanwhile, inked a one-year deal with Buffalo in the offseason, much to the surprise of many. That signing though signals the final piece of compensation–a 2021 third round draft selection. That price probably didn’t seem too big of a risk before the Coyotes were fined a 2020 second and 2021 first for illegal combine testing.

So one year later, let’s review a few of the winners and losers from the deal and just maybe a few that might remember this date from a year ago as what could have been.

Hall’s time in Arizona wasn’t great. He still struggled to score with 10 goals in 35 games and he couldn’t add much firepower versus the Avalanche, who enjoyed a +14 goal differential in a five-game series. But, a ten-year NHL veteran, Hall was in danger of yet another season without meaningful hockey games. So despite the short-lived success, there was a taste of it for the winger. It’s not a giant victory, but it’s something.

After making quick work of the Coyotes, the Avalanche faced a difficult opponent in division-rival Dallas–a bit of a fun throwback to the late 1990’s/early 2000’s. After going down 3-1 in the series, the Avs managed to force a seventh game before bowing out in OT to the eventual Western Conference champions. Colorado and the Devils scouted each other prior to the Hall trade and whether the sticking point of the deal was a prospect like Martin Kaut or an additional pick, the deal never came about. It was a game 7 hat trick from a virtually unknown Finnish Star, Joel Kiviranta that ended their season. You have to wonder if Hall could have used his game-breaking speed with an already fast club to help flip the script.

Given the respective rosters for the Devils and Coyotes next season, it’s very possible that Merkley and Bahl could compete for NHL spots on both teams. But if you have to ponder the long-term outlook for both franchises, it’s a decidedly favorable one for New Jersey. With Nico Hischier, Jack Hughes and Mackenzie Blackwood as part of the team’s young core and just coming off a draft in which they selected three first round prospects, they appear to be working toward competing within the next three years. Arizona still has Clayton Keller and Barrett Hayton and should see Victor Soderstrom within the next season or two, but with the loss of several picks including the forfeiture of two and renouncing one this past draft, you have to wonder how long the turn-around could take and if the ‘Yotes end up spinning their wheels once again. For Merkley and Bahl, they could be arriving to the show just as the Devils burst on the scene as a competitive team.

Losers: The Devils and Coyotes

Simply put, the Coyotes failed to advance past the first round in the postseason and might not have even qualified had it not been for the league’s unique return-to-play format. Unfortunately, they couldn’t even cash in on playoff revenue and despite having arguably the most positive economical outlook since relocating from Winnipeg, they couldn’t lock in Hall on a long-term extension. The Devils meanwhile, reaped the rewards of a deal that has been overwhelmingly decided in their favor–the 2016 acquisition of Hall for defenseman, Adam Larsson. Hall scored 208 points in 211 games as a Devil while earning a league MVP title. But they couldn’t maintain the mandate for success and that kept Hall from re-upping and ultimately forced the hand of Shero just prior to his own tenure in NJ being cooked. Hall still has to rebound after a difficult season, but it seems fair to say that if you had a chance at extending his services and could not, you can’t say you’re much better.