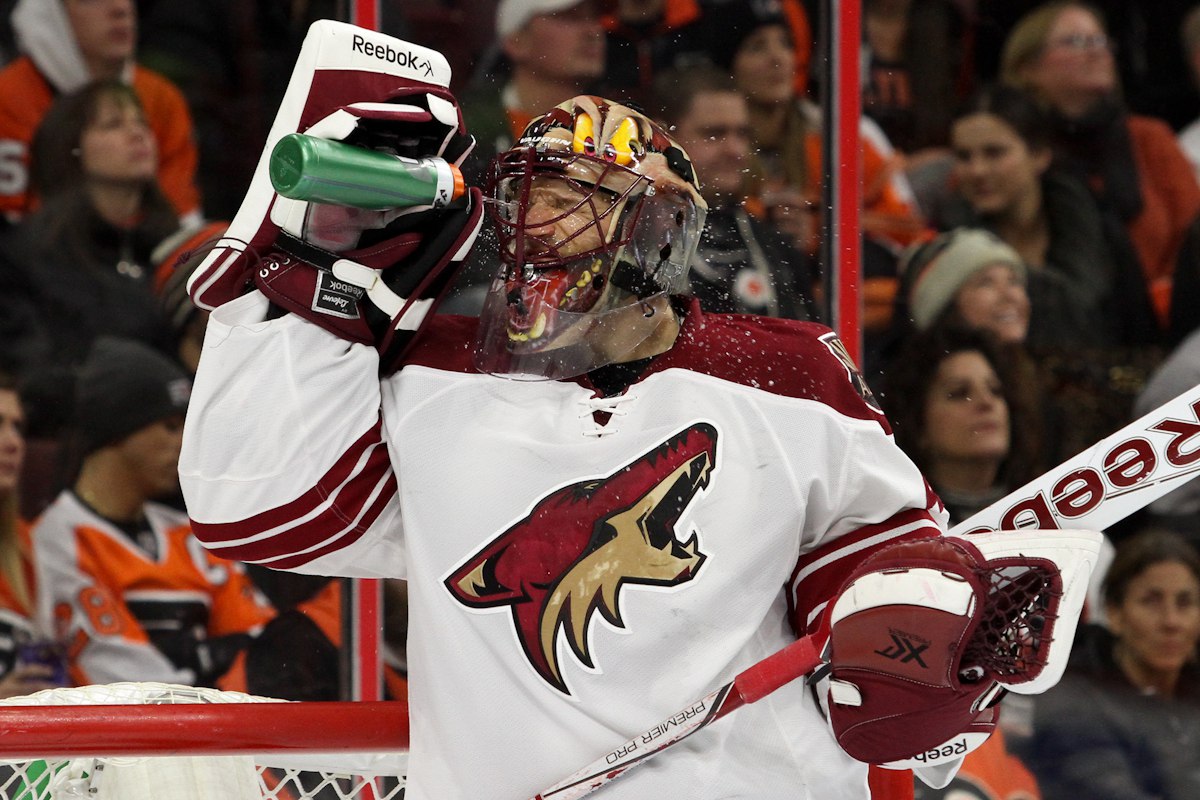 One Goal Wins It

Andy Andreoff scored the only goal of the game Monday night as LA beat the Coyotes. It was his first NHL goal. And you could see that on the bench after it, he was replaying the moment. Why not? It’s been a while in coming. And even he knows it. The single word he used to describe how he feels, having achieved this milestone?

Andreoff was drafted in the third round in 2011, by LA, 80th overall. He has played fifteen games in the NHL, all this year, but his appearances have been spotty. He began the season playing eight games in a row, then did not dress for weeks. He was sent to AHL Manchester for a stretch of seven games, and he proved himself once more, getting five goals to go with five assists.

What’s weird about his record in Manchester is that the year prior, he was on a much less aggressive tear, with 11-24-35 points over the course of 76 games. But in addition to that, he found himself mixing it up quite a bit, getting 133 penalty minutes.

His Junior career was spent in Oshawa, not far from his native Pickering, and there, over the course of five seasons, he played around 60 games a year after the first year. And he generally averaged a point a game. His best year was his second-to-last, when he was in 66 game and got 75 points (33 of them goals). But he also notched 109 penalty minutes. Again, fighting his way to the top.

Funny thing about that is that he doesn’t look like a fighter. He’s 6’1” and 207, but he doesn’t seem mean, and he’s got the perfect features and full set of teeth of a guy who hasn’t been through a ton of hockey wars.

No wonder it seemed to him like it was a long time in coming. “It’s already March, so it’s nice to get it out of the way,” he said.

So what happens to a guy who scores his first goal? He’s mobbed by the media first. When that happened on Monday evening, Andreoff’s comments included the following description of the moments after the goal: “I couldn’t hear anything. I kind of blacked out. I just shot.” He added, “It’s a dream come true for anyone to get their first NHL goal. I’ve worked pretty hard to get there, so I’m glad I got it.”

The play happened in period two, and it would be the only goal for either team on the night. Andreoff saw it like this: “Nolan was down in the corner there, and . . . he gave it to me for a backdoor tap-in.” It was actually a shot that went under the goalie’s pad as he stretched out across in the splits. Mike Smith, the goaltender in question, seemed a bit disappointed after the goal. Andreoff did not seem to get the whole puck. But does that matter now?

And after that, he asks the trainer, in this case Dana Bryson, where the puck he scored with was. Dana returns in a moment with it, taped and marked already. Andreoff holds it up for pictures. He then tosses it on the bench where he dresses. Bryson asks him what he wants to do with it. “Do you want to keep it?”

Andreoff isn’t sure what to answer. Bryson tells him that he’ll take it and that they’ll have it framed for him. Andreoff nods, and that transaction is done.

Later, when asked what he would do with the framed puck, he said, “Put it in my basement, I guess. Where I have my jerseys.”

He was also given a DVD by the video guy, who assured him, “It’s on there,” and then was pulled aside by one of the Kings’ offensive tutors, former player Nelson Emerson, for a private moment of advice.

He later walked through the dressing room with two pieces of paper in his hand. The official stat sheets. In fact, one of the press minders said to him, “Yes, those are the official sheets.” The logical guess? That these will go home with Andreoff for perpetuity.

The sheet on his night, by the way, shows two shots, a missed shot, and three hits. He also won five of six faceoffs, and he was on the ice for 10:39. His icetime previously has been much lower. He typically gets about eight or nine minutes. ON Saturday, it was 8:28.

Andreoff is 23. He’ll turn 24 in the third round of the playoffs, whether the Kings are there or not. When he does, if he’s at home, they’ll likely reference the goal. Perhaps by then he’ll have more. Sometimes things happen that way.