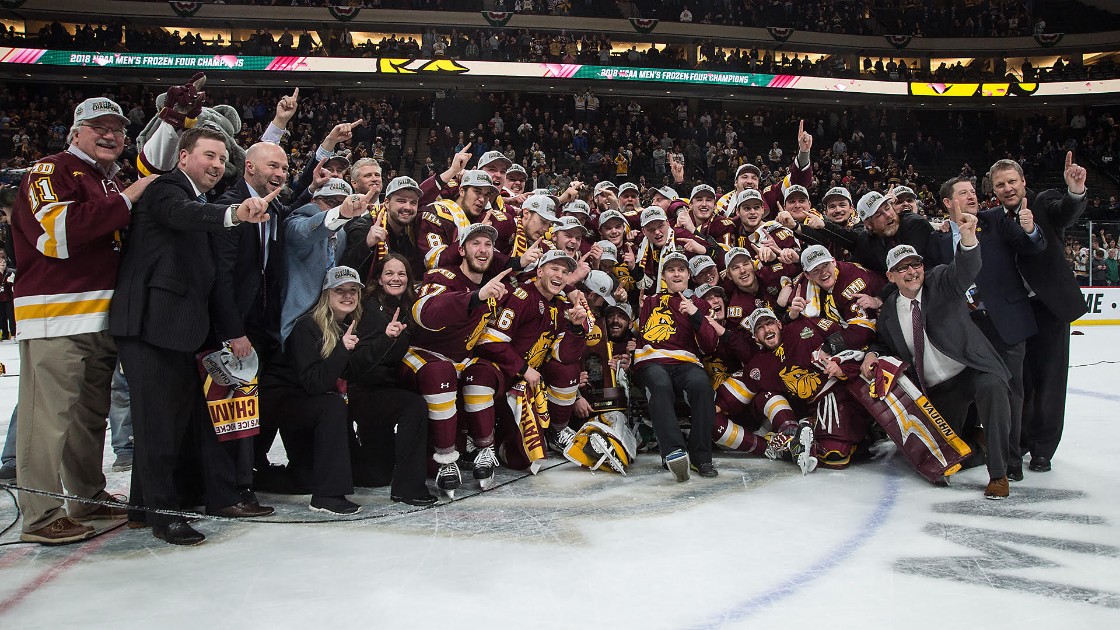 The first month of the new college hockey season is complete. The results have been curious. Some teams have met expectations, some have surprised, and others have disappointed wildly. Let’s take a look at how the stories have sorted themselves out through October.

Minnesota-Duluth ended their 2018 season with a surprising National Championship. They began the new year with high hopes. Most of the championship team, including the goaltender and entire blue line. So far, Duluth has maintained their place atop the college hockey landscape. The Bulldogs are 6-1-1 with their only stumble coming against the Golden Gophers on opening weekend. Otherwise, Scott Sandelin’s squad has impressive. The statement victories are over Michigan Tech and on the road against Notre Dame. They will be a likely top seed in the NCAA Tournament if they maintain the pace.

Just behind them, St. Cloud State and Denver sit in the second and eight places in the most recent national polls. Both have seen recent success in their conference and have been regulars in the NCAA Tournament. The only misstep for either was a St. Cloud loss to Northeastern and a Denver tie to Alaska. Otherwise, the regular balance of power in the NCHC remains.

While the western college hockey powers have mostly maintained their spots, the two most decorated eastern forces have dropped. Boston University and Boston College sit at the bottom of Hockey East at the turn of November. BU went 0-4 with embarrassing conference losses to Merrimack (4-0) and Providence (5-0). The reigning Hockey East champions have started cold and Albie O’Connell is still looking for his first victory as BU’s head coach. While BC hasn’t played a conference game yet, their start is probably more concerning than the Terriers. The Eagles have been shutout three times in four games and surrendered seven goals twice. Their last time out was a shockingly awful game against St. Cloud State in which they looked completely lost. BC lost 7-0 and inspired a mix of disinterest and terror at the potentially long season ahead. Neither is off to a good start in a year with remarkably high expectations. Both got a win as the calendar turned to November’s first month, but both still have holes to climb out of in the standings.

Changing of the Hockey East Guard

While the Boston named schools struggle, Hockey East continues to undergo significant changes. Providence has maintained their recent form with the nation’s third-ranking, so nothing surprising from the Ocean State. Northeastern has impressed with a largely changed cast and promises to rain pucks on opponents without last year’s top line of Adam Gaudette, Dylan Sikura, and Nolan Stevens. Grant Jozefek and Zach Solow appear ready to take the reins and live up to their scoring potential from their Junior days.

While those schools are continuing past strong performances, UMass has entered the contender class. Cale Makar and Mario Ferraro have reinforced their spots as two of the sport’s best defensemen. Makar, in particular, was his conference’s best player in the opening month and is an early Hobey Baker Award candidate. Greg Carvel’s team has met expectations through the first month and is leading a changing Hockey East conference. UConn and Maine have shown flashes of skill and talent while the Vermont Catamounts upset Michigan to open the season. New England’s conference is changing and offers strong stories to pay attention to.

The Big 10 is filling out much of the NCAA’s top rankings with expected powers Notre Dame, Ohio State, and Penn State. The surprises show in the Mitten State. Quinn Hughes and the Michigan Wolverines were upset in their opener by Vermont and lost to Western Michigan. They’ve stumbled and struggled to keep the puck out of their net. Hayden Lavigne performed well in last year’s NCAA Tournament but has stumbled in the first month of the new season.

Meanwhile, their in-state rivals have reversed their recent course. Michigan State has missed the NCAA Tournament and finished under .500 every year since 2012 and was expected to finish in the Big 10’s cellar this year. Instead, Danton Cole has his team at 5-2 through the opening weekends. Taro Hirose is a leading scorer and Mitchell Lewandowski is at the head of a strong supporting cast. Time remains for the Wolverines to pass the Spartans, but after a sweep of Cornell last weekend and a good weekend split with Ferris State, Sparty is a worthy and respectable opponent after years in the Big 10’s basement.

Every year, a few schools offer a compelling rise to the top. This year, there are two particularly intriguing stories. One is one of it’s older champions, the other is college hockey’s newest team. First, Bowling Green. The Falcons won their only National Championship in 1984 behind Jerry York and Gary Kruzich. They were a perennial force in the CCHA and featured two of the first 15 Hobey Baker Award winners in George McPhee and Brian Holzinger. Sadly, the program fell into disarray and disrepair in the 2000’s, nearly folding completely after the disastrous 2008 and 2009 seasons. The 2010’s started as poorly as the prior decade, with only five victories.

However, the program returned to respectability as the CCHA was swallowed by conference realignment. The Falcons moved to the restructured WCHA and have earned respect. They’ve won 20 or more games each of the last four seasons and were narrowly edged by Michigan Tech in the 2017 WCHA Championship Game. They made the WCHA Finals last year and fell to Northern Michigan in another competitive season and have taken a strong step to start the new year. Alec Rauhauser was the program’s first All-American in 12 seasons and returned for another year. While he has been strong to start, he now has considerable help.

Sophomores Max Johnson and Brandon Kruse are tied for second in the nation’s scoring race. Kruse is tied for the national lead in assists. Their offensive punch has posted Bowling Green to the second highest scoring offense in the country and a spot in the rankings. In addition, they’re sporting the fourth-best scoring defense, only allowing 1.67 goals per game. The Falcons deserve the spot in the national rankings and might earn an at-large bid to the NCAA Tournament if they play this well all year.

Meanwhile, the nation’s youngest program is benefitting from one of the nation’s top goal scorer. Arizona State joined the Division I ranks in 2016 and is now playing a full DI schedule after a hybrid of Club, DIII, and DI schools. Johnny Walker has started his career well with a nation-leading 11 goals in 10 games and 17 total points, four points more than the second-placed scorers. Joey Daccord, an Ottawa Senators draft pick, has also been strong for the Sun Devils and provided a strong presence in the net with a .934 save percentage. Walker provided heroics in Happy Valley, scoring the game-winner in overtime over the Nittany Lions on Saturday night to push their record to 7-3. Greg Powers has a team without a conference, but with plenty of talent and hope for a strong season.