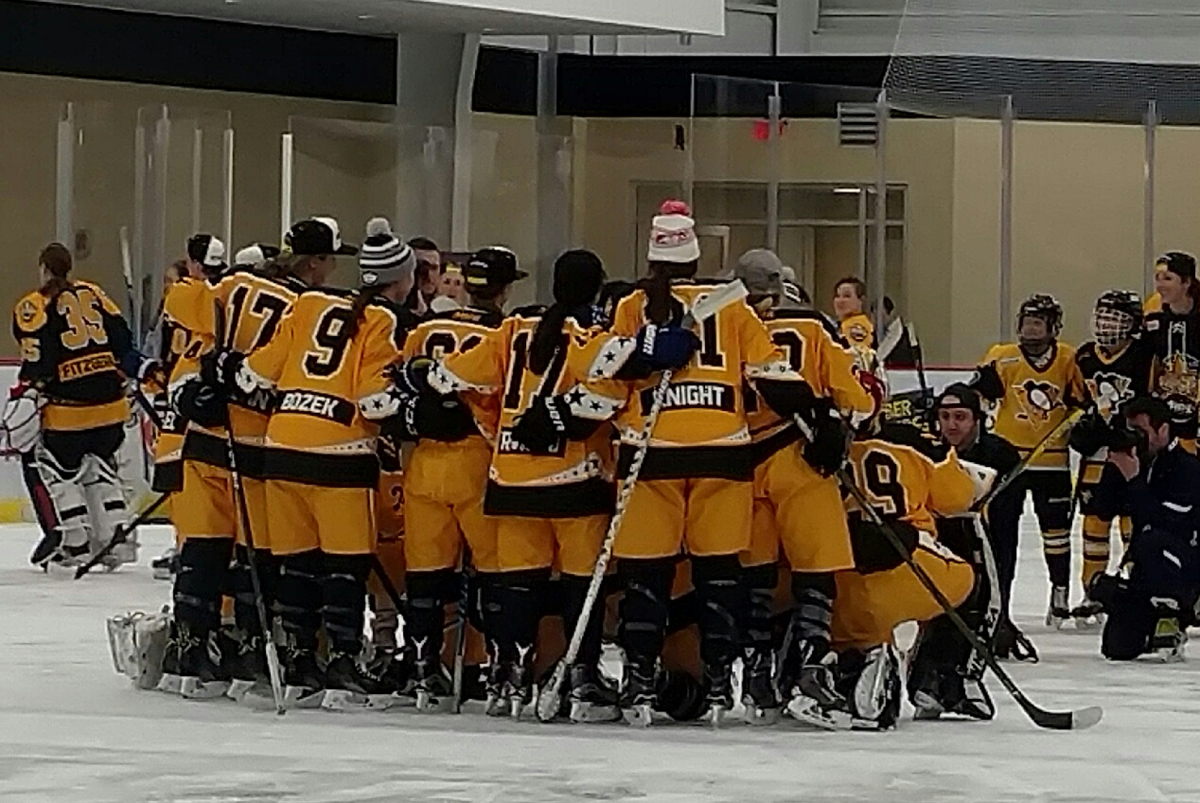 In the National Hockey League, February is Hockey Is for Everyone month. Its purpose is to foster safe, positive and inclusive environments at all levels of the game, from youth organizations to the pros.

A few of the National Women’s Hockey League All-Stars, asked what the month meant to them, weren’t even aware of it. But they’re busy living the meaning of Hockey Is for Everyone every day, serving as role models for inclusion and achieving the dream of doing what you love.

“That’s awesome, because hockey is for everyone,” said Blake Bolden, 25. She plays defense for the Boston Pride, is the NWHL’s first African-American player, and has an 87 MPH slapshot that won the hardest shot competition at Saturday’s All-Star Skills Showdown. “It’s for me, it’s for little boys and girls and, especially because I’m African-American, I feel very strongly about that.”

‘They are our future’

The little boys and girls turned out in force for the 2017 NWHL All-Star Weekend in Pittsburgh. So did their families and fans of the game from all over who descended upon the UPMC Lemieux Sports Complex, in the northern suburb of Cranberry, to see some of the best women’s players in the world.

And, just maybe, to dream of becoming one of them.

The weekend started with a sold-out NWHL All-Star Girls Hockey Clinic, where the All-Stars coached some of the young players who represent the future of the women’s game. Youth hockey, including girls’ hockey, is thriving in the region, and some local girls got the chance to show off their skills in an intermission game during Sunday’s All-Star Game. All fans also had the chance to meet the players at post-event autograph sessions.

“I think they’ve been kind of the biggest component of this whole weekend; the most attention we’ve gotten has been from the kids,” said Kelley Steadman, 26, a forward for the Buffalo Beauts. As director of hockey operations for the Robert Morris University women’s team, she helps lead a Big Sister Little Sister program that brings girls from the Pittsburgh Penguins Elite program to RMU games so they can see what college hockey is all about.

“There’s just such a following here, with the Pens Elite being such a great program, and all the other youth programs around this area,” Steadman said. “I think they get excited when they can share that with us living here in Pittsburgh, and when we can bring these really talented players here.”

Bolden coaches a girls’ hockey team at Milton Academy outside of Boston. “They think I’m a superstar,” she said. “I’m not a superstar in my mind, but it’s just special. You want to be that role model for those girls, and they are our future. I’m excited for them to grow up and take our place.”

In a league full of role models, Harrison Browne stands out. In October, at age 23, the Beauts center came out as the first openly transgender pro athlete in North America who is still competing. He inspired the NWHL to formalize a policy on transgender athlete participation and has its full support. He also has the support of fans, who voted him in as an All-Star and saw him net two goals in Sunday’s contest.

“It’s been a big month for me,” Browne said. “I got to go to the Buffalo Sabres’ You Can Play night and it was amazing to see all the support, all the people cheering in the crowd. I think the women’s game has done a really good job on the LGBT spectrum. I think the men’s game is also making its own waves, and it’s great to see. They have a lot of influence.”

Perhaps the women’s game is also having an influence on the men’s, as the NHL trends toward the kind of faster, skilled game that’s been successful for teams like the Pittsburgh Penguins.

“That’s definitely the way women’s hockey has been the whole time, so it is aligning,” Browne said. “And I think that’s why more people want to watch it. They watch the men’s game, then they watch the women’s game and see it actually is really good.”

The women’s game doesn’t feature the same kind of hitting as the men’s, but don’t mistake that for a lack of intensity. Sunday’s NWHL All-Star Game featured two, 25-minute periods of four-on-four hockey – enough to test the stamina of any hockey player, regardless of gender – and loads of skill, goals and saves in an 11-10 final.

“It’s obviously really fast; you’re out there against some of the best in the world,” Steadman said. “I think toward the end, we were all sweating a lot. A little fatigue, but you don’t really notice it when you’re out there.”

With its Founding Four teams in Boston, Buffalo, Hartford and New York, the NWHL’s choice of Pittsburgh for All-Star Weekend provided an opportunity to expand its reach to an audience of hockey fans and players that might be seeing the women’s game live for the first time.

It was a resounding success, with a packed house of more than 1,500 for the Skills Showdown and All-Star Game. The raucous crowd greeted each player introduction with a standing ovation, particularly team captains Steadman and Amanda Kessel, 25, a forward for the New York Riveters who scored a hat trick Sunday to give her team the win. Kessel’s name is well-known in the region for both her own extensive accomplishments and hockey fans’ fondness for her brother, Phil, of the Stanley Cup-winning team that plays down I-279.

Beauts goaltender Brianne McLaughlin, 29, did plenty of talking up about the region to her fellow All-Stars. She played at RMU; hails from nearby Elyria, Ohio; and owns and operates a goalie training facility in suburban Pittsburgh.

“She was just excited and telling us how excited she was for us to come,” said Gigi Marvin, 29, a forward for the Boston Pride who won Saturday’s breakaway challenge by a fan vote. “Any time you can generate positive momentum, it’s a good thing. You see that a lot even in my neck of the woods. I’m from six miles south of the Canadian border [in Warroad, Minnesota]; there’s nothing in sight. We don’t have a movie theater, we don’t have a shopping mall, but we have rinks. We’re passionate about hockey.

“Just being a sports fan, I know that Pittsburgh has a thriving youth base also. Whether the Penguins were here or not, I would still consider this an awesome area to come and play. That’s something I’m sure the commissioner [Dani Rylan] considers as far as where to go next and continue building the fan base.”

The NWHL has faced challenges in its second season, cutting players’ salaries to remain financially viable and shortening the original schedule to finish ahead of the IIHF Women’s World Championship in March. But its long-term plan includes the possibility of expansion and, with the support of the Penguins and the fans that made the 2017 All-Star Weekend a hit, Pittsburgh is likely on the league’s short list.

“It’s not a [NWHL] home market, but there are still people who want to watch the game,” Browne said. “I think it shows good promise for women’s hockey.”

It also shows good promise for the little girls in the stands, wearing NWHL team jerseys and T-shirts proclaiming themselves future members of their favorite club.

“It’s out of this world to think that I was one of those little girls screaming during the NHL All-Star Game and during NHL games, and to think that those girls see us out on the ice and they want to become one of us,” said Rebecca Russo, 22, a first-year forward for the New York Riveters who claimed the title of fastest skater. “They’re actually cheering for me and I’m a pro athlete. It’s still weird for me to say – really awesome and humbling.”

“I take a lot of pride in that,” Kessel said. “I try to do everything I can to keep the game going so that, when they’re older, they have a chance to do this, too.”