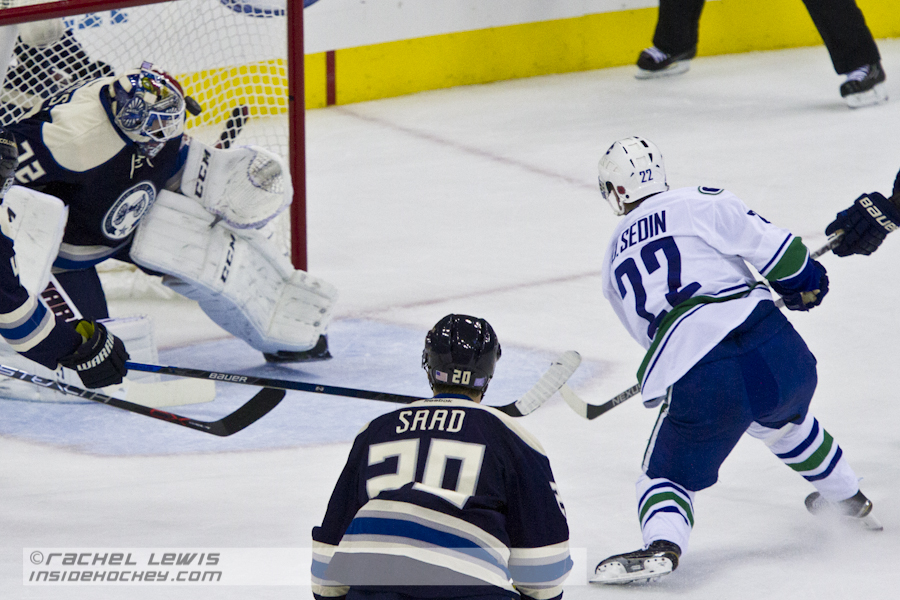 ‘Nucks Are Scoring Goals – Just Not on PP or in OT

The Sedins almost looked like the prolific goal scorers they were in 2010 and 2011 on Tuesday night when they notched seven points between the both of them in a 5-3 win over the Columbus Blue Jackets. While their current points totals don’t quite match up to the numbers of today’s top scorers (such as Patrick Kane, Tyler Seguin and Jamie Benn), the Sedins, along with their teammates, have been successfully scoring goals.

Players from all lines and of all ages are contributing to the scoreboard. Of the 22 skaters who have played more than one game with the Canucks, only four of them have not scored a goal yet, and all 22 of these players have at least 1 point. Even goaltender Ryan Miller has an assist.

Goals have been coming regularly from rookies and veterans alike. 19-year old Jared McCann and 35-year old Henrik and Daniel Sedin are tied for first place on the Canucks for goals with five each. Daniel leads all forwards in points with his five goals and 10 assists and 22-year old rookie defender Ben Hutton leads all defencemen in points with eight assists.

Overall the Canucks have been scoring 2.94 goals a game, which is good enough for to be ranked seventh overall in the NHL. The goals they have scored have helped them manage some comebacks as well. Even though they ended up losing, the Canucks managed to come back from 2-0 against Buffalo and 3-1 against New Jersey to tie those games before the final minutes.

Canucks from all four lines are scoring goals, but that is at even strength. For some reason, the Canucks cannot find the back of the net during power plays or during overtime. Several of the games the Canucks have lost were either full of power play chances and/or went to overtime, and could easily have gone the other way had the Canucks been able to score with the man-advantage or during extra time.

Their power play is ranked 25th in the NHL with a 13.7% success rate, and the Canucks have scored seven power play goals through 51 chances. They have especially struggled in the past four games, failing to score a power play goal through 15 chances and allowing three shorthanded goals.

“Our PK has been so good all year,” head coach Willie Desjardins told The Vancouver Sun after their game against Columbus. “I am not as worried about our PK, but our power play wasn’t good. We were out of synch. You will hardly ever win when you give up two on the power play and a shorthanded one like that.”

While the Canucks have often been able to gain possession on the power play and pass the puck around in the offensive zone, they have been unable to get the puck in the net.

“We had our chances on the power play and didn’t score and that was the difference,” Desjardins told The Province after their loss to New Jersey in which they had six power plays, one of which was five minutes long. “We need more and it’s not one unit, it’s both. We have to generate more because it’s such a big opportunity at that point in the game.”

The Canucks’ seven power play goals have each come from a different player, but overall the Canucks are struggling to find a combination of players that work together successfully as a power play unit. They have tried having three forwards and two defenders on the ice and have tried having four forwards and one defender on the ice. They have slotted different players in and out of the power play units to try to formulate something, but so far have not found the magic combination.

“We’re not even getting momentum off the power play, not shots or anything,” forward Brandon Sutter told The Province. “We’ve been working on it but we have to get back to some basics and get some pucks on net.”

The Canucks cannot seem to master the new 3-on-3 overtime format either. So far they have had six games go to extra time. One game went to a shootout, which the Canucks won, but the other five all ended in overtime losses for the Canucks. Goals against the Canucks in overtime have often been as a result of sloppy passes and odd man rushes.

Nevertheless, all of the games the Canucks have lost this season have been fairly close, with each being decided by only one goal.

“It is probably a better thing to lose by one goal than four or five and you are not even close,” Alex Burrows told The Vancouver Sun. “I think we are in the mix, we are right there against any team and that’s a good sign. But we have to find ways to be on the good side of it.”

All of the Canucks are contributing to the scoreboard and they are scoring a decent amount of goals, but for the Canucks to accumulate more wins, finding success on the power play and in overtime will be important keys to success.