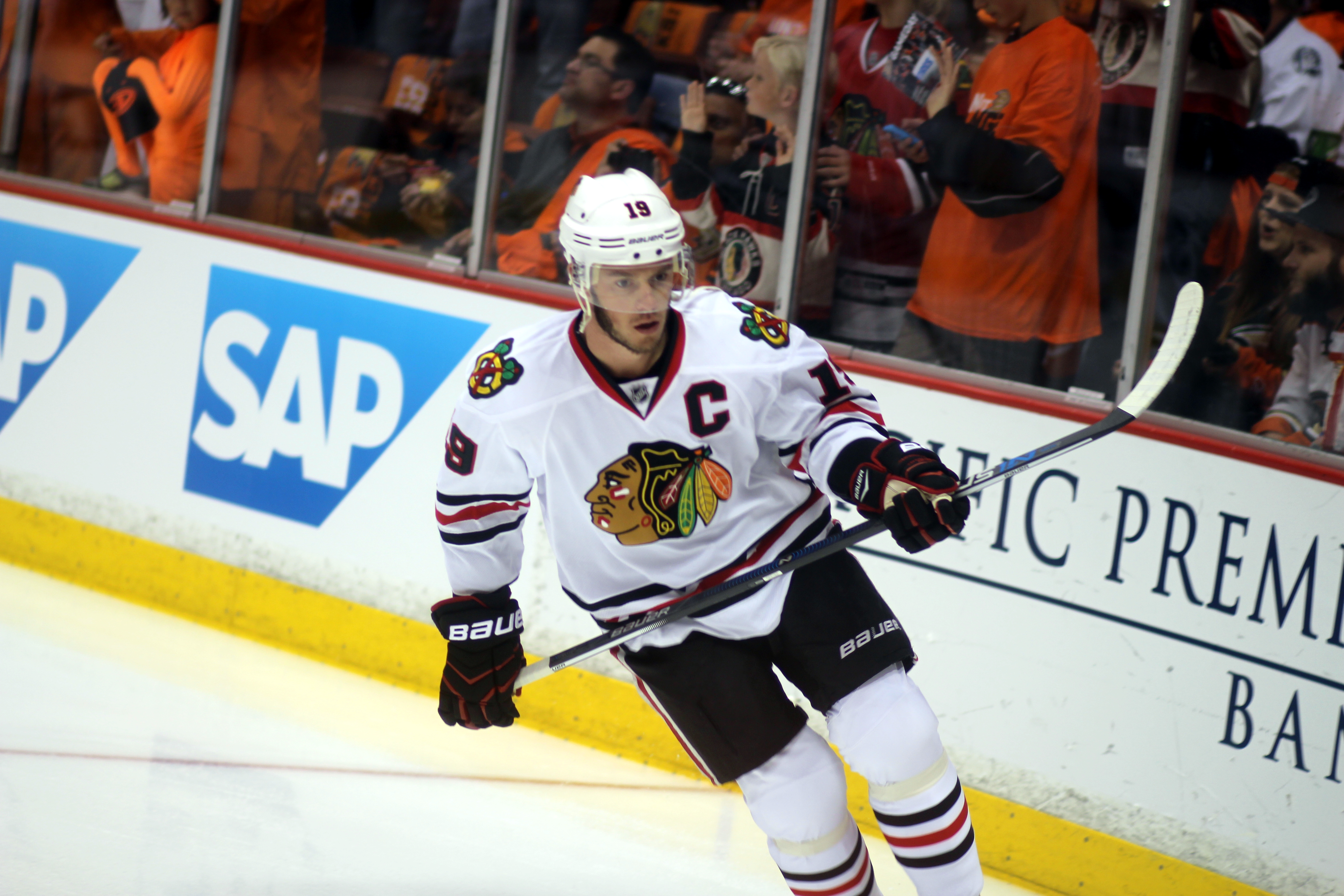 Not For the Faint of Heart

The home team also got major production from their lineup in period one. Two goals were scored in 32 seconds, one by Fowler and one by Kesler. They added a third ten minutes later, by Vatanen.

And that one change meant more than just dropping a guy from a line and inserting another. Because of the switch, every line after the first was different than two days ago in Chicago. Here’s the breakdown on that: Line one continued as Getzlaf with Perry and Maroon. Line two, the Kesler line, dropped Beleskey and gained the add-in, Fleischmann. Beleskey went to line three, which was then he with Rakell and Palmieri. They dropped Cogliano, who found himself with Thompson and Sekac on what was the fourth line, which had had Etem on it.

And if you match up those lines to those goals, here’s what you see: the new fourth line got the first goal. The new second line got the second goal. And the third one was scored with the first line on the ice, but it wasn’t a result of coordinated line play. Rather, it was a faceoff win right back to the point, where Vatanen wristed the puck to the net and in, high. The only line not scoring was that of Rakell, Palmieri, and Beleskey. The latter had some magic in store for later, though.

The Vatanen goal was a bad one. Crawford admitted it with a double shrug of his arms, and on the bench, backup Scott Darling was seen—by me—flexing his neck back and forth as if it might just be time to limber up and come in.

The Chicago coach called his timeout after goal number two, at 5:42, but he was not, apparently, tempted to pull his netminder, and good thing, because period two was altogether different.

It began with a shot total for Chicago of 3 and Anaheim 11. It ended with the numbers exactly even at 16s, and Andersen having let in a bad goal of his own.

Teravainen had grabbed a puck at center and skated into the Anaheim zone, let go with a shot, and Andersen had let it hit and roll over his arm and into the net. He shrugged it off, and in truth, it didn’t seem to matter at this moment, but it would.

The Hawks got a second one exactly when you’re not supposed to let a team score, in the final minute of the period.

But that hardly tells you what happened, does it. Here’s some detail: The Chicago goal late came when the puck was behind the net with Lindholm back there. Somehow, Seabrooke was left alone for a quick one-timer to score.

And on the Anaheim side, there was a hard hit on Hjalmarsson that turned the puck over to Silfverberg, who shot it over the net. Then the Hawks had one that Andersen had to make a blocker save on. That was a pass from Toews to Saad. So the action was fierce and each goalie was overcoming one bad one. So far.

In period three, the Ducks’ lines were suddenly, mysteriously, back to what they had been in the prior game. When asked why, Coach Boudreau said after the game, “I just thought, well, I had a thought that I shouldn’t tell you why I did what I did,” but then he added that it had nothing to do with how anyone was playing, but he wouldn’t get more specific than that.

He must have been pretty happy with himself when he saw his big line dominate on a shift when Getzlaf dug a puck off the boards and whip it across the blueline to Vatanen, who spied Maroon moving diagonally down the slot and passed it onto his tape. He redirected it into the open side with Crawford having no chance whatsoever.

And on press row, people were happily pecking away, the story told, except for what was to be the obvious pressure by the Blackhawks as they tried to chip away at the end.

Then everything changed, thanks to a guy named Toews. With less than two minutes to go, he one-timed a slapshot off a pass that came from Hossa in the Ducks’ corner. The puck hit iron—the crossbar, I think—and then twine. Or polyester, or whatever they make nets of nowadays. Brandon Saad was in front for the screen. And it was 4-3. No problem, right?

Well, Crawford was out again at 1:24, with an icing faceoff on the Anaheim zone. The Ducks called their timeout. And the play went on, down to a minute to go, fifty seconds, forty. No, wait. Before then, with 48 seconds left, Toews was on the goalline in the left corner again, and the puck, too. So what would the smart player do? Whip a shot along the red goal line to the net. And bounce it off Andersen and in.

The goalie after the game said, “It hit me on the leg.” It was two bad goals on the night.

But neither did Boudreau blame his netminder. In fact, after the game, he waxed on for a while about the job he’s been doing and how it was OK that he hadn’t had a sterling night. “Oh you know what? He’s played so many good games in a row, and he’s been out there so often, that those couple of goals against today, and he’ll be the first to tell you he should have had them, but it was good that we bailed him out. He’ll be back to his great self in two days. It was good that if he had a bad game, we were able to help him out a little bit.”

Why he do that? Because the Ducks came out and won the game with a roaring 45 seconds of OT. During that period, they twice went down and had good chances. On the first, Cogliano dropped the puck to Thompson, who took a shot which Crawford got off his leg. Cogliano got the rebound and Crawford made a great leg save.

They did the same thing again a few seconds later, Kesler bearing down on the net and taking a shot, the puck flying out to Beleskey, him burying it and then flipping over Crawford, onto his back, and into the corner.

There was such a crush of players on top of him so fast that it was hard to pick up his number to confirm that he was the scorer.

Boudreau had motivated his guys in the locker room before they came out for the OT. “I said don’t be upset and hang your head, get angry. Get really mad that we sort of pissed it away a little bit. Just come back and play the way we did in the first period, and things will work out.”

Kesler was also on message, saying in the locker room, “Toews is a good player, a skilled player, makes plays. We got running around a bit too much, and we let him away a little bit.” Then he got to the intermission between period three and OT. “We were mad coming in here, and when this team gets made, we make strides on the ice. We went out mad, and we were able to score right away.”

In the locker room afterwards, Maroon was clear in his statement about what had been said between period three and OT. “We said, ‘Hey, get your heads up. We’re going to win this hockey game.’ That being said, you can’t let that happen, 4-2. You can’t let that happen. They’re going to keep coming, and they’re a powerhouse team with a lot of offense. We’ll learn from our mistakes and move forward.” He also said about the intermission, “Once we got back in here we calmed back down a bit, we started talking, we relaxed a bit, and then you go out there and start the period, take it after them.”

He described the play in OT. “We had two good shifts, two pucks deep, a line change in there, turned the puck over, forced the puck over, two-on-one. The puck hit Crawford’s pad. We’ve been harping all year to shoot on Crawford’s pad, and it was a good shot by Kesler, and good rebound by [Beleskey]. We needed this game bad. We wanted this game, and we believed we could win this game.”

Back to Kesler, who said about the Blackhawks, “We know the situation, that they are on the brink of elimination, and they’re going to play their best hockey.” But to continue on this game, he said, “Ducks hockey. Not for the faint of heart. We like to make things interesting in here.” Sarcasm said in a quiet voice. “The thing is, we got mad, and we came in here, then we finished the job.”

Coach Quenneville on the other hand was confident, but stoic. “We didn’t start on time for the first time this series,” he said, adding that he wasn’t unhappy with what had happened, due to the fact that his team had come back well in period two, then had the amazing comeback to tie the game near the end.

And then he said something which sounds like cliché, but reads more like a warning. “It was a big game tonight, and the next game gets bigger, going home for game six.” Translation: “we’ve been here before, and we have no doubt that we’ll even the series at home.”

And you know, I wouldn’t spend any of my money betting against him. For those in Anaheim, the game on Saturday will be at 5pm. If necessary.

The only losses the Ducks have had this playoff season have been in OT. But they’ve also won three OT games now. The only time they have lost a game at all is in extra time.

Matt Beleskey had never scored a playoff OT goal before Monday. He’s a UFA this summer, and printed opinion has already said that he’s going to get wildly overpaid for his services with whoever gets him next.