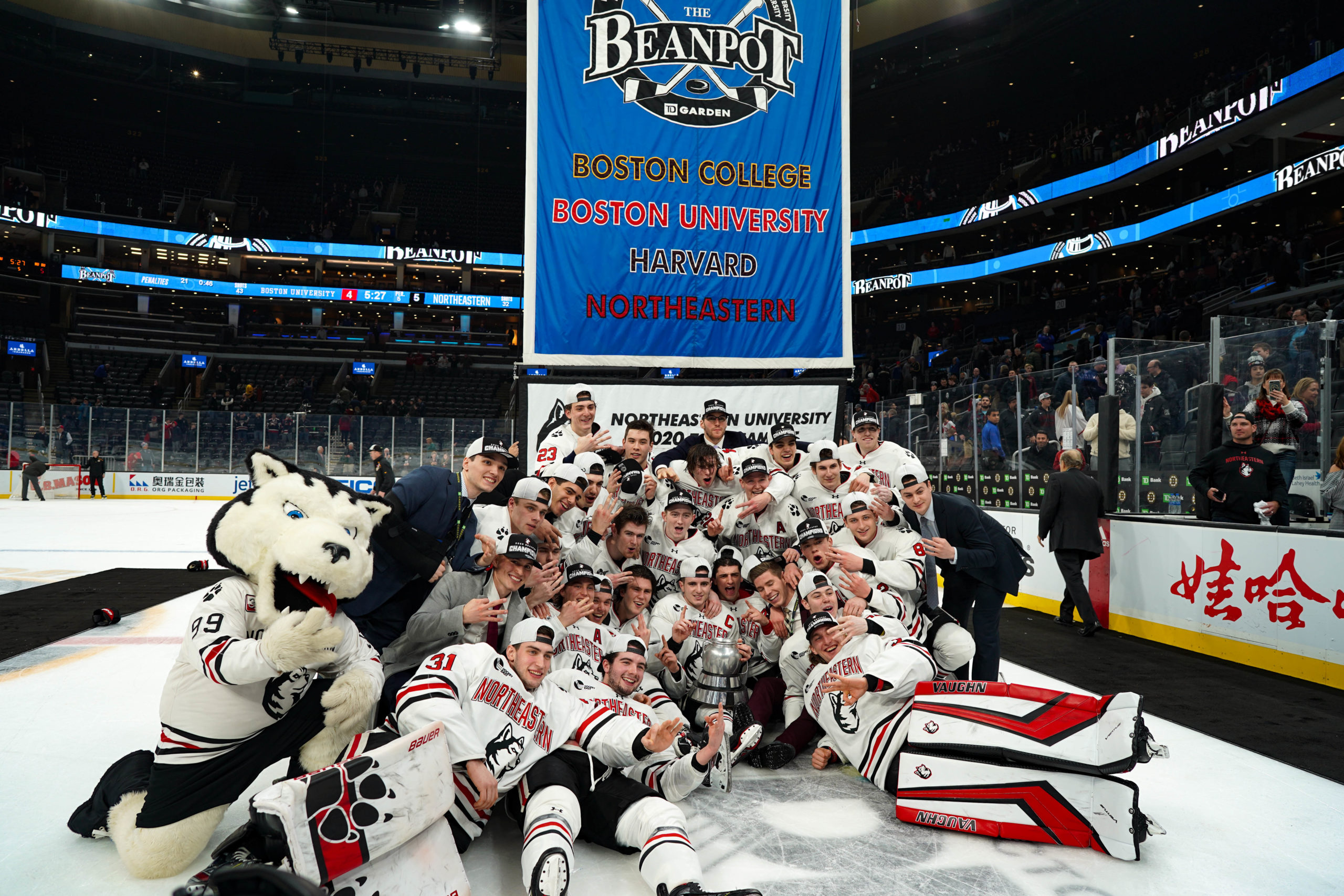 Boston- The Beanpot is famed for producing heated rivalries, worthy champions, controversy, and long nights at the Garden. On Monday night, Boston University and Northeastern University combined for a historic night. They played possibly the greatest game of the Beanpot’s 68 year history in front of the largest crowd in Beanpot history (17,850).

BU started the game rolling. Jake Wise cleaned up a rebound off Craig Pantano’s pad to start the scoring 2:49 into the night. Five minutes and a second later, Trevor Zegras lasered a puck home from the circle on a power play that followed a Tyler Madden tripping minor. BU kept their pressure up and outshot NU 11-6 in the opener. Craig Pantano held his own and kept the game at 2-0 at first intermission.

Northeastern exploded out of the second period gate. Tyler Madden got the Doghouse rolling with a left circle shot at 2:53. The goal was his 18th, tying the Vancouver Canucks draft pick for third in the nation’s goal scoring race. Fellow Vancouver pick Aidan McDonough tied the game almost two minutes later. Near the period’s mid-point, BU took a pair of penalties. Cam Crotty took a trip and Alex Vlasic took a cross-check. On the ensuing 5on3, Zach Solow potted the go-ahead goal for the Huskies. About two minutes after, Grant Jozefek ended the power play time with a goal of his own.

After four unanswered goals, Terrier Head Coach Albie O’Connell pulled Ashton Abel from the net. The freshman allowed four goals on 13 shots, all in the second period on eight shots faced. Sam Tucker entered the game and steadied the net for the Terriers to keep the score 4-2 at the second intermission.

BU benefited from a Husky penalty early in the third. Jordan Harris took a trip and David Farrance scored his 13th goal of the season. Northeastern kept BU at bay for much of the rest of the third. Tucker held his own in the BU net to keep his team in striking distance. He hit the bench late in the third for an extra skater. With 1.2 seconds left, Trevor Zegras punched home his second goal of the night to send the Dog Pound fans into a frenzy and tie the game.

Per NCAA rules, the game entered a five minute overtime to determine a winner for national pairwise consideration. BU outshot NU 5-0 but could not beat Craig Pantano. For NCAA purposes, the game ended in a 4-4 tie. The Terriers became the first team to go 0-0-2 in Beanpot history. There still was a trophy on the line, so the teams regrouped in the locker room and prepared for another long night at the Garden.

Late in the extra period, controversy hit. Patrick Harper was whistled off the ice for a tripping minor. BU coaches, players, and fans complained bitterly about the minor that Northeastern turned into an overtime power play chance. At 14:33, Jordan Harris ripped home his fourth goal of the season and ended the second longest Beanpot championship game with a 5-4 Husky win.

Trevor Zegras skated to one of the officials and gave him an earful about the Harper trip, only to earn a tack-on misconduct penalty. Many echoed his sentiment after the game.

BU’s tie puts them at 10-9-8 in the official record books. This is the fourth consecutive defeat in the Beanpot Championship game. This is the third time BU has gone five years or more without winning a Beanpot and first since their stretch of seven years from 1959-1965.

“I thought we played a terrific game…” commented a furious Albie O’Connell. “I’m not supposed to comment on the officials. But the one thing I will say is the diving in that game that was called; unreal. Karma didn’t catch up to them on that one. But it will.”

Sam Tucker stopped 13 shots in regulation that the NCAA will count and an additional five in overtime for a Beanpot game total of 18 saves on 19 shots faced.

The Terriers return to Hockey East play this weekend with a home-and-home against the New Hampshire Wildcats. Puck drops at 7 pm ET for both Friday night at the Whittemore Center in Durham, NH, and Saturday night at Agganis Arena in Boston.

Northeastern’s tie moves their record to 15-8-3. This is the school’s seventh Beanpot trophy and the first three-peat in school history. Northeastern has won three consecutive Beanpot games against BU.

Craig Pantano stopped 30 of 34 shots that the NCAA will count and an additional 10 in overtime for a game total of 40 of 44 shots in 94:12 played. For his efforts, the graduate transfer from Merrimack and Bridgewater, MA, native was awarded the Eberly Award as the Beanpot’s top goaltender. Across his two games, Pantano stopped 67 of 72 shots for a .931 save percentage.

Junior Zach Solow recorded a goal and an assist on the night. For his efforts, the Naples, FL, native was awarded the renamed Steve Nazzaro MVP Award. “This award could’ve gone to every guy on the team,” said Solow. “That’s what makes our team so special: every guy plays like an MVP. It’s a special feeling to win MVP, but I’ve got to thank my teammates, coaches, and everyone who helped to put me in this situation.”

Husky Head Coach Jim Madigan had praise for his team. “I thought it was a great hockey game. It was a big win for us. This is a team that people will be chasing here for a long while.”

“I trust the coaching staff,” said Captain Ryan Shea. “They brought in the players they have and every year we get closer and closer. The Beanpot lets us take off for the second half. The winning culture that we’ve built here; its amazing. I said between periods, this is why I came to Northeastern. I wanted to win the Beanpot, I wanted to win the Hockey East. Right now, it’s looking pretty good.”

Madigan expressed sympathy for BU’s plight. “From BU’s perspective, I’m sure they didn’t like the call. I’ve been there. We lost to BU in overtime on a PK situation. I get that.” He was referring to the 2015 Beanpot Championship game, which BU won on Matt Grzelyck’s OT goal following a Matt Bennington hooking minor. On the diving accusations, Madigan simply said “I’m not going to dignify that with a response.”

Northeastern returns to Hockey East play this weekend with a home-and-home series with HEA’s 2nd placed team, UMass Lowell. Curiously, the Beanpot champs sit in 12th place in the National pairwise rankings (good enough for a Tournament spot) yet are one point out of the last Hockey East playoff spot, sitting in 9th behind Providence. The RiverHawk series proves enormous for Northeastern.  Puck drops at 7:15 pm ET at Tsongas Center on Friday night and at 8 pm ET at Matthews Arena on Saturday night.