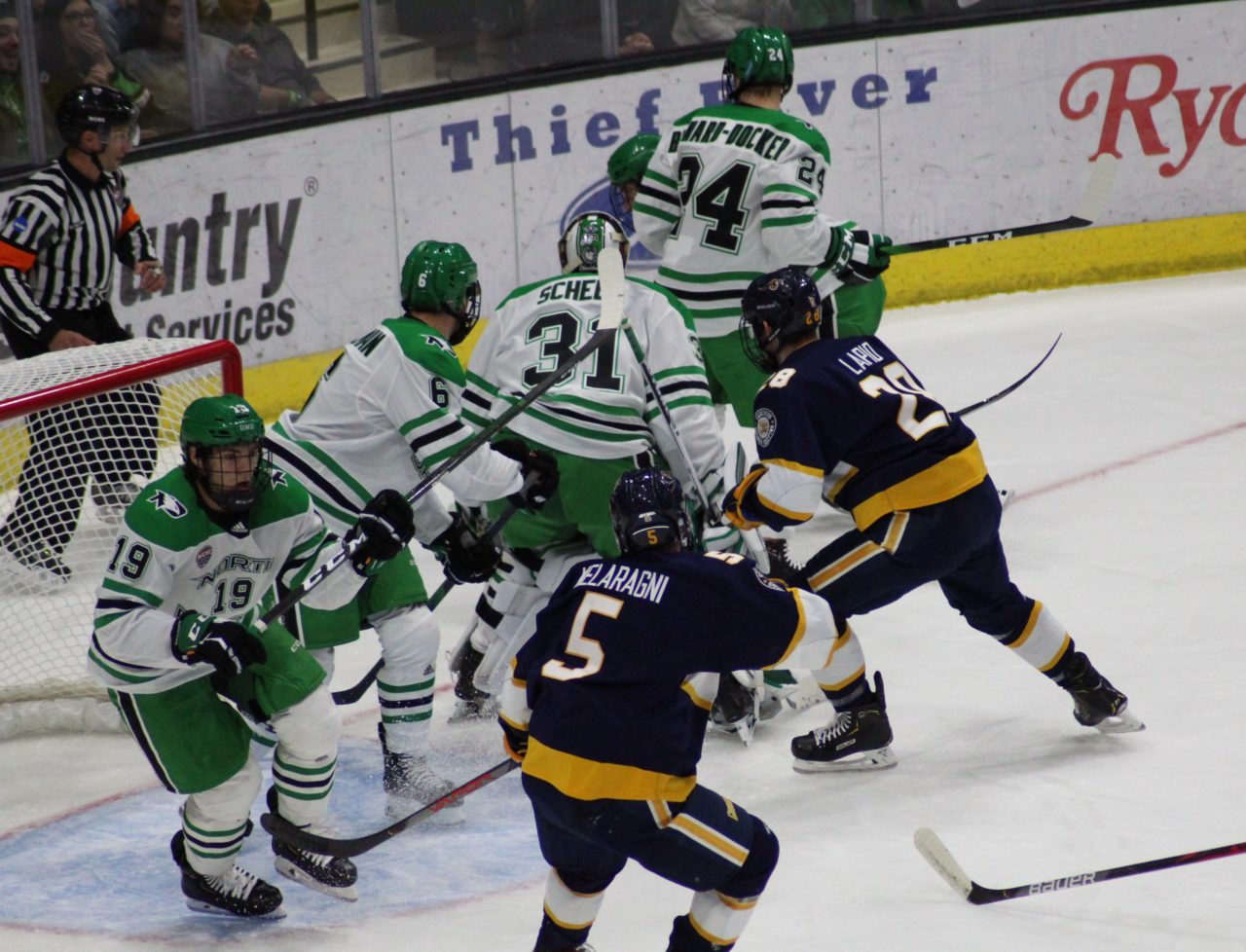 Canisius clogs up the front of the next early in game two against North Dakota.

Grand Forks, ND — On the board in the UND hockey team’s locker room there was a message.

“We have a quote on the board before the game, it was sharks only have one thought they smell blood and attack,” junior forward Jordan Kawaguchi said. “So, we smell blood we attack that was just kind of our mentality from the get-go and they got the first one and then once we got that first one we kind of just jumped on so it’s good.

The Fighting Hawks took that message to heart.

After giving up a goal at the 04:05 mark of the first period, the Hawks went into the first intermission and regrouped.  They came out and took the game away from Canisius.

What did the Hawks do?

“I think guys upping the ante on their play,” head coach Brad Berry said. “We went into the locker room after the first period and that wasn’t good enough. We talked about it and guys needed to take a step. I think some of our older guys did take a step in that second period there.

“So, it was a learning experience for us as far as knowing that you have to make sure you bring it every shift and every period. (I am) just proud of the way our guys did respond, you know after the first.”

And respond they did. The Hawks got two goals from Mark Senden and Colin Adams in the second period to take a 2-1 lead.

“I think that goes back to not only D but our forwards, too,” Berry said. “When you talk about tracking back through the neutral zone, it’s very easy to go into the offensive zone and if your play gets snuffed and goes the other way — not tracking back. It comes back to a workmanlike mentality with our forwards helping our d-men out to protect the ice in front of Adam Sheel. So, it’s a five man mentality.”

One of the other things that stuck out this weekend was that the Hawks got balanced scoring from all four lines. Everyone chipped in. There weren’t any passengers. After two games, 19 Fighting Hawks players have registered a point.

“I think when you look at all the different lines, there’s skill on all the lines,” Berry said. It’s nice to have four lines that can contribute offensively”

Next weekend, the Hawks will face a tough opponent in the Minnesota State Mavericks.