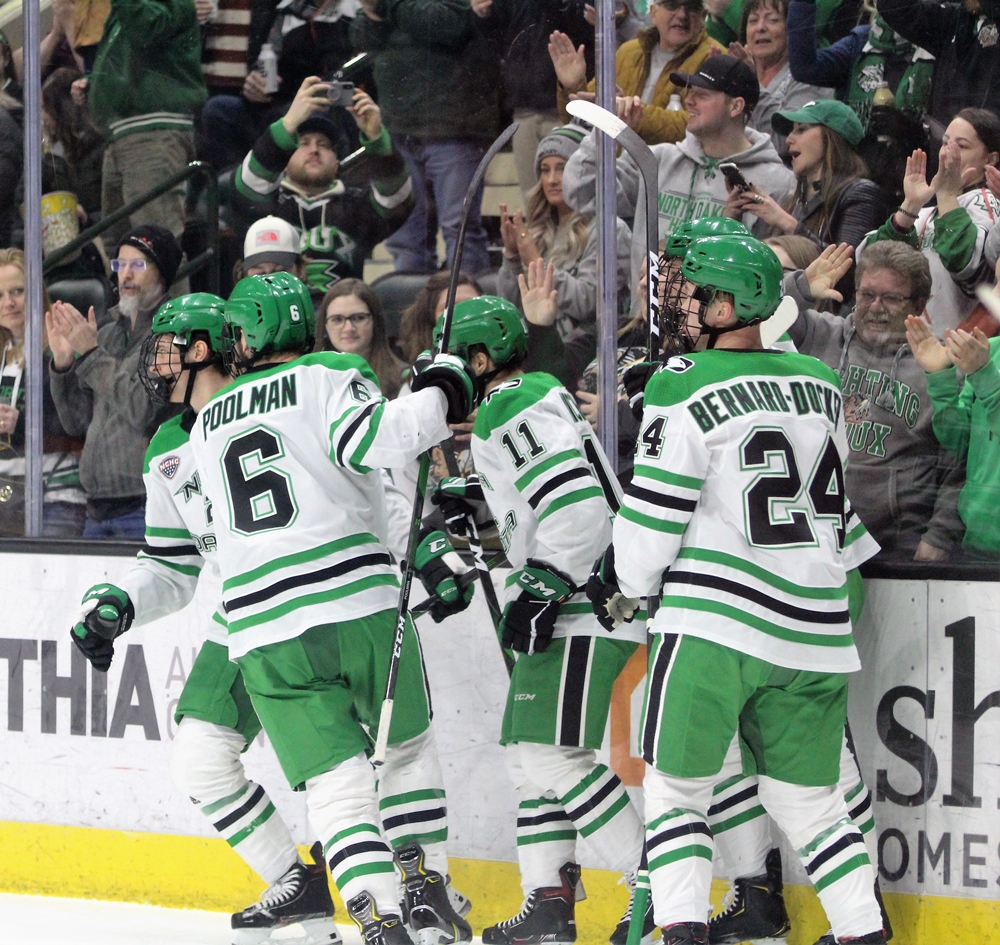 Grand Forks, ND – The University of North Dakota and Denver are rivals. Neither team likes the other very much. The players on both sides look forward to this series every season. This season, the Fighting Hawks have gotten the better of the Pioneers. Entering season series finale against the Pioneers, the Hawks had a 2-0-1 record.

During the first three games of the series, only one of the games was close, game one, a 1-1 tie. With Saturday’s 3-1 win, the Hawks have taken 11 of a possible 12 conference points. What’s more impressive, the Fighting Hawks had outscored the Pioneers 12-4. Make no mistake about it, Saturday’s win wasn’t easy, it was more like a playoff game. A bare-knuckle street fight.

What a difference a year makes. Last season, the Hawks were 1-4-1 against the Denver Pioneers. The 2019-20 season has been a lot kinder to the Fighting Hawks.

From the beginning of the season, this team has been on a mission. After having Denver end their season last spring, the Hawks had some tough conversations during the offseason. During the summer, they buckled down and went to work. Finally, that hard work is paying off.

“We missed the tournament the past two years, it’s kind of tough after such a long streak. We kind of took it personally,” junior forward Collin Adams said. “I think every guy just wanted to get better in the summer and it’s paying off for us now.”

“Yeah, there are some similarities,” head coach Brad Berry said. “No team is exactly the same, but there are some similarities in the teams. The one thing and I keep talking about it is depth. We had depth back in 2015-16 and we have depth now. Knock on wood, you have to remain free of injuries. You can’t be banged up at the end of the year. We have to make sure that we monitor our practices and the way we train here over the next few weeks and make sure we’re relatively healthy as we can going because that’s a big deal.”

Here are updated standings after this weekend’s results. There are three series remaining for each team. North Dakota is closing in on its third Penrose Cup. Or to quote former UND forward Nick Schmaltz, “a Penarosa Cup.”

UND Junior goalie Peter Thome entered Saturday’s game with a 5-0-1 record, a 1.30 GAA and a .935 save percentage.  During his impressive run, Thome has been a brick wall. He’s given up nine goals, five of them while UND was on the penalty kill. Breaking it down further, he’s only given up five goals in the last five games. Thome’s efforts haven’t gone unnoticed.

“He did it in style tonight,” Berry said. “There were times in the second when they were making a push and in the third that he had to make not only one but two or three saves on the doorstep to make sure that puck didn’t go in. He has a focused to him now, and he has to keep moving forward here but you know he’s doing a good job here coming in and giving us a chance to win every night.”