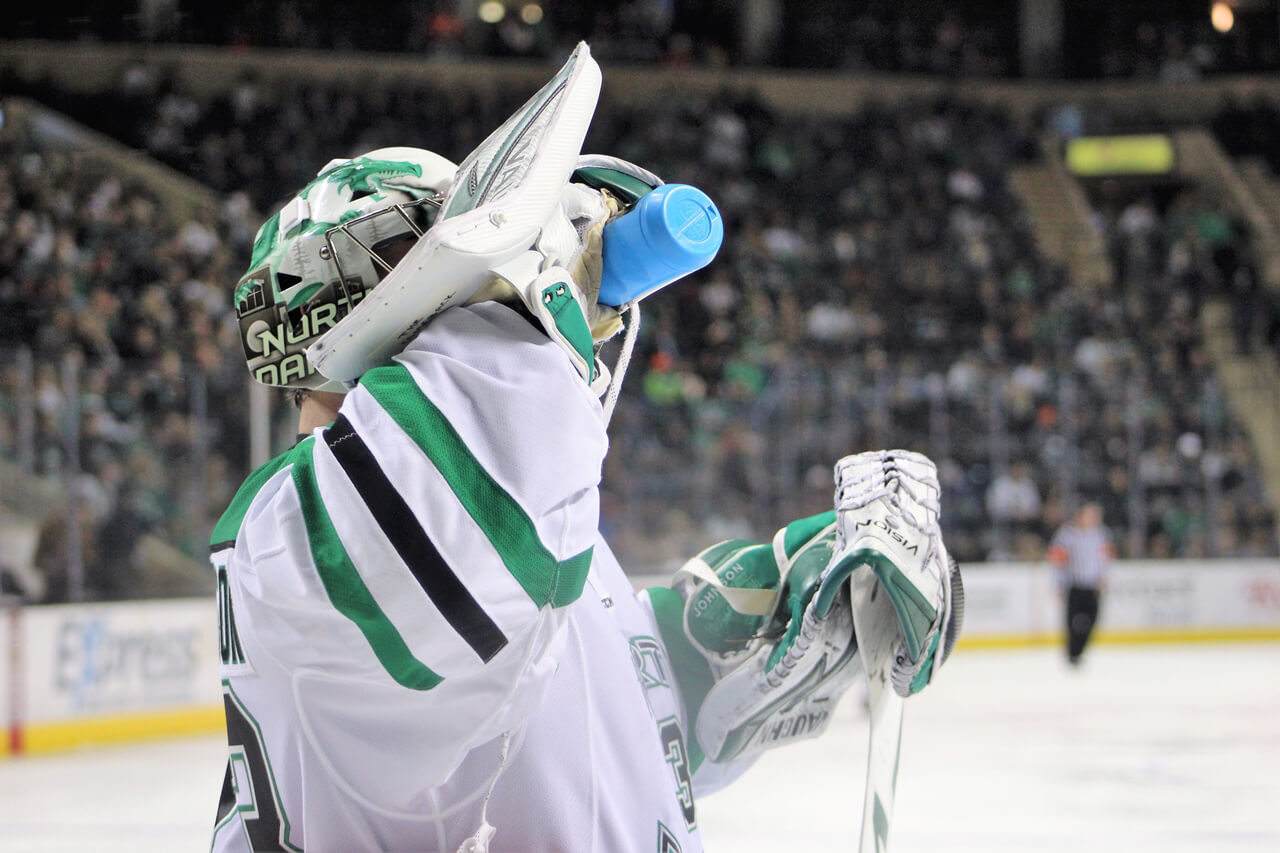 The National Collegiate Hockey Conference is a tough league, at times I have compared the conference to a meat grinder. Through four and a half seasons, the rivalries around the conference have been festering and growing. Tonight, the fans in Grand Forks, ND saw an epic tilt between two very good, physical hockey teams.

Last season, the University of North Dakota lost three straight games to Western Michigan Broncos. On Friday night, the Fighting Hawks were looking to exact some revenge against the NCHC leading Broncos.

When the game was over, the two teams had to be separated by the on-ice officials. Yep, old-time hockey.

Last weekend, senior captain Austin Poganski took the blame for not getting his team ready to open the series against the Union College. Fast forward one week, the St. Cloud, Minnesota native took the team on his back and helped propel the Fighting Hawks to a 3-2 lead after one period of play. Poganski played with a chip on his shoulder, with something to prove. Poganski also played a fast, heavy game.

“I thought that we started well,” Poganski said. I think that was a big key to our success was starting well. Throughout the past three games, we haven’t started very well and it kind of lead to a few losses that we kind of had to play from behind. When we’re scoring early and playing well, being in the game, that’s “when we’re the most successful.

After scoring just two goals through 16 games, Poganski had doubled his season goal total by the end of the first period.

“Things haven’t come easy for Austin (Poganski),” Berry said. “It’s not to say that he’s not been working hard. He’s been working extremely hard. Tonight, he got rewarded for doing the things that Pogo does. He skates fast. He’s hard and heavy on pucks. Tonight, he made a couple of plays and it got us going. When your captain does that, usually the rest of the team follows.

With the Broncos pressing at the end of the game, the unsung hero was senior forward Johnny Simonson who would take the crucial, game-ending faceoff. If the Broncos had managed to score, they would’ve had a five on three power play to the start the overtime period. Simonson beared down and won the draw icing the game.

“We look at our stats quite a bit and he leads our team in faceoff wins,” Berry said. “Rhett Gardner was in the box. Nick Jones was out of the lineup tonight. Simo has been there. He’s played a heck of a year so far. He’s done everything we’ve asked him to. Again, it shows you kind of his leadership, to make sure that he wins the draw at end of the game.”

After missed eight games with a lower-body injury, senior All-American goalie Cam Johnson was solid in net stopping 18-of-21 shots. With the win, Johnson improves to 6-2-1 on the season.

“It feels unbelievable,” Johnson said. “It was a long month, or whatever it was and a long eight games. It felt good to get the win here at the Ralph.