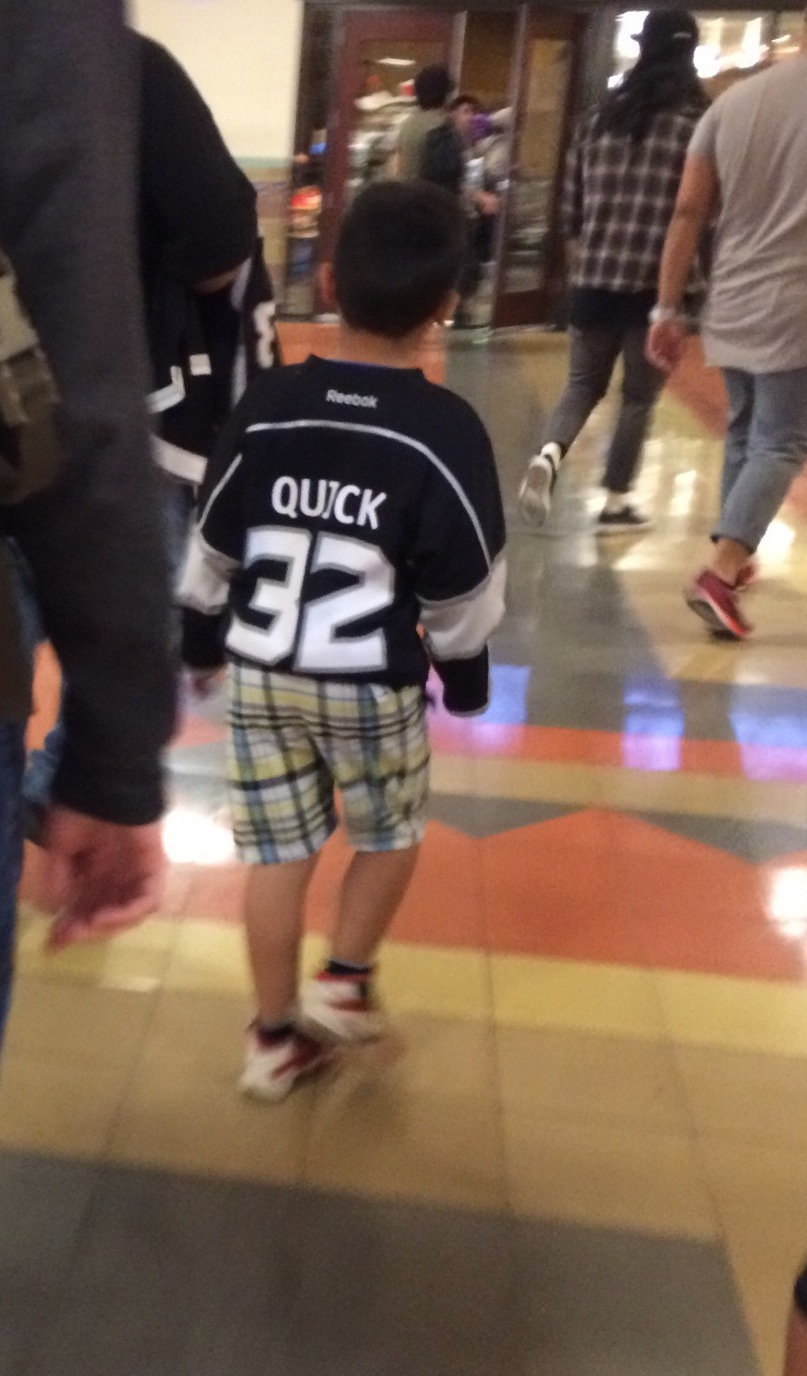 The Kings are nothing if not streaky. Their record is of winning, or losing, in bunches this year so far. Three losses, four wins, three losses, three wins, four losses (one OT point) and, coming into Saturday, a win. Logically, then, they would get another one on the way to a third on Sunday versus Anaheim.

It started well, even before the puck was dropped. It was Rogie Vachon day, in honor of the Kings’ first jersey retiree and now Hall of Fame member. Hopefully you saw the induction ceremony this past Monday.

Long, long overdue this, and I don’t say that as a West Coaster. I’m Canadian, born and raised in Montreal, and not just for the Canadiens connection, I think Rogie deserves this. His numbers alone, especially playing in LA where he oftentimes got no support, demand a spot in the Hall. His long playing career that never wavered in consistency is another. And there’s the fact that every other goalie of his generation who is even close to his stature is already in (Dryden, Esposito, Giacomin, Parent, Cheevers).

Vachon received a very nice wristwatch from the team, given to him by Luc Robitaille in a ceremony emceed by Bob Miller. That’s three HHOF members on the ice at one time. And you thought there was no hockey tradition in LA.

So to the game. Kopitar’s still out, which means that the lines are a bit addled, namely that line number one consists of Carter and the Kids, formerly known (that is to say, known by everyone except me, since I just made up that way better nickname) as “That 70s Line.” Second was Dowd, Setoguchi, and Brown, and that’s where the surprise is. Brown’s issues—losing the captaincy—are well known. Setoguchi is a reclamation project. And Dowd had played just five career games before this season after being drafted in the 7th round in 2009. Hardly the marker of sure success, but he’s been good, and he added an assist to his season’s total of 9 (2 goals) coming into the afternoon.

The third line sees a promotion, with Jordan Nolan joining Dwight King and Trevor Lewis. Nolan has been in and out of the lineup, most recently sitting five games in early to mid-November. His last four games, this one included, have him playing about ten minutes a game, but it’s increasing, and especially for not being relegated to the fourth line.

The Devils scored the first goal, getting just four shots in period one and exiting the frame up 1-0. The Kings came back in period two with two unanswered goals, the first on a nice spin-around backhand pass by Dowd to Martinez on the blueline and the second on a horrible turnover where New Jersey’s Andy Greene threw a puck to Damon Severson who seemed to bobble the puck out to the slot. Unclear what he was doing—trying to tip it to a guy in the slot? Maybe trying to tip it behind him to the winger at the hashmarks? Doesn’t matter, as Pearson cruised in and one-timed a slapshot that went off Schneider’s shoulder and dropped down behind him into the net.

The shots after two periods were 22-9 for LA.

In the third, one important change in lines had Nick Shore moving up to play between King and Nolan on line three. And he was visible, making a case for his place once the lines go back to what they were with Kopitar set to come back soon.

By the end of three, they were 28-23 after New Jersey got active early in the period. The Kings had come out and gotten goal number three at 45 seconds, a two-on-one that Carter did a keeper on. He shot, followed the puck to the net, and poked it backhand between the goalie’s pads.

Near the end of the period, and the game, Lappin of the Devils got it to 3-2 with a goal off a scramble. Guarding the net for the Kings was Forbort, and it went off him, but was not his fault. The shot was intended to bank in off of a leg. The Kings responded with an empty net goal near the end, coming from Muzzin. He didn’t intend to score but rather just to throw it down the ice, but the shot was true, helped by Dustin Brown running interference and knocking the defending stick of Severson away as the puck rolled into the New Jersey cage.

Jeff Carter afterwards commented that the Kings have to be sharp as they head to Anaheim tomorrow: “We’re going to need everybody. You’re not going to beat Anaheim with one, two, three lines. You’re going to need four lines, six D, everybody. They’re a deep team. It’s always fun games against them. It gets heated, and, uh, we’re going to be ready, for sure.”

Sutter would later comment that he thinks his team is playing well right now. “We’re playing as good as we can.” He refused to talk about streaks.

Rogie’s childhood is profiled in my book Living the Hockey Dream. Please read.

Kopitar skated at the LA practice facility this morning, rather than at Staples. Sutter didn’t rule him out for Sunday. Wednesday against the Islanders is more likely.