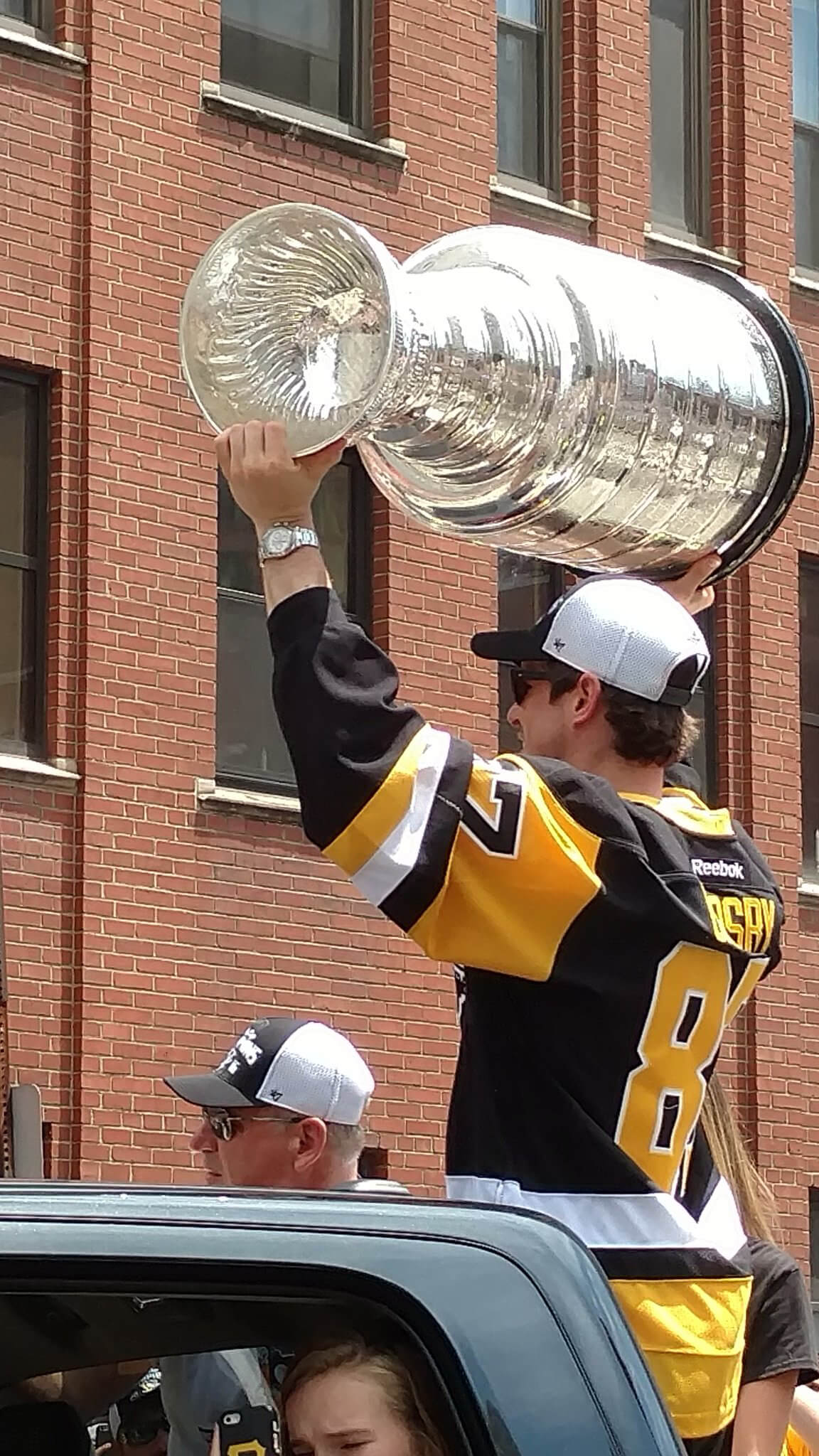 No Rest for Rutherford, Who Stands Pat at G

Just over a week removed from their victory parade, the Pittsburgh Penguins have started taking off for their offseason homes and summer vacations, the reward for the months-long grind that culminated in the franchise’s fourth Stanley Cup championship.

For Jim Rutherford, just crowned GM of the Year at the NHL Awards, and his staff, however, fun will have to wait.

“I haven’t had a chance to enjoy it,” Rutherford told NHL Network Saturday, from the floor of the entry draft in Buffalo. “We’ll get into July and start to reflect on what really happened, and that’ll be fun. It’s kind of been a whirlwind now, but I have a really good hockey staff and we were working along and being prepared for the draft and the things we were going to do here.”

What Rutherford and Co. didn’t do at the draft was bigger than what they did.

With an enviable but expensive situation in goal – 22-year-old Matt Murray backstopped the Penguins to the Cup on an entry-level deal with a $620,000 cap hit, while 32-year-old Marc-Andre Fleury has three years remaining at $5.75 million per – the team listened to offers for their longtime franchise netminder.

In the end, the team most closely tied to talks for Fleury, the Calgary Flames, ended their goalie search Friday by trading for Brian Elliott from the St. Louis Blues. While speculation had Rutherford reaching for the stars by asking for the Flames’ first-round pick – No. 6 overall – Calgary got Elliott for the comparative bargain of a second-round pick at No. 35 and a conditional third-rounder in 2018.

That’s just fine with Rutherford, who says he has about a $1 million salary cap cushion and doesn’t feel pressured to make a move on Fleury – not by money, and not by the issue of who to protect in the expansion draft a year from now.

“My preference is to start the season with our two goalies,” Rutherford said. “It gives us a really strong 1-2 combination. I’m not overly concerned at this point about dealing with the expansion draft; we’ll deal with that at some point.

“Matt Murray had a terrific run for us, but he hasn’t played a full season in the league. He’s a terrific goalie; he’s going to have a very good career. And Marc-Andre Fleury’s been the franchise goalie for a number of years. So we’re in a really strong position, and we’ll just go into the season and see how it goes.”

The Penguins bought themselves $800,000 in cap space Saturday morning by trading 24-year-old right winger Beau Bennett to the New Jersey Devils in exchange for a third-round draft pick at No. 77.

Since the Penguins made him the highest-drafted native Californian at No. 20 overall in 2010, Bennett’s NHL career has been a frustrating exercise of flashing the skill that made him a first-rounder, interrupted time and time again with stints on the injured reserve list.

For no one was that more frustrating than Bennett himself. In March, while dealing with a recurring right shoulder injury, he admitted he had started to question whether hockey was even the right sport for him.

In New Jersey, he gets a fresh start with old friends – GM Ray Shero, who drafted him with the Penguins, as well as head coach John Hynes, assistant GM Tom Fitzgerald and assistant coach Alain Nasreddine.

“With the number of young guys we have, we felt it was time to give him a change,” Rutherford said. “Probably just in the last week leading up to the draft, after we looked at our team, talked to the coaching staff about who fits, it became more apparent that Beau wasn’t going to fit with us going forward. We have guys ahead of him – guys that can skate, puck-pressure guys. He plays a little different style.

“There were a couple of other teams that had interest, but New Jersey’s the one that pursued it the most. He’s a good player and, if he can stay healthy, he’ll go on to be a good player in New Jersey. But it was hard. He could never stay healthy long enough to gain any momentum and get his confidence, but [he has] a very high skill level. Maybe it’s behind him now, hard to say. But he certainly didn’t have a lot of luck with us.”

Then it was on to the business of draft weekend, where the Penguins added six members to the organization.

After giving up their first-round pick last summer in the Phil Kessel trade – ironically, the No. 30 spot originally belonging to Steeltown ended up being used by the Anahaim Ducks to draft center Sam Steel – the Penguins’ first selection came at No. 55, where they chose Swedish goaltender Filip Gustavsson.

Gustavsson’s scouting report reads a lot like what the Penguins like about Murray – a technically sound goalie with poise, composure and confidence that makes his team more confident in front of him. He’s backstopped Team Sweden to medals at international events including silver at the U-18 Championship, where he was named Top Goaltender.

“I was leaning more toward taking defensemen, but we had that goalie rated so high. He was the No. 1-rated goalie in the draft,” Rutherford said. “We really, really like him a lot. Surprised he was still there, so we really couldn’t pass on him.”

The Penguins next drafted right wing Kasper Bjorkqvist of Finland at No. 61. “Our European scouts loved this player,” Rutherford said. “They felt so adamant about him, and he’s just a really good, all-around center.”

After that, the team moved on to Rutherford’s priority of drafting defensemen, selecting four: Connor Hall of Kitchener in the OHL (No. 77), Ryan Jones of Lincoln in the USHL (No. 121), Niclas Almari of Finland (No. 151) and Joseph Masonius of the University of Connecticut (No. 181).

The picks of Hall and Jones in particular seemed like departures for the Penguins, who won the Stanley Cup with a speed game that relied on skilled, mobile blueliners contributing to the offensive push. Both are known more for playing a physical game with an edge.

“He’s a good skater, but he’s more of a throwback defenseman. Plays physical, good team guy, more of a defensive guy,” Rutherford said of Hall. “Same with Jones; they’re really a lot alike. Jones is a little bit older (at 20), a little bit bigger. But both these guys are more defensive defensemen.”

Rutherford said the organization “absolutely” needed to add blueliners in that mold. “I think you have to have both [styles]. You have to have guys who can play a little bit physical and defend. As long as they can skate, there’s a place for them. Both of these guys are good skaters.”

Up against the salary cap, don’t expect the Penguins to be active next Friday when free agency opens, unless more moves are made. Asked if he had the flexibility to acquire even one player of interest, Rutherford said “probably not.”

As for who they’ll lose, defenseman Ben Lovejoy will hit the unrestricted free agent market in line for a significant raise from his $1.2 million salary that the Penguins probably won’t be able to match.

“Every time I see one of my teammates, they ask me if I’m coming back, and the answer is I don’t know,” Lovejoy said. “This place has been so good to me. I’ve spent the better part of my hockey career here; this place has become home. I love the guys on this team; I love how we play. I love winning.

“There is no place in the NHL that treats players better than we’re treated here.  Everybody in the NHL talks about how dedicated teams are to winning; this place puts their money where their mouth is. The team goes above and beyond; everything we do is geared toward making us a better team. This is a special place.”

Although they won’t qualify restricted free agent Justin Schultz at his existing $3.9 million salary, there might be room for discussion with a 25-year-old, offensive-minded blueliner who found a great fit in Pittsburgh after letdowns with two other organizations.

“I’d love to [stay],” Schultz said. “Obviously I love playing here, I love the guys, and everyone involved in the organization’s been awesome to me. We want to play a fast game, move the puck quick, and I think my mobility helped with that.”

Other than those two, the Stanley Cup-winning lineup could largely remain intact, depending on whether 39-year-old forward Matt Cullen decides to call it a career on the high note of a second Stanley Cup championship. Backup goaltender Jeff Zatkoff, who stole Game 1 of the Penguins’ opening-round series with the New York Rangers when both Fleury and Murray were out with concussions, is also likely to move on.

What’s not going to happen this summer?

“Let me make this easy on everybody. We’re not trading [Evgeni] Malkin, OK?” Rutherford told NHL Network, responding to media speculation over the past week. “You guys start [rumors]. The media’s so competitive and everybody runs out of things to talk about, so people have to make them up.

“We’ve never talked about it, we don’t want to do it, so that’s the end of that.”