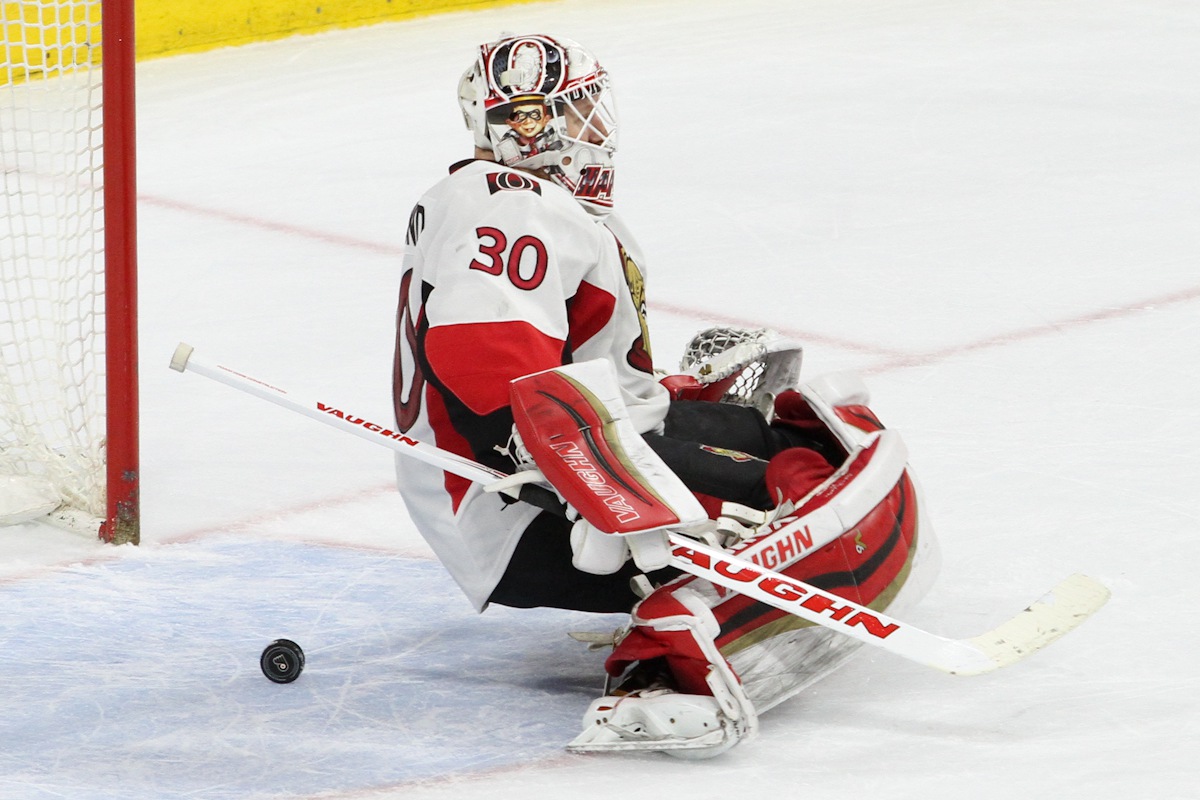 No Plan at All

No particular plan. That’s what Guy Boucher said Saturday that he had going for Sunday with his team having lost to LA and heading down I-5 to Anaheim for Sunday. No plan? They’d had two full days off after winning against San Jose midweek. Now, maybe playing the Kings was distracting, and there was no fully worked out strategy for Anaheim, which plays quite a different game from LA.

But no plan at all? Seemed hard to believe, until you saw the team that hit the ice in the OC on Sunday at 1pm. They were down 3-1 by the end of a period, and by the middle of two, were exactly on pace for the number of shots they’d had on Saturday—20. Not to mention that they were already down 4-1, which was the score they’d lost by Saturday afternoon.

No plan indeed. One thing Boucher did was swap goalies after one, with Mike Condon having let in those three on 13 shots. Were they his fault? The first, no—wrist shot from the point and rebound swept in. The second one, wrister that hit the defense and was swept in by Perry. The third one, no again—puck swept across the crease from left to right and back again, the second time hitting defenseman Cody Ceci and going under the goalie’s glove.

And it wasn’t all bad. After the Ducks opened the scoring at 2:58, the Senators tied the game on the power play with nearly eight minutes gone.

So why the adjustment to put in a goalie who has a save percentage in the .700-something range and who was supposedly demoted to the AHL, refusing to go, before he was brought back on board due to the goalie emergency situation happening with the Senators right now? Well, what else could they do? Their defense was horrendous.

It had changed slightly from Saturday, with meathead Borowiecki, he of the hit-from-behind on Toffoli, sitting and Andreas Englund coming back in after missing one. (His numbers are not good anyway—three games played on the year with times in the nine, eight, and four-minute range). Englund got in about 17 minutes on Sunday. But the defensive pairings are anything but established.

Thanks to my press buddy Joe D, here are the facts about the D for Ottawa just during period one: at least five pairings, and Dion Phaneuf pairing up with all of Ceci, Wideman, and Karlsson. In addition, Karlsson, who was slated to start with Method, also got time with Englund. When Joe asked about this after the game, all Erik Karlsson would say was, “You’ll have to ask the coach.”

The lack of D was apparent as the Ducks got their fourth goal, which was just one of a number of plays where rushes turned the Ottawa blueliners inside out. The goal came with a three-man rush where the defense once again got turned around. Vermette passed it over to Ritchie, who had nothing to do but bury the puck in the left side of a wide open net. Not the goalie’s fault.

The Ducks did give back a little something something (yes, I said that twice on purpose) as the period ended in the form of a Corey Perry penalty with 3.9 seconds left. That obviously carried over into a fresh-ice power play to begin the third, but if Boucher had planned a man-advantage attack, he certainly didn’t count on the Sens doing nothing and the Ducks getting a two-on-one in the form of Logan Shaw and Cogliano. Shaw labeled a beautiful slapper to the glove side and saw it hit off the post.

Nothing came of that, but the Senators ended the PP with 1 SOG, a slapper from well out that was never going to beat an NHL goalie.

They would get another chance just after that one expired when Kase closed his hand on the puck in the defensive zone. The shots were 25-14 at the outset. More penalty calls going both ways ended the sequence with the shots at 27-18. Then Ottawa took yet one more, and the Ducks scored goal #5. It came off a shot from the point that Vatanen followed to the net. Perry got a stick on it and the rebound came to Vatanen, who swept it into the net, whirled to his right, and smiled at the crowd through the glass.

The Ducks’ lineup, just to get to this before it’s too late, featured two somewhat newcomers. They both took up space on the fourth line, wearing #64 (Stefan Noesen) and #48 (Logan Shaw). It was Noesen’s fifth NHL game. He does have one goal in his career. Shaw was in his ninth of the year and 62nd all-time, and he has a goal this year and seven total. Sitting was Jared Boll. On waivers and cleared, but down in the AHL, is Ryan Garbutt.

But their newer acquisition who made the greatest impact was Ondrej Kase, who played about 12:48 but was made note of by Carlyle after the game: “The addition of Kase has rounded out the line a lot,” he said. “They start with the puck a lot, and that’s a great asset, when you can have a center iceman who is leading the league [Vermette]. . . .” That third line of Anaheim created the team’s fourth goal. Kase had the secondary assist.

The fifth tally came in the third, the only scoring in that period. It was the aforementioned Vatanen goal, and it put the Sens’ road trip hopes of being at .500 in the bin. Pageau commented on that after, saying, “We thought the first power play goal we had to bring us back in the game was huge, but we’ve got to be better on the special teams.” He later said, “We would have liked to come back .500, but we played Pittsburgh, San Jose, LA, and these are among the top ten teams in the league, Cup contenders. We knew from the first game it would be a big challenge for our team. We talked before the game that if we could get the win it would be a really big road trip, .500, but you know, we came out short.”

Ottawa came into the afternoon second in the Atlantic despite losing Saturday and with 34 points. The Ducks were tied for third in the Pacific with 33. Ottawa hardly looked like a team about equal in the standings to the Ducks, who are now 6-1-1 in the last couple of weeks and consistent, moreso than earlier in the year.

Carlyle put the capper on it: “There are no easy ones in the NHL, and you’re never going to take any team lightly.” He said that the team wanted to do well early, “Give ourselves a good strong start, and then build on it the rest of the game.” He said that the team played flat after the PP goal by Ottawa, but that the team responded well in the second, a period that’s been tough for the Ducks this year, he noted.

“Our ability to play fast and execute fast is getting better,” he said, “And that’s what we’re really going to focus on. We believe that’s the way the game’s trended—getting through the neutral ice, getting the forecheck going, drawing penalties, and wearing the opposition down.”

They’ll need those skills and more in their upcoming road trip.

The Ducks now go on the road for six games between now and Dec. 22, and then they come home for Christmas and one game versus San Jose before more road games—two more.

Ducks fans, you read, right? Read my hockey books. Put “Brian Kennedy hockey” into a search engine, and you’ll find them. Growing Up Hockey is the classic. Facing Wayne Gretzky is the newest.