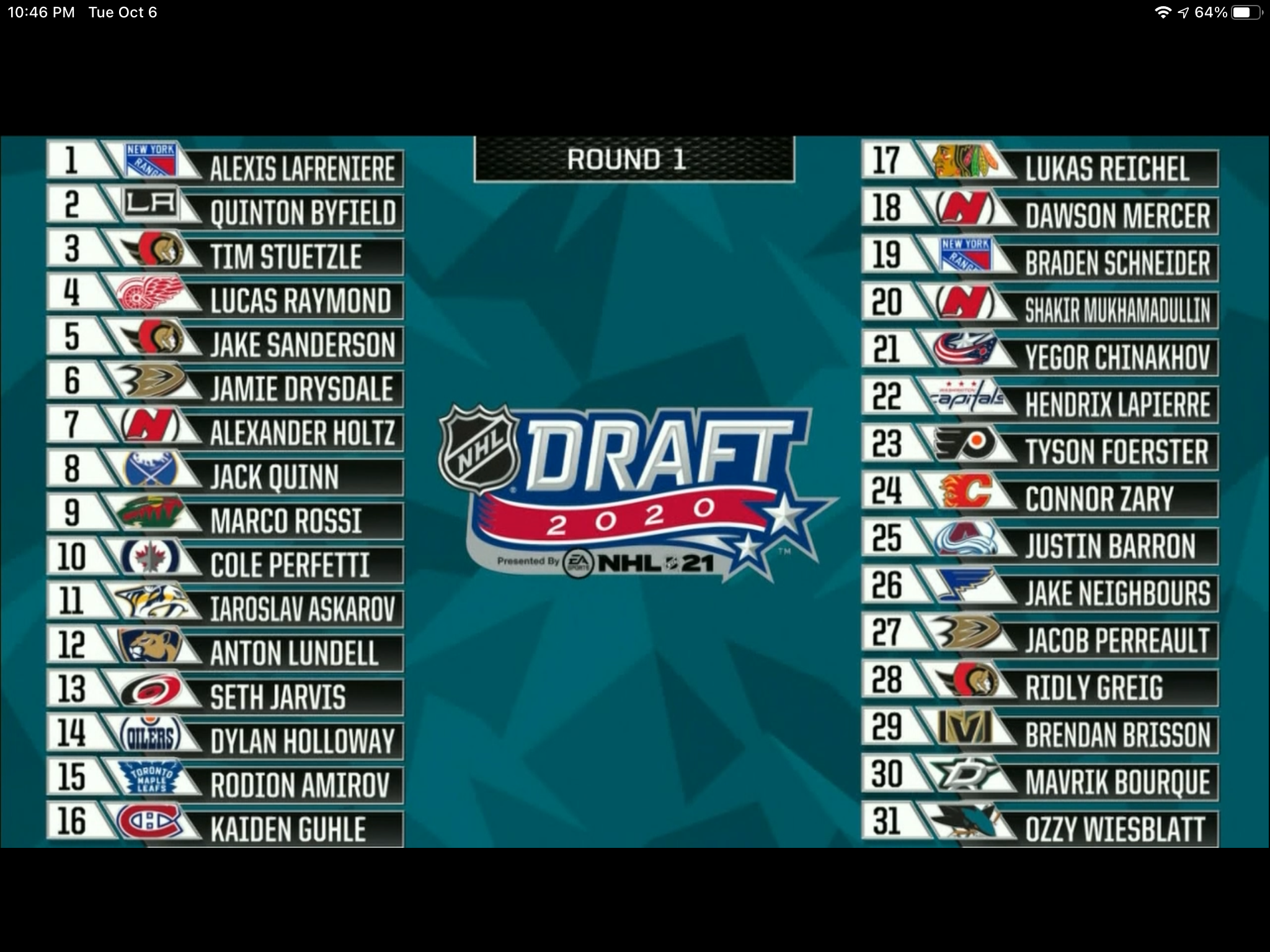 NHL Draft, Day One: The Expected, Surprises and Questions

For the class of 2020, Tuesday brought a certain degree of relief as much as it did clarity. Since the pause of the 2019-20 regular season and the subsequent trickle-down in nearly every other major, competitive, organized hockey league across the globe due to COVID-19, the draft-eligible prospects have been wondering about the implications the global pandemic would have on the league’s entry draft and ostensibly, their careers in the NHL.

On Tuesday, 31 prospects were finally able to put the mystery behind them in the draft’s opening round. More than 180 others will have to wait one more sleep before realizing the next step in their path, but when you’ve waited as long as they have, that’s nothing. In examining the first round it’s worth re-visiting what was mostly a formality versus a surprise? And, what else might we expect as the draft closes out tomorrow afternoon? Here’s a review of that and then some.

Perhaps the only thing more obvious than Alexis Lafreniere, the dynamic winger out of the QMJHL’s Rimouski, going first overall was that Jeff Gorton and company were going to decline to make any definitive statement regarding its intentions with the first overall pick the club won in the league’s second phase of the draft lottery back on Aug. 10. Even in an extended scouting period, Lafreniere never wavered and maintained his spot atop the draft rankings in a season in which he connected for 35 goals and 112 points in 52 games.

“I think when the ball came out of the machine,” Rangers GM Jeff Gorton said when asked when he knew Lafreniere was going to be the pick whenever the draft was to occur. “We knew he was going to be our guy.  For us, it was pretty clear-cut how we felt about him.”

The winger said it was around the time he entered juniors where he first allowed himself to think he might just be among the top of his age group and ultimately, his draft class.

“I think a couple years ago when I came to Rimouski,” Lafreniere said. “I wanted to improve as a player and play some good hockey. I had a couple of good seasons and I told myself that I had to work hard and had to keep getting better and that’s what I did and we’re here today.”

Next in line were consensus top-three picks, Quinton Byfield and Tim Stutzle, picked by L.A. and Ottawa, respectively. The jury may have been out on its order, but the fact that they were unavailable to the 31st place Red Wings at fourth overall was expected. In Byfield, the Kings land a 6-foot-4 center with all sorts of dynamic qualities you might not expect from someone his size. His ceiling could very well be a top center. Meanwhile, Sutzle, one of two top-five picks by Pierre Dorion and the Senators, should fit into their rebuilding plan well as a skillful winger with a season in the DEL under his belt.

And just as unsurprising? If you looked at the socially distanced set up from most clubs’ war rooms, you might have already known. But with the absence of housing GMs and club personnel under one roof, it seemed possible that the market could stall–and indeed it did. In total, just two transactions were made on Tuesday by three teams. Calgary flipped 19 for 22 and a third with the Rangers before flipping 22 for 24 with Washington. Max Domi and Josh Anderson, two NHL bodies (and pretty good ones at that) were flipped prior to the Draft, but GMs admitted it was remarkably quiet once the clock started running.

The trade activity as it relates to NHL contracts on the Friday–or first night of the draft, hasn’t been as visible in recent years. Rather it’s been a jam-packed second day. Time will tell, but it’s possible the virtual impact is far-reaching. Coupled with a compressed schedule and we might have a lot of GMs waiting to make their moves.

For awhile, the draft almost looked like a carbon copy of some of the projected rankings. All ten of the top-10 ranked prospects according to Sportsnet, TSN and The Athletic were selected before the 11th pick. Despite some talk that a team in the single-digit pick capacity might try and grab for Yaroslav Askarov, ranked 11th by each of the above-mentioned media outlets, went that exact spot to the Nashville Predators, the second-straight year in which a goaltender was selected in the top-half of the first round (Spencer Knight, 13th in 2019).

Shakir Mukhamadullin went 20th after being ranked outside the top-31 by TSN and The Athletic and nobody–and that’s not hyperbole–had Yegor Chinakhov going one pick later to the Columbus Blue Jackets. Chinakhov was ranked 30th among European skaters and failed to be ranked inside TSN’s top 93 prospects available at the draft. The six-foot right wing was not selected at last summer’s entry draft, his first season of eligibility. Thus far, in 12 games in the KHL, playing for Omsk, he’s notched five goals and seven points. The Athletic’s Corey Pronman alluded to some ‘buzz’ around Chinakhov going somewhat early in the draft, but hard to imagine anyone saw a pre-25 overall trajectory.

First year GM, Tom Fitzgerald, whose pick of Mukhamadullin, was seen as a bit of a reach despite some presence of the Ufa blueliner within the top-40 of various rankings, acknowledged the player is a bit of an unknown outside the hockey world.

“Bit of an unknown maybe to a lot of people,” the Devils GM said. “Not in the hockey world. We felt that, the integrity of the list, that’s where we had him and felt extremely comfortable picking him.

“We do get a chance to watch him play. We liked him before the pause. When you see the jump there and see the qualities that he has–size, skating, puck-moving. Those are attributes you want in a defenseman. To me, he just grew on you the more you watched him. We were watching (Rodion) Amirov a lot. Every time you watch Amirov playing for Ufa, I just kept coming back saying ‘who’s the big kid–the mobile kid?’ I just thought the more you watched him, the more you think, why aren’t we talking about this kid more? We’re thrilled.”

It might be a bit of a stretch to rewind and categorize the Senators fifth overall pick, or lack of a trade for their second of two top-five picks, as a surprise, but it was certainly a point of conversation. Of course, the chance to select defenseman, Jake Sanderson seemed to be a good enough reason for Ottawa to hang on with their second of three picks, this one owned themselves.

“He’s a high-compete player, he’s someone that defends well, takes the body, high compete, but at the same time he’s underrated in what he brings offensively to the table. I think having a left side of (Thomas) Chabot, Sanderson and (Erik) Brannstrom down the road bodes a lot of success for our organization.”

And how surprised was the fifth overall pick?

“To be here and sitting in this position is pretty crazy and surreal,” the top American product selected on Tuesday said.

THE WHAT’S TO COME:

And lastly, we’ve arrived at the question of what is to come? And that just might be what fans, media and GMs are wondering as well. While teams will continue to meet throughout the late evening in war room’s across league cities, there’s a few prevailing questions I have myself. Among them: where might the market stand when the Draft resumes at 11:30AM EST. tomorrow? And, what might the impact of significant calendar events and deadlines upcoming have on transactions and activity? Tomorrow is the deadline for submitting qualifying offers to restricted free agents; free agency floodgates open at 12pm Friday and could be quite different without the interview period. And, might that impact more trade chatter?

But to be more specific here’s a few things to wonder early Wednesday morning.

More to come. Buckle up.