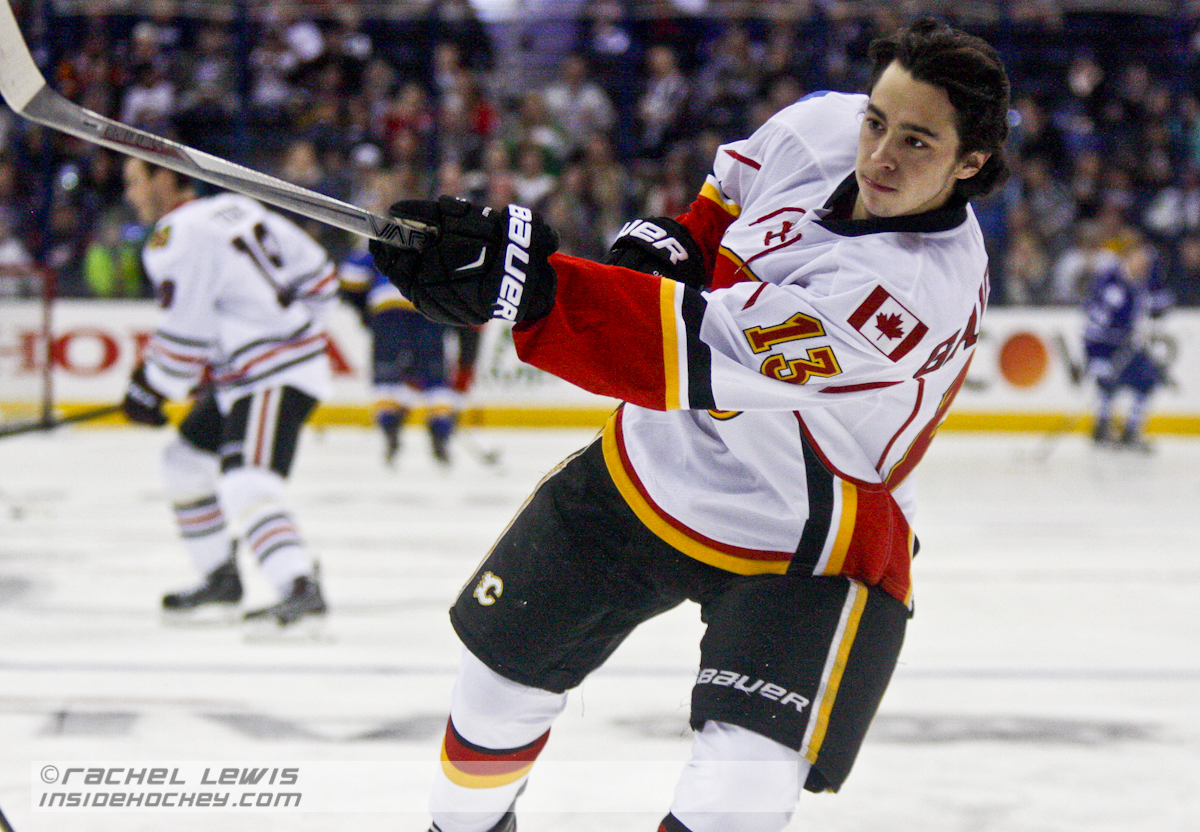 Johnny Gaudreau of the Calgary Flames.

NEW YORK – Thirty-five years ago, television broadcaster Al Michaels asked a question that’s become synonymous with hockey in America. The question had a major impact on the five rings of the 1980 Winter Olympics in upstate New York. The answer has left an indelible mark on the entire sport.

A group of largely-unknown college hockey players had just beaten the greatest hockey team in the world, putting American hockey on the map.

The growth continues to this day, especially at the increasingly-competitive collegiate hockey level, where the talent continues to improve.

“College hockey’s definitely getting better by the year,” said Swedish-born Rangers forward Carl Hagelin, who came to America to play for the University of Michigan from 2007-2011. “Hockey in the U.S. is growing, so you’re getting a lot of good players. It’s good for college hockey and it’s good for the NHL to get more American guys in there.”

Not only has the NHL welcomed more Americans into the league, they’ve featured ultra-talented players, like pint-sized Flames rookie Johnny Gaudreau who won college hockey’s greatest honor last year, the Hobey Baker Award, and is a likely finalist for the NHL’s Calder Trophy this year, awarded to the league’s top rookie.

There’s more on the way. This year, a trio of collegiate hockey players are ranked among the Top 6 North American draft prospects by the NHL’s Central Scouting Bureau. While the OHL’s Connor McDavid is expected to be the No. 1 overall pick in the 2015 Entry Draft, he could be followed by No. 2 prospect, Boston University center Jack Eichel and No. 3 prospect, Boston College defenseman Noah Hanifin. University of Michigan defenseman Zach Werenski is ranked as the No. 6 North American skater.

NHL general managers are taking note of the influx of talent, which could be among the best NCAA hockey has ever delivered to the NHL Draft.

“For a lot of guys, [playing college hockey] gives them a chance to mature, it gives them a chance to beef up physically,” said Rangers center Dominic Moore, who played for Harvard from 1999-2003. “You’re not playing as many games, you gain a little independence being in that environment. It’s a great development thing for a lot of guys. You’re seeing the results in the pros with the way they’re playing.”

While Canadian major juniors play a 68-game regular season, NCAA rules mandate just a 34-game campaign. By the end of the NCAA Tournament, the best teams will have played around 45 games.

That time away from the boisterous student sections has given players like Hayes a chance to spend more time in the weight room than his counterparts in Canada, helping him prepare for the rigors of professional hockey.

“College is a great route,” said Hayes, who was a first-round draft pick of the Blackhawks in 2010 before signing with the Rangers as a free agent this past summer after four years at Boston College. “You get four years of growing up, living on your own, lot of chances to get into the weight room. You don’t play as many games, but [you get] a lot of practices that are long and up-tempo. If you pick the right school and you’re in the right position on that team, it could turn out to be the best thing for you.”

The Rangers have been the beneficiaries of college hockey’s continued improvement. Their current 23-man roster includes 12 players with a collegiate background, including captain Ryan McDonagh (Wisconsin), top-line center Derek Stepan (Wisconsin), and alternate captain Martin St. Louis, who played for Vermont in the mid-90’s.

It’s not just the Rangers who have seen an influx of former college players. According to College Hockey Inc., last season saw an NHL-record 305 players – 31-percent of the league – with a college hockey background. That number was just 20-percent during the 1999-2000 season.

“College hockey, you’re playing against men,” Moore said. “Those guys are strong and fast. Obviously it’s a different game, there’s a lot of adjustment that needs to be made, but it’s definitely a great training ground.”

The college game has another significant difference from Juniors; a much more structured, defensive-minded game. The best collegiate teams are averaging fewer than four goals per game this season, while the highest-scoring team in Canadian juniors is hovering around five goals per game.

“If you played college, you’ve been through the process of playing strong defensively,” said Hagelin, who ranks fourth all-time on Michigan’s scoring list with 152 points. “You can see a lot of third and fourth liners in the NHL went the college route. Usually [when] you sign your deal you’re a bit older than a guy from Juniors, so you can throw a college guy right in there, he’s usually strong enough to play. Usually he knows the hard work it takes to become a pro.”

It’s one of the reasons so many former college hockey players have been able to jump right into the NHL and play defensively-responsible hockey. Hayes, who played for Boston College last season, made the Rangers out of training camp and has become a dependable third-line center with and without the puck.

“I think college is a great route,” Hayes said. “There’s pros and cons both ways. It’s definitely growing, I believe.”

Thirty-five years ago, a group of 20 college hockey players in Lake Placid, N.Y. believed in miracles. America has never stopped believing in the 35 years since.

Hayes scored the only goal in the Rangers’ (37-16-6) 1-0 win over the Flames (32-24-4) Tuesday night at Madison Square Garden after Derick Brassard forced a turnover on Dennis Wideman and made a cross-ice pass three minutes into the third period.

Cam Talbot had his fourth shutout of the season and seventh of his career in the win, stopping all 21 shots he faced. Two Rangers goaltenders have at least four shutouts in the same season for the first time since 1970-71 (Ed Giacomin & Gilles Villemure).

Rick Nash missed the game due to neck spasms, according to the Rangers. He’s day-to-day, and after the game Rangers coach Alain Vigneault said the issue occurred after his star winger woke up with a stiff neck. Oscar Lindberg, 23, made his NHL debut in Nash’s place, skating 8:18. He centered a line with Hagelin and J.T. Miller.