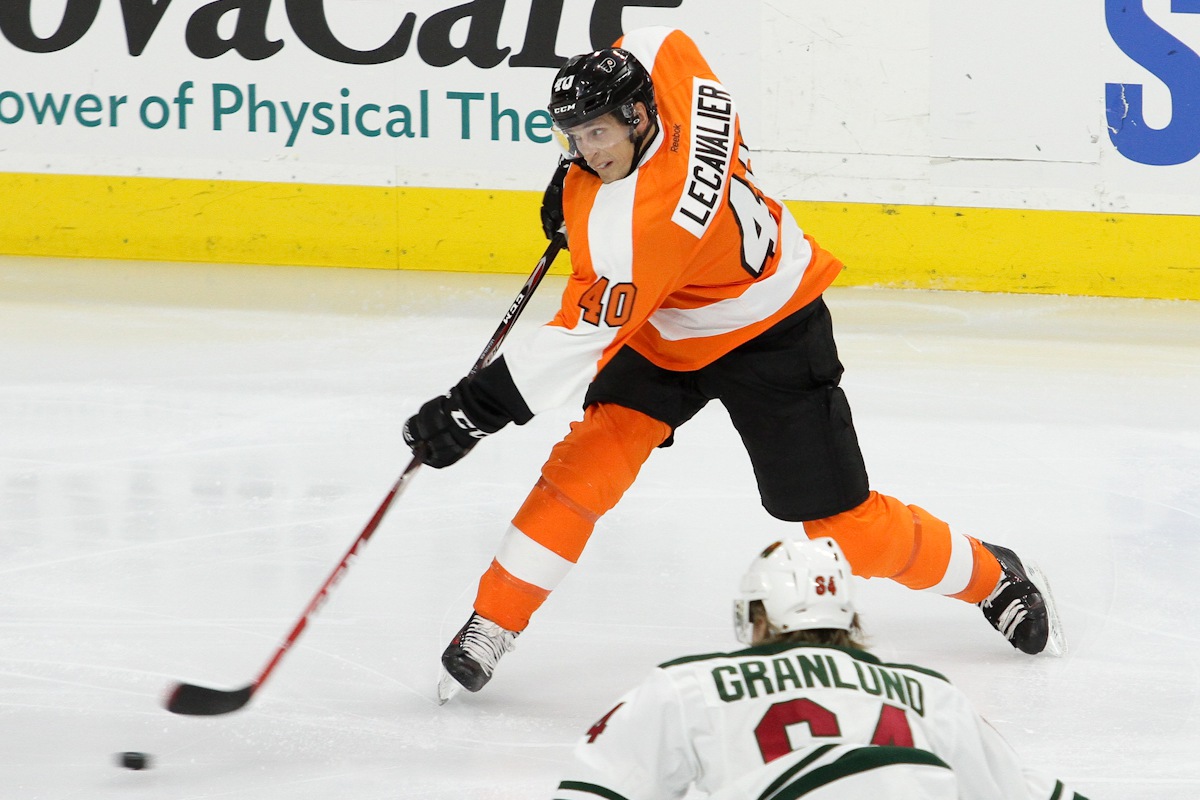 Center Vincent Lecavalier (#40) of the Philadelphia Flyers blasts a shot

I don’t know what Dean Lombardi got for Christmas, but it’s the time for new toys, so it’s perhaps not surprising that in the week after New Years’, he unwrapped a couple of good ones called Vincent Lecavalier and Luke Schenn. It wasn’t that the Kings didn’t need them, either.

The player perhaps more coveted of the two was Schenn, a defenseman who comes in in the absence of Matt Greene, who is now officially out for the year.

With needs on the blueline, the LA team has used and rotated through a number of guys in the past couple of months, with the presence of this new player allowing them to continue that. On Thursday night with Toronto in town, the team scratched Jamie McBain.

Over the past few weeks, the blueline has seen three guys in and out. McBain has been scratched now three of the last four. Christian Ehrhoff was the odd mad out for three games around Christmas time. Derek Forbort, who had been with the team since the early few games in the season, played five of the past six contests and didn’t dress more than sporadically before that, but he was dumped down to Ontario of the AHL with the newbie in town.

The other part of the deal is Vincent Lecavalier, who has a couple of years after this one left on his deal, but who has said he will retire after this season. That seems sensible, since he’s been around forever, right?

Surprise. This guy is only 35. If you would’ve asked me, I would have said pushing 40. Maybe that’s because his old line mate, Martin St. Louis, just retired, gray hair showing. But think about this: Dustin Brown is 31. Kopitar is 28. Lecavalier is thus in their demographic, rather than being the senior statesman that his longevity in the league would suggest him to be. Maybe the perception is created in part because he won the Stanley Cup so early on, back in 2004, as you good fans know.

His production has looked like this of late: He has played eight games to date this year, with one assist before Thursday and one on Thursday night in his LA debut. He is up to 1171 games total for the career, with 411 goals and 828 PIMs. He was, just to keep the history going, the first pick of the Lightning in 1998 and the first overall. This is his 17th NHL season. He has played, thus, nearly half his life in the NHL. Maybe that contributes to the sense of his being older than he is.

And where does he fit in the LA lineup? He was playing on Thursday night with Jordan Nolan and Michael Mersch, who is in his first NHL season with 13 games played now. He has a goal and an assist.

Fourth line duty. Is that enough for Lecavalier? In fact, he’s likely there only to break in, and he does, even watching from the distance of the press box, give the line a tall and imposing presence at center. Looking at the LA team down the middle in fact, is a pretty impressive sight. There’s Kopitar, Carter, Lewis, and Lecavalier. The Lewis in question is Trevor, and you might not feel like he’s an impressive figure, especially if you know that he’s only 199 pounds. He’s currently between Dustin Brown and Dwight King. Hmmm. Checking his numbers, I was thinking that I’d see stellar faceoff win stats, but even those are only OK. He’s often under 50% on a given night. Is this a spot where Lecavalier would offer an improvement.

Certainly Sutter trusts him in the early going. Lecavalier was often called upon to jump on the ice for defensive-zone faceoffs and then to jump right off again. When IH asked Coach Sutter about this after the game, he said, “We talked to him about Jeff [Carter] coming back [from five games injured] and Lewis not a natural centerman, and so he’s an experienced guy and we needed him to take faceoffs and then change, because we had trouble on faceoffs tonight quite honestly.

Did they ever. The Kings were at 43% on the evening. Lecavalier, though was 6-7, or 46%. Carter was 4-1 on draws, incidentally, so I’m not quite sure how Sutter’s comment should be read.

But the new center’s real influence was felt on the Kings’ first goal. He held the puck in at the left boards, lost it in his feet, got it back, and fired it to the point. Muzzin moved in and put a wrister high and far side over the goalie’s shoulder.

He said of his assist, “I was just trying to hold the puck at first, get that body position. I saw him kind of creep in, so I, it was a great shot, right in the top corner. He missed one I think in the second period, so he made sure to put that one inside the post. It was a really nice shot.”

As for Schenn, he is wearing 52 (two of his former numbers, 5 and 2, combined, since 2 belongs to Matt Greene and 5 to McBain, whose job, at least on this night, Schenn was stealing). He played on Thursday night with Christian Ehrhoff. Both players were welcomed to the team by PA announcer Dave Joseph in an early break in play. The fans cheered.

In period one, he was somewhat tentative, at times asking the forwards where to position himself on faceoffs. Natural, since he hasn’t played the Kings’ game before.

By period two, he was much more involved, being trusted by the Kopitar line, for example, in helping with the breakout. Schenn had the puck, made a short pass ahead to Kopitar, then skated behind him and accepted a dump pass. He then advanced it through the neutral zone and into the Toronto end.

He took a penalty late in the second frame for boarding, and when he got out of the box, a puck came to him at center. He burst down the left side of the ice, a defenseman of the Toronto squad skating on an angle to cut him off. He got off a blistering wrister, albeit a shot that was unlikely to beat a goalie like James Reimer, and then skated to the crease to see if the puck might drop. There was a little scrum, and he had words with Dion Phaneuf as both skated to their benches. He was involved, in other words.

In period three, he was instrumental when the Leafs, who pulled their goalie with three minutes remaining, pressed. Schenn dove to swat a puck out of the goal area with about six or seven seconds to go. He cleared another one to the board with a few seconds on the clock.

The game itself saw the Kings nearly double the Leafs in shots over the first two periods. Neither goalie had to make a fantastic save, but each did some nice work with the blocker at various times. The Leafs were not tentative early, but not dominant by any means, but as period two wound down, they came on, as if they realized they could play with LA.

The Leafs are definitely not the unsure, underskilled-and-they-know-it team that they were a year ago. Babcock’s message as reported in the Toronto papers when I was up there last week is simple: do things right every time, and let the results take you where they will. It’s working, though they were ultimately on the losing end of a 2-1 score versus LA.

The Leafs had every excuse to sit back. They played a day before in Anaheim. They won the game in Anaheim. They beat St. Louis before that. Heck, they were making hay on a Western trip that has done in many better teams already this year.

Goals were scored by Muzzin and Carter for LA and answered only by Peter Holland on the TO side.

Notes
You can read my books, Facing Wayne Gretzky being the newest. I mean, if you want to.