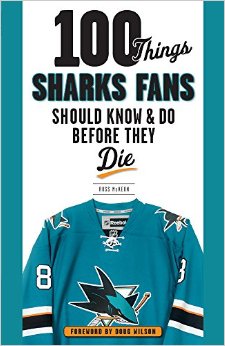 Ross McKeon’s “100 Things Sharks Fans Should Know & Do Before They Die” takes a look at the greatest moments in San Jose Sharks history from the team’s humble beginnings as an expansion franchise to last season’s exciting ride to the Stanley Cup Final.

McKeon is the perfect choice to write this book as he’s covered the Sharks from the beginning. He captures not only the moments themselves but the atmosphere that surrounded each great moment and personality described.

The book features everything Sharks fans need to know about the franchise starting with the first two seasons at the vintage Cow Palace in Daly City, traditions such as team skating out of a shark’s jaws before each game or how the legendary Gordie Howe helped model the team’s uniforms before the team ever played a game.

The Sharks had a unique founding. No other team came into the NHL like the San Jose, and the book covers the complex backstory of the franchise’s founders, George and Gordon Gund and how NHL hockey returned to the Bay Area after the departure of the California Golden Seals in 1976.

Of course the greatest players in Sharks history are recalled here. Patrick Marleau, Owen Nolan, Mike Vernon, Jonathan Cheechoo and other stars are recalled along with their greatest moments. Players like Mike Ricci, never a star, but always a popular and hard working player are also highlighted as are colorful characters like Evgeni Nabokov. The little-known story of how Wayne Gretzky almost joined the Sharks is also recounted.

McKeon also touches on the greatest moments in franchise history like Jamie Baker’s goal late in the third period of Game 7 in the 1994 playoffs that helped the Sharks upset the Detroit Red Wings and gave San Jose its first playoff series win. Owen Nolan’s called shot in the All-Star Game and the team’s heroic run to the Stanley Cup Final last spring also get highlighted.

Great trades like the one that brought Joe Thronton to Team Teal and the infamous fight between Link Gaetz and Bob Probert are also described in depth and detail.

Some extraordinary low points are also recalled including an historic 13-1 loss to the Calgary Flames at the Saddledome back in 1992-93. The memory serves as a reminder of how far the team has come since its expansion days.

Longtime Sharks’ broadcasters Dan Rusanowsky and Randy Hahn also get their due in the book as McKeon describes their greatest calls, memories and their place in franchise history.

If you’re looking for the perfect holiday gift for the San Jose Sharks fan on your list, look no further than “100 Things Sharks Fans Should Know & Do Before They Die.” The greatest players, moments and memories of the Bay Area’s hockey team are presented in style and fans will return to this book again and again.