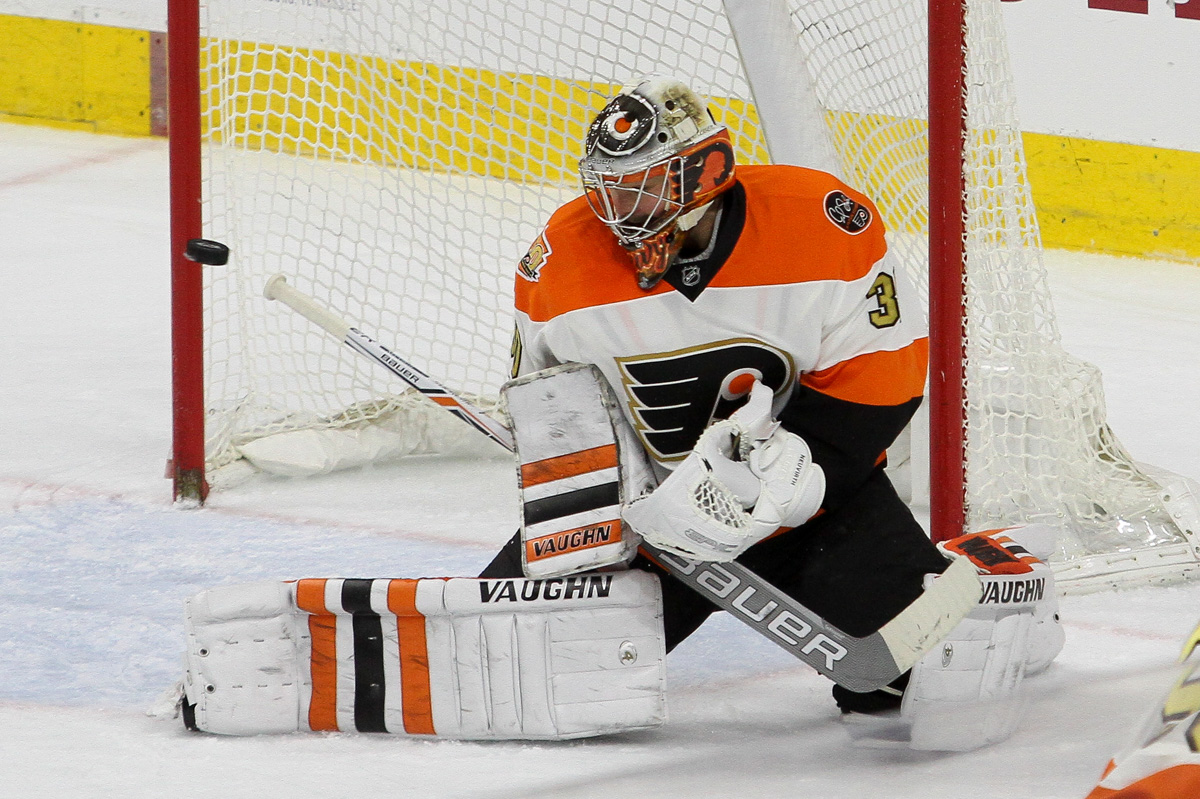 On arguably the biggest sports weekend of the entire year, the Flyers performance in this afternoon’s game against the Kings left its fan’s feeling a little… deflated.

After going 4-1 in its last 5 games, the Flyers offense failed to show up today as it lost to the Los Angeles Kings in overtime 1-0. Former Flyer Jeff Carter scored the game’s lone goal for the Kings giving him his league-high ninth game-winning goal and 27th of the season, second in the League to Sidney Crosby (28) of the Pittsburgh Penguins.

The Flyers were outshot 28-17 in this game. Even though Michal Neuvirth took the loss in net, without his stellar performance, the score could have been much more lopsided. The save of the game, and possibly of the year, came at 7:55 of the second period. Kings’ RW Dustin Brown was all alone in front of the net, faked left and went right trying to sneak the puck around Neuvirth’s glove side. Neuvirth was able to recover just in time and snagged the puck in his glove with full extension to deny Brown the goal.

Neuvirth made a similar save again on King’s LW Tanner Pearson late in the third period to keep the game scoreless. Neuvirth was asked if this game was bittersweet for him as it came in a loss but probably his best performance of the year:

“Yeah, it felt good but, we only got one point so I am not happy about it, it’s tough,” he said. “You know, I feel really good, I see the puck well.”

Neuvirth was also asked about his highlight-reel making save against Dustin Brown:

“It kind of happened quick, it caught me off guard a little bit,” he said. “I just stayed with it, had my eye on it the whole time and it was a big save for us.”

The Flyers were once again without defenseman Shayne Gostisbehere and LW Travis Konecny for the second straight game as healthy scratches.

Gostisbehere, who took the Flyers by storm last season with an offensive eruption as a first-year NHL defenseman, has only 4 goals and 17 assists this season and is currently on a 27-game goal scoring drought. The 2015-16 Calder Trophy (top rookie) runner-up says offense is the last thing on his mind right now:

“I’m more focused on defense first. I can care less about points,” Gostisbehere said. “The offensive will come, it’s something I’ve always had. I know it’s going to come, it’s just a matter of time. The defensive side of things, that’s all my focus right now — just being a sound, two-way player.”

Flyers’ head coach Dave Hakstol was asked about his decision to bench two of his younger players and his response, although vague, is a telling sign that the two are simply going through some NHL growing pains:

After today’s loss, the Flyers still hold the 2nd Wild Card spot in the Eastern Conference with a 26-20-7 record. It will look rebound on Monday night when the Blues come to Philadelphia. The puck drops at 7pm.