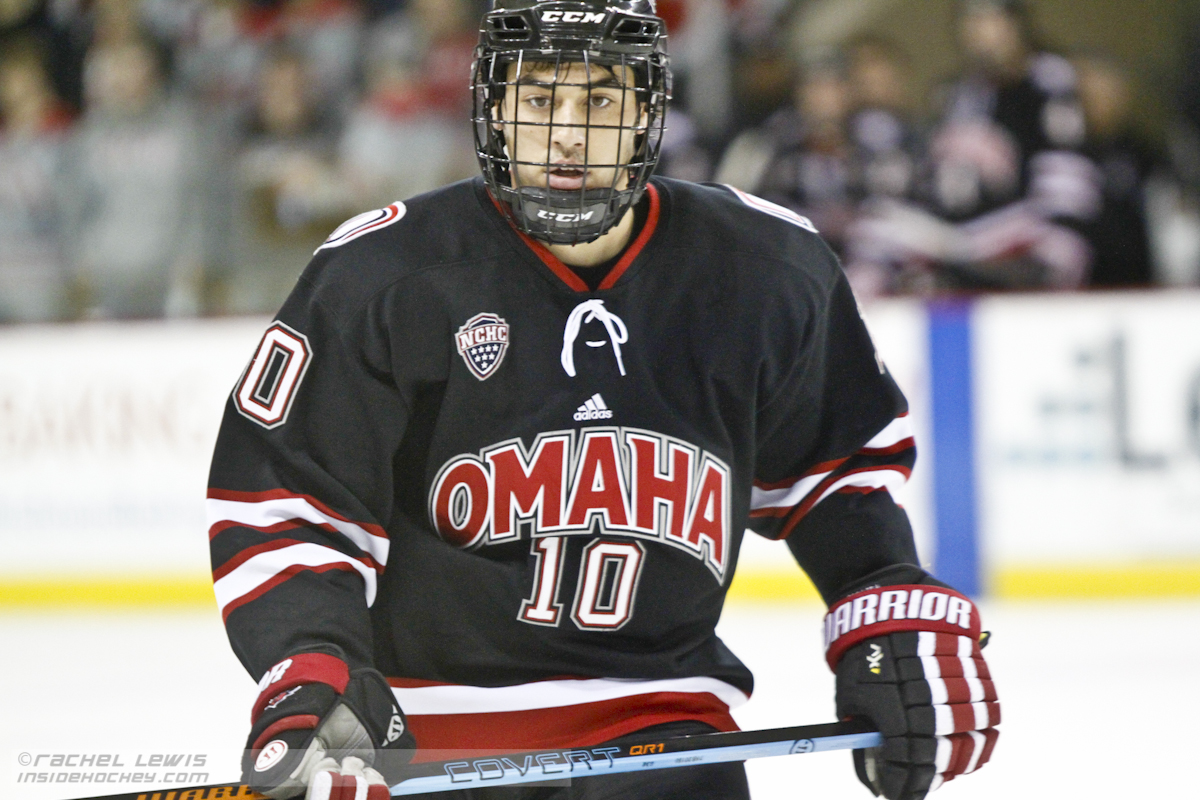 Welcome to the National Collegiate Hockey Conference Power Rankings. Three of us will be doing the weekly NCHC Power Rankings during the 2014-15 season.

This past weekend, the University of North Dakota took four-of-six points (4-2 W, 3-3 Tie) from the Denver Pioneers at home.

With about 4:12 remaining in the game, UND thought senior forward Brendan O’Donnell had scored the go-ahead goal. Video in the press box confirmed that the puck was clearly in the net. For some reason, the on-ice officials couldn’t find any video to confirm that the puck was in the net. UND would lose in the shootout 1-0.

Fun fact: Last season, UND did not compete in a single shootout. Not so fun stat: This season, UND has been in two shootouts and is 0-2.  They haven’t scored a goal in two shutouts.

This week, UND travels to Kalamazoo, Michigan, to play the Western Michigan Broncos.

This week, the RedHawks entertain the Minnesota-Duluth Bulldogs in Oxford.

This past weekend, the Nebraska-Omaha Mavericks split (1-2 L, 3-1 W) their series with the Western Michigan Broncos in Omaha.

This weekend, the Mavericks travel to St. Cloud to take on the Huskies.

This past weekend, the Minnesota-Duluth Bulldogs split (4-2 W, 1-4 L) their weekend series with the St. Cloud State Huskies. The Bulldogs broke a four-game winning streak with the loss on Saturday.

This weekend, the Bulldogs travel to Oxford, Ohio, to play the Miami RedHawks.

This past weekend, the Denver Pioneers took two points (2-4 L, 3-3 T) from UND. Denver won the shootout on Saturday night 1-0.

This weekend, the Pioneers play a home-and-home series with their cross-state rivals.

This past weekend, the St. Cloud State Huskies split (2-4 L, 4-1 W) their weekend series with the Minnesota-Duluth Bulldogs.

This week, the Huskies entertain the Nebraska-Omaha Mavericks. Earlier in the season, the Mavericks swept the Huskies in Omaha. The Huskies are going to be looking for some revenge this weekend.

This past weekend, the Western Michigan Bronco split (2-1 W, 1-3 L) their series against the Nebraska-Omaha Mavericks.

This week, the Broncos entertain UND in Kalamazoo, Michigan. The two teams have yet to meet this season.

Last weekend, the Colorado College Tigers were swept (1-3 L, 1-2 L) by the Miami RedHawks in the Colorado Springs. The Tigers have lost eight straight games and have been outscored by the opposition 9 – 32.

This week, the Tigers take on the Denver Pioneers in a home-and-homes series.

After a hard fought weekend against Denver, and a Friday night where they controlled a good portion of the game, look for North Dakota to give a pesky Western Michigan squad a hard time when they invade their barn this weekend. With Drake Caggiula putting on yet another highlight goal and the rest of the team scoring by committee, this should be a fun series to watch this coming weekend.

Miami looked impressive this past weekend in a low scoring sweep in Colorado Springs. The sweep helped propel them into a three-way tie with North Dakota and Omaha for first place in the standings. With just three weeks remaining, their final series at home against North Dakota just made things much more interesting if things hold up as they are.

A split is not what Omaha needed this weekend, but with UND and Denver skating to a tie, their Saturday victory over Western Michigan was enough to keep them in a tie for first place in the NCHC standings. However, going on the road and getting six points in St. Cloud is no easy task. Austin Ortega needs to keep scoring those important goals if Omaha is going to keep rolling.

A split is not what the Bulldogs would have liked to have had this weekend at home against St. Cloud, but that’s exactly what they got. Giving up three third-period goals Saturday night is something that needs to be changed if Duluth hopes to make a decent playoff run.

The Pioneers were able to salvage two points on Saturday night after losing Friday night at the Ralph. A late third period comeback effort sent the game to free hockey where they would pick up the extra NCHC point by winning the shootout. Next up is a home and home with Colorado College and needing the points to try and get home ice for the first round, this series couldn’t have come at a much better time. Denver just better not overlook CC, or they may get the short end of that stick.

A road split with Duluth is gaining this team more confidence as the season is coming to a close. Look for this team to find a way to sneak into the Frozen Faceoff four weeks from now.

With splitting with Omaha on the road last weekend, Western Michigan showed the league that they could very well show back up in Minneapolis in March. However, this weekend doesn’t get any easier for the Broncos as number 1 North Dakota rolls into town for their only meeting of the regular season.

It looks like the tigers will be the only 20 loss team this season and the only ones without 10 victories, in the NCHC. A very disappointing year indeed for the Tigers as they look to finish off the in-state rivalry with Denver as they have another home and home series this weekend.

North Dakota looked strong for large portions of the weekend against Denver, but came out slow in the third period on Saturday.  That few minute stretch in the final period of regulation in the series proved costly, as Denver mounted a comeback and tied the game.  The Pioneers ultimately earned the shootout victory to salvage 2 points on the weekend.  The Sioux have shown they have the team and talent to win a national championship this season, but slip ups like that could prove costly for their national title hopes.  North Dakota will look to rebound next weekend as the Sioux travel to Kalamazoo to take on Western Michigan.

Miami did what they needed to this weekend, sweeping Colorado College.  While both games were close, Miami showed their resilience holding off the hard-charging Tigers in Colorado Springs.  The sweep vaulted Miami up into a three-way tie with North Dakota and Nebraska-Omaha for the point lead in the NCHC.  However, of the three teams knotted atop the standings, Miami may have the most difficult final stretch, as the RedHawks square off against Minnesota Duluth, Denver, and finish the season hosting North Dakota.  Miami will play host to the Bulldogs this upcoming weekend.

The Mavericks let points slip away this weekend, as they dropped the series opener on Friday to visiting Western Michigan.  Fortunately for UNO fans, they responded well and took control on Saturday en route to a solid 3-1 victory.  Ryan Massa has the ability to take this team far, but he needs to get some more help from a talented, albeit young, group of forwards.  Omaha heads on the road for the next two weekends, as they travel to St. Cloud State this upcoming weekend, before going up to Duluth to take on the Bulldogs the following weekend.  As the race for the conference championship heats up, if Omaha can maintain their spot over the next two weekends, they will have the upper hand as they host Colorado College in the final weekend of the NCHC regular season play.

Duluth took on in-state rival St. Cloud State this weekend and put in a strong performance in earning 3 points on Friday.  Unfortunately for Scott Sandelin’s squad, the Bulldogs were unable to tame the Huskies on Saturday, and came away with a series split.  Duluth sits 4 points behind the triumvirate of North Dakota, Miami, and Omaha, but Duluth still holds some of their own destiny, as the Bulldogs play at Miami this upcoming weekend before hosting Omaha the following weekend.  If Minnesota Duluth can pick up some points against those teams, and hope that North Dakota falters a bit, the Bulldogs could find themselves in the race for the Penrose Cup heading into the last weekend.  At the very least, UMD is solidly in an NCAA Tournament position at the moment.

Denver competed hard for David Carle, as head coach Jim Montgomery missed the series up in North Dakota after the passing of his father.  In difficult circumstances, in a difficult environment, and against arguably the league’s most difficult team, it would have been completely understandable if the Pioneers would have let down on Saturday going into the third period down two goals.  However, DU stormed out of the gates and quickly tied the game.  Denver had chances to split the series, including a near miss with a second left in overtime.  The Pioneers at least left with 2 points, which could come in extremely handy in their race for home ice.  The Pioneers play a home and home series with in-state rival Colorado College this upcoming weekend.

Western earned an important split against Nebraska-Omaha as the Broncos maintain hopes for positioning themselves in the NCAA Tournament discussion.  Western Michigan will have their opportunities to earn both conference points and jump up in the pairwise over the next three weekends as the Broncos square off against North Dakota at home this upcoming weekend.  Following that series, Western will travel to Colorado College before returning home to host Minnesota-Duluth.

The Huskies have come on strong over the last few weeks, winning 3 of their last 4.  That has vaulted St. Cloud into the NCAA Tournament picture, as SCSU sits just outside the Tournament at the moment.  St. Cloud will host Omaha this upcoming weekend in a key series for both teams.  The Huskies follow that up with a trip to Grand Forks to take on North Dakota.  If St. Cloud can win 3 of those 4 games, it is likely that they will be on the right side of the bubble heading into their final regular season series against Denver.  Home ice is probably out of the equation for St. Cloud at this point, but the Huskies are certainly within reach of making a run at an NCAA Tournament bid.

Once again, Colorado College hustled and worked extremely hard for 120 minutes of action.  Unfortunately, once again, the Tigers drew the short stick when it came to winning the games, as CC dropped a pair of close contests against Miami at home this past weekend.  The Tigers will finish in last place in the league, but CC will not be an easy first round matchup for whoever wins the league.  Colorado College will look to play spoiler this upcoming weekend against arch-rival Denver in NCHC play.