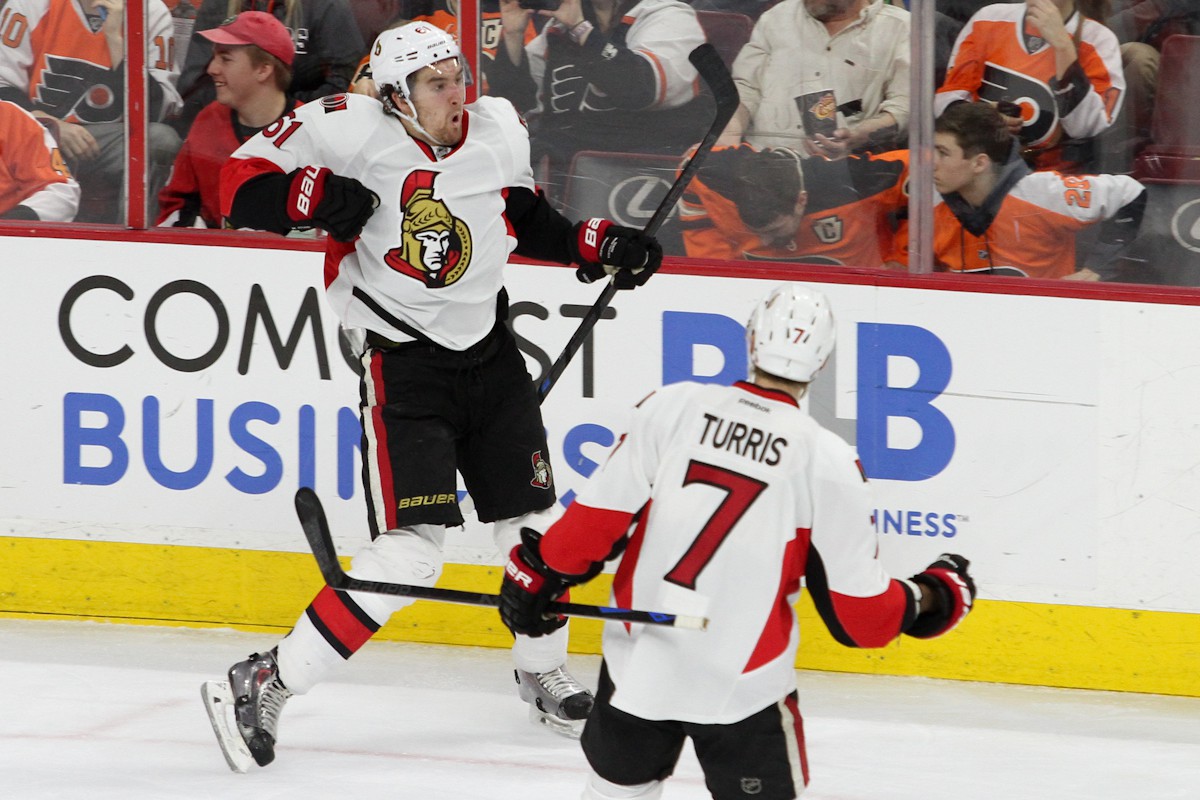 Nasty. That’s how things started Saturday afternoon in Los Angeles. Ottawa, by most accounts a rather docile team, came out hard, with Mark Borowiecki slamming Tyler Toffoli into the boards in the LA end and earning a five-minute major for his trouble. The Kings got two goals on the five-minute power play that resulted, both coming with a modicum of luck.

The first one saw Carter essentially give away a puck to the Ottawa defense, then get it back when the Sens’ defenseman whacked it backwards—towards his own net. Greene swept around him, picked up the puck, and had practically enough time for his afternoon nap as he went in on goal. He shot up and over the netminder. An assist went to Doughty on the play, and another one was added later to Budaj.

The second goal was another semi-lucky one. The puck was slapped from the point by Martinez. It was blocker-saved by goalie Condon, and bounced up high. He didn’t know where it was, and it came down and grazed him on the back as he backed toward the cage and in.

Make that nasty and ugly.

And then it got nasty again. On the shift after the Ottawa D-man got out of the box, he was lined up at the left hashmark on a faceoff when, right as the puck was dropped, Matt Greene fought him. It was obviously mutual.

At the end of that, Greene slammed Borowiecki’s head into the ice. But it was Greene who got up and went to the box with a bloody forehead.

But here’s a question. Why was Borowiecki down there on a faceoff? Was Boucher wanting to send him out to take his punishment? Had the challenge already been issued by the Kings? It would seem hard to believe that the Ottawa coach would send his own guy out to the slaughter. But since when does a defenseman line up at the left hashmark on a faceoff in the offensive zone? Maybe it’s just the code–he knew he’d have to pay, so why not just get to it?

He explained after the game, “It’s a penalty for sure. You’re a player that plays on the edge, and you’re going to go over it. You’re never looking to hurt people, but you play hard, you get a little over-excited, and that’s the case.” He went on to say again that he never meant to hurt anyone, but “you look at anyone who plays my brand of hockey, and there’s going to be a couple of those every season.”

OK, that’s just crap. You can play otherwise, and the league should step in and make sure you learn that lesson. He had no comment on the fight itself.

It stayed ugly. Jordan Nolan put a perfectly clean hit on Bobby Ryan after the latter dished a puck out at the boards. The hit was side-to-side, shoulder-to-shoulder. But Chris Neil came over and fought Nolan. He would later say, “It was just my turn up. It was a clean hit, but I’m not going to let that happen to one of my skilled players.” This, too, is pure nonsense. Completely clean hit. This thing was shaping up to last a long, long time.

But nothing much of note happened the rest of the period, and the Kings exited with a 2-0 lead. The shots were 8-8, and the Kings won the faceoff battle at 57%.

Good thing, after their coach had described their play on Thursday night versus Carolina as “horseshit.” He had also done some switching up to see what he could shake up. Nic Dowd and Kyle Clifford were sitting. Andy Andreoff, who had been out for a month and 15 games with a hand injury, was back. He didn’t do himself any favors by taking a roughing penalty with eight minutes gone in period one. And the other addition, or re-addition, was Devin Setoguchi, back in after being out for three games.

The lines were going to be switched up from what they were Thursday, and we got a glimpse of this as the game started, but that was all thrown off by the five-minute power play issued on the hit at 2:38.

The second period went more to form as far as LA went, in two ways: one, they went back to some steady line combos; two, they played sloppy defense and let Ottawa score and early goal. That came when Muzzin tried to clear a puck up the middle and had an Ottawa player bat it down and back into the zone. The play turned into a three-on-two, and Tom Pyatt put the puck to the front, where Muzzin, again, was sloppy in covering his man, who redirected it into the net. The goal was credited to Pageau but later changed to Zach Smith.

The lines had perhaps one surprise: with Kopitar and Gaborik was Brown. In the first period, Trevor Lewis had been flanking the two speedsters. At that time, Brown was playing with Setoguchi and Andreoff. In period two, those two had Pearson with them. But they soon got Brown back. The fourth line was the familiar King, Nolan, and Nick Shore. Don’t forget I said “Brown,” though, as he’s shortly to figure in the action in a meaningful way.

So next—surprise—Sutter put out Kopitar, Lewis, and Brown. In fact, Brown was double-shifted. What? The Kings were giving the puck away at every turn, and rarely in the Ottawa zone. With about a minute left, they had but four shots to Ottawa’s nine in the period.

The line that followed that one was King-Shore-Nolan. And at the end of the period, they essentially traded shifts with Brown-Kopitar-Lewis. The Carter line and Gaborik, in particular, were stapled to the bench.

Guess what? Sutter’s switcheroo and double-shifting worked. With 20.8 seconds left in the period, Doughty got the puck at his blue line. He whirled and waited, appearing content to rag it out and end the frame. But he advanced it, and in the Ottawa zone, Brown forced it free at the right hashmark. He winged it around the net to the left point for Forbert, who fired from there. The puck hit someone in front and came to Lewis at the right of the cage. The yawning, empty cage. He shot; Condon got a glove over. It was not enough, as the puck went in under the hand. 3-1 and the shots at 5 for the period LA, 9 Ottawa.

A goal apiece—not at all a fair result given how bad the Kings had been, and how unsure with the puck. But the two-goal lead was preserved. But to the above “nasty” and “ugly,” let’s add “sloppy.”

Would we get another adjective in period three?

It would be “entertaining, if fragmented.” The Kings had an early penalty. Then another. Then the Senators had one. Nobody scored until the very end of the last of the three, when Gaborik came off the wall with a puck and flung it up and over the goalie with about seven seconds left in the Kings’ PP. Ottawa managed just three shots in the period, not a recommended way to tie or win a game.

Afterwards, the Ottawa coach, Boucher, said, “We put ourselves in a hole right off the bat, but we’ve had success coming back. . . . I think the biggest deflator was the end of the second period there. We dominated the second period; we were all over them, and we played great. The guys believed we could come back . . . but that goal, that shouldn’t happen. If that doesn’t happen, we’re one goal behind, we’re digging, and we’re looking good.”

The Kings celebrated before a sellout crowd and now head on the road for almost the rest of the month. The Sens head to Anaheim for another 1pm game, Sunday.

Mike Murphy was honored at center ice as the Kings’ fiftieth anniversary celebrations continued. Murphy played ten of his 12 years in the NHL with the Kings, rising to Captain. He scored nearly 250 goals in 831 total NHL games. His best year was 1974-75, when he had 30 goals and 38 assists in 78 games for LA.

Murphy also played and coached at the same time—he was the player-coach of the team during the 1986-88 era. Not “a” coach. The Head Coach. Imagine that today? He would later go on to be the coach of the Maple Leafs.

Follow me on twitter @growinguphockey. Read my books. They’re easy to find. “Brian Kennedy hockey” in your favorite search engine should do it.