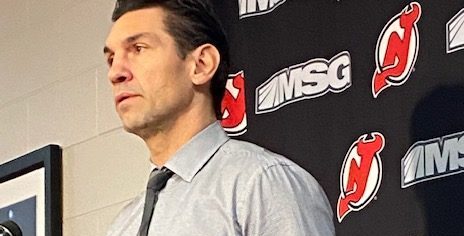 Nasreddine Satisfied with Effort For Now

NEWARK–It’s been two games under interim head coach, Alain Nasreddine, and twice the Devils have lost in spite of a quality effort. That much, at least for the time being, should be comforting. And to his credit, the head coaching veteran of 125 minutes of NHL recorded play seems happy with the brick-by-brick approach it might take to get this team back in the right direction.

After building momentum on two prior opportunities on the power play, the 13:31 Taylor Hall goal put the Devils in front 1-0 and gave Hall his second power play goal on the season and first at home. Patrick Kane drew the Blackhawks first power play 8:19 into the second and subsequently fed Alex DeBrincat just over a minute later to even the game’s score.

A late third period opportunity in a defensively sound period for the Devils, was a chance to try and get an elusive win at home. Unable to secure it or another goal in regulation or the three-minute overtime, the two sides traded goals in the shootout. Which culminated in the battle of 2019 draftee’s, Kirby Dach-goal and Jack Hughes-save, to end the evening. It was, a disappointing result  on a game that saw enough done right.

“All we’re looking for is to take another step in the right direction,” he said. “I’ll take the effort. For the most part, we played the way we wanted to play and we’ll take it. Would have been nice to get two points, but we’ll take it.”

Such is the demeanor that should be afforded to him, just days after assuming head coaching duties via assistant coach status with the team. The clean-up of this team is now, in part, his job. So one does have to wonder when quality efforts combined with another defeat will start to chip away at the calming presence that Nasreddine seems to be, according to his players.

“He’s not one for big speeches, he’s real simple,” Damon Severson said. “Comes in the room, if he sees something out there during the game, he’ll let us know. He’s not a yeller or screamer, I think the guys will be the first one to tell you that. He comes in in a calm manner, he talks to you like a human being and he treats us all like professionals. He knows we’re capable of being real successful out there.”

In light of the recent discussion surrounding current and recent coaches at the NHL level using tactics and displaying antics that are inappropriate in the professional setting, the emphasis has been placed on treating players like professionals–and praising coaches who have found success in doing so. Not unlike John Hynes in his four-plus years as head coach, Nasreddine has his room’s respect and has reciprocated it back. And even amidst the struggles, that never seemed to be an issue with the club.

The team will continue to strive for quality efforts and some winning results along the way. But it’s been hard to come by, the Devils winning two of their last nine. Friday’s shootout loss was the sixth one-goal loss in 28 games this season. That much can be a source of frustration to even the most calming bench boss. But it’s the mess he’s inherited now and Nasreddine, should he finish the season, will likely have more unfulfilling contests ahead. Even if effort is there.