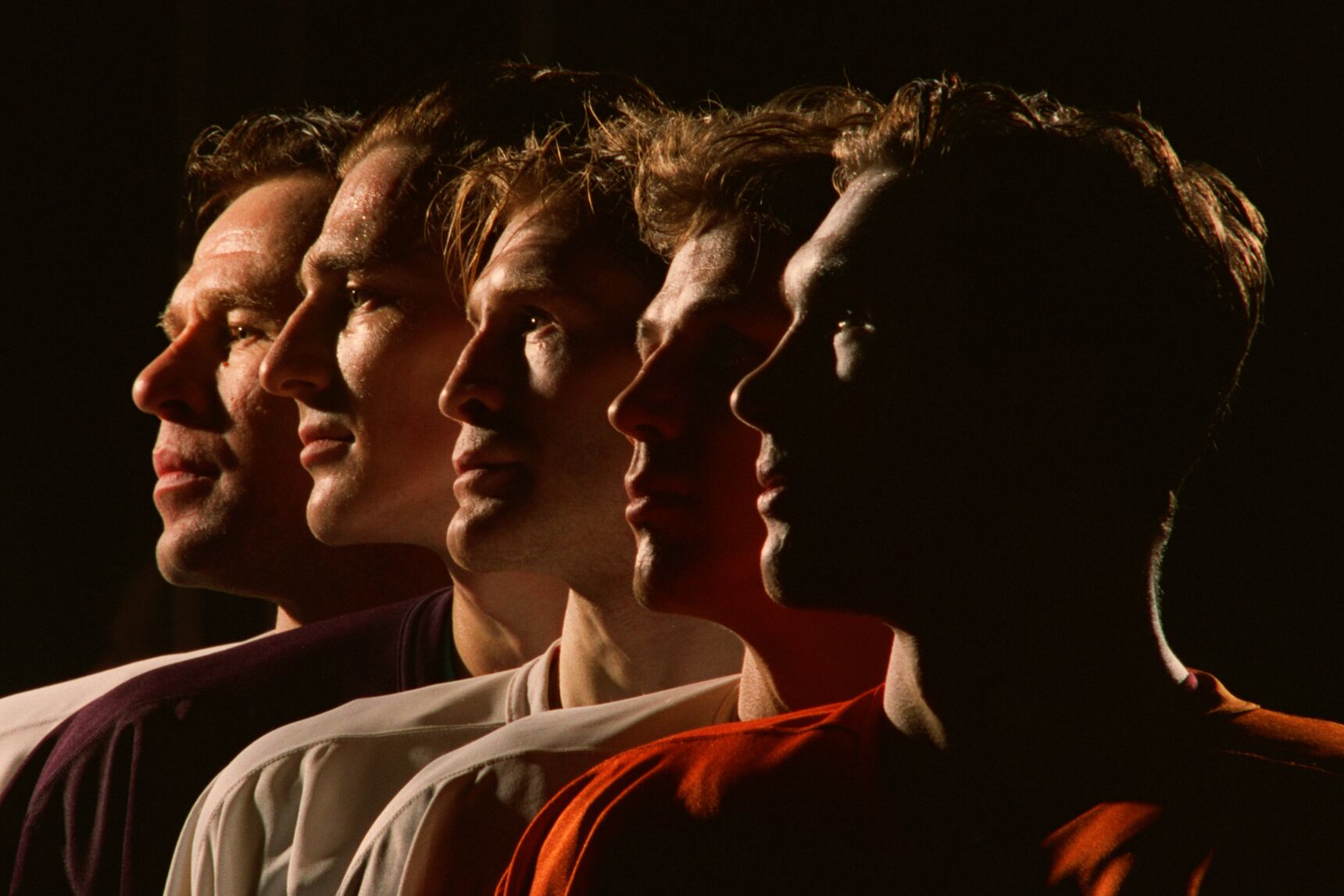 KG: That was a fun watch, many neat memories. It was really cool seeing the gradual construction of that Russian Five unit – from Fedorov through Larionov – and also to see how much influence they had on the other Wings players. Scotty Bowman was probably the perfect coach to bring it all together.

DHS: Hands down the best hockey movie I have seen since “Miracle”.  The true story of five outstanding Russian hockey players who not only revitalized a once-proud franchise that had fallen on terrible fortunes but changed the way hockey would be played in North America forever.  Back in the 1980s, the Iron Curtain was still very much part of the geopolitical landscape. Back then it was unthinkable that things would ever change but the Red Wings franchise – with little to lose – took a big gamble that maybe they could maneuver around the Iron Curtain.  What follows is a story in the finest John le Carre tradition. A tale of satchels of money, political defections, flashy Corvettes and ultimately Stanley Cup glory. Long rumored, this movie at last sets the record straight on how the Red Wings pulled off the hockey caper of the century.  Fans of all ages will enjoy this wonderful documentary.

KG: It’s cool to think about how quickly things changed, from the Soviets being viewed as this almost-alien population to them becoming intrinsic to the NHL. Fedorov was drafted in 1989 and he defected one year later. By the mid-1990s, it was routine for Cup champions to feature Russian players. It’s really funny to imagine Fedorov learning about American culture in a suburban shopping mall… almost like a real-life Bill & Ted-type adventure, happening only a year after that film was released.

DHS: One aspect that I would have liked to have heard more about in the movie is the on-ice rough treatment and xenophobia that the players faced.  Similar to Branch Rickey’s late 40’s introduction of African-American players in the previously all-white world of professional baseball, these five had to endure some pretty unsavory treatment by their peers and the media.  The brief segment on Don Cherry’s early views on the Russian hockey player, in general, is particularly cringe-worthy, and his rabid nationalism would not have been acceptable today. I believe a lot of credit is due Scotty Bowman for getting the best out of these players despite the hardships they had to endure.  Like Jackie Robinson, decades before the Russian Five rose above their detractors and would forever change the game.

KG: Absolutely. In the book, they go into a bit more detail about how the refs even looked the other way when Russian players were targeted for abuse. Players like Fetisov didn’t feel welcomed in their own locker rooms in many cases, because they were seen as “taking jobs” from North American players.

DHS:The “taking jobs” argument was very similar to ones used during baseball’s integration and mirrored the rise of the French-Canadian hockey player decades earlier, in the end, it was about winning games, and the Red Wings started to win a lot of games.  It was ultimately this success on the ice that began to change long held but now outdated society bigotry.

KG: Of course, on one side you had fans complaining about expansion “diluting the talent” and on the other, you had North American xenophobes complaining about former-Soviet players taking jobs. In reality, the two balanced each other nearly perfectly, with an increase in American-born talent making up the difference.  Where the Wings were concerned, you had a captain and leader in Steve Yzerman identifying from the start that Sergei Fedorov was a better player. That leadership set a tone that made Detroit a welcoming place for Russian players. 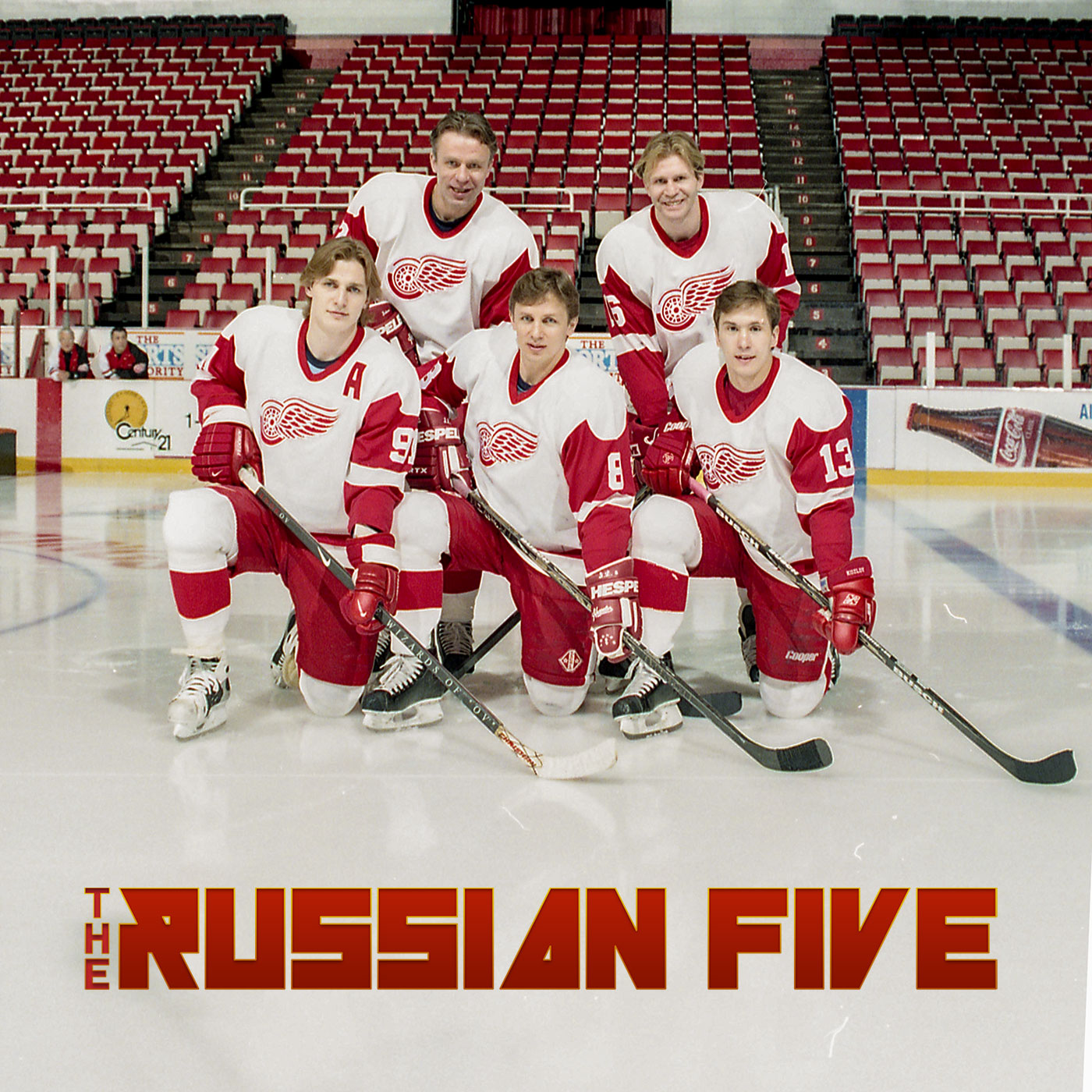 DHS: Yzerman and the guiding hands of Mr. and Mrs. Ilitch on the ownership level played a huge role without their support this grand experiment would never have been a success it became.

KG: Agreed completely. The Wings were all-in with Europeans – and with Russians in particular – and the results were incontrovertible.

DHS: It was a perfect storm and like the fierce rivalry between the Colorado Avalanche and Detroit Red Wings from the mid-1990s through the early 2000s.  Few millennials would believe those violent clashes if it wasn’t for YouTube.

KG: I still can’t believe just how violent the rivalry was, and I watched it unfold in real time!

DHS: How different the era was! Every night between the two rivals was like a proxy battle of the old Cold War.  But they also played very high-quality hockey, combining for five Stanley Cup championships in seven years from 1996-2002.

KG: On one side you had Yzerman and Fedorov, on the other Forsberg and Sakic. The talent level on both squads was tremendous, and then there were the veteran additions who fortified both sides (Patrick Roy, Teemu Selanne, Paul Kariya, Brendan Shanahan, Brett Hull). Every match-up featured a dozen future Hall of Famer’s.

DHS: I remember when those wars began Game 3 Western Conference Finals back in 1996 Red Wings forward Slava Kozlov slams Avalanche defenseman Adam Foote face-first into the glass in the first period, opening a severe gash on Foote’s forehead. He needs something like 20 stitches to close the cut, but he returns and scores a goal. None of the on-ice officials saw the hit. Colorado forward Claude Lemieux retaliates with a sucker punch that cuts open Kozlov’s mouth later Scotty Bowman verbally abuses Lemieux in the parking lot in front of Lemieux’s family and the “Blood Feud” is on.

KG: And boy was it bloody! 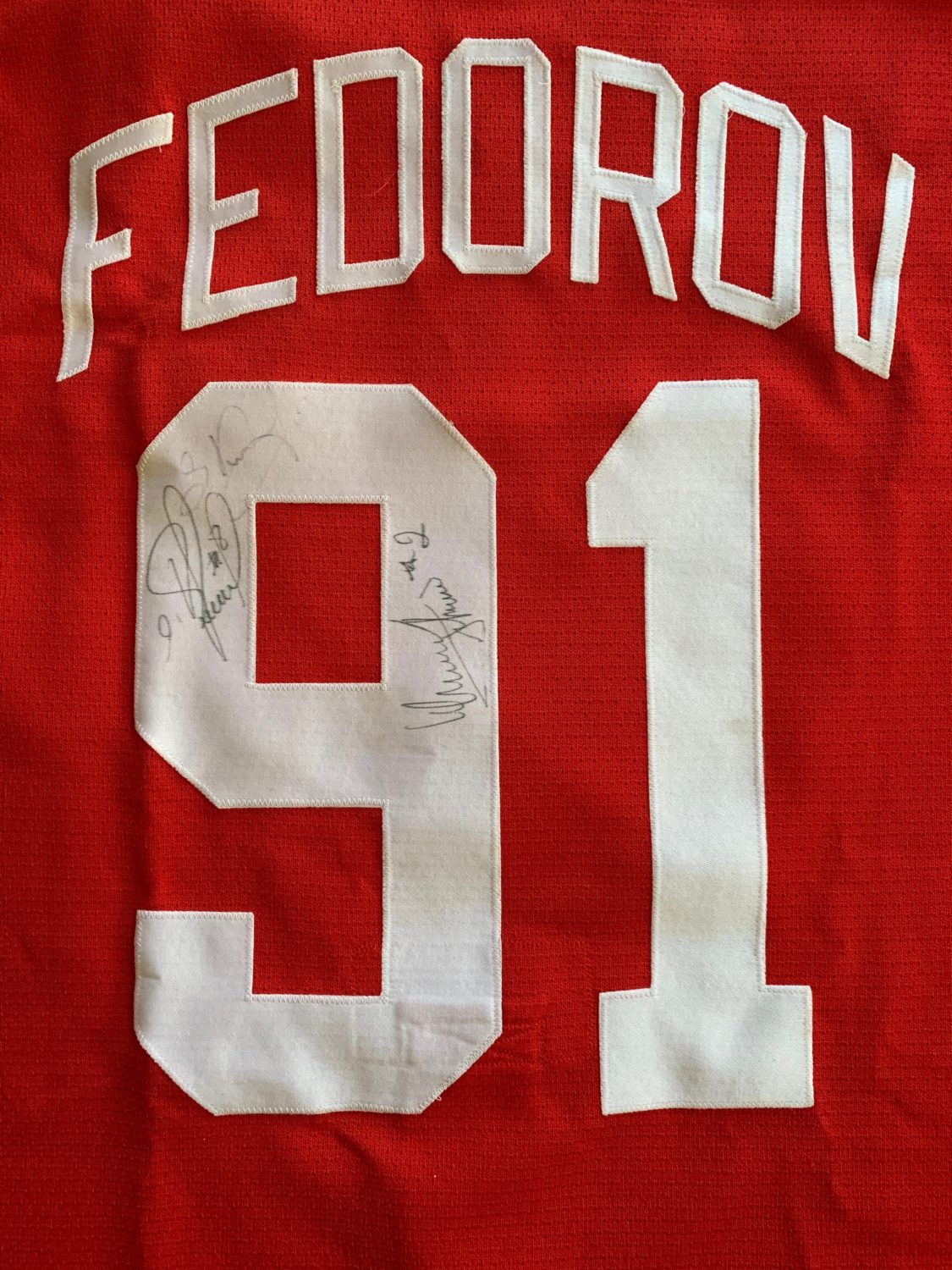 DHS: Didn’t you cover a special event for the Russian Five back in the day?

KG: I had the good fortune to cover an event honoring the “Russian Five” in early July 1997. The event was held at the Russian World Gallery in New York City, and three of the five – Igor Larionov, Slava Fetisov and Slava Kozlov – were in attendance. The players were presented with a large glass puck to celebrate their accomplishment (winning the Cup in ‘97). I brought a ton of film with me (just in case), and when the official (Russian) photographer began running low, he asked if I had any extra to spare. When I reached into my bag to get the film, he saw that I had a Red Wings jersey with me. He grabbed the jersey and immediately brought it over to Fetisov, Larionov, and Kozlov… getting all three of them to sign it, and then he invited me to join them at the after-party.

DHS: That is awesome!

KG: At the end of the event at the gallery, there was a nice performance by Alyonka and Diana Larionov (Igor’s daughters). They sang “We Are the Champions,” which had become synonymous with the Wings in general and Konstantinov in particular. It was a touching moment, one of many that fueled the Wings’ “Believe” championship defense in 1998.

DHS: Speaking of Igor Larionov, he was one of the smartest hockey players to ever saw play the game.  His situational awareness was off the charts. They used to call him the Professor. I found it interesting that he successfully lobbied his own release from the Soviet Union after trying for eight years.

KG: Larionov is great chess player… it would be really cool if you got to play against him sometime (side note Darryl is an internationally ranked player who has represented the US on numerous occasions).

DHS: It would be a tremendous honor to play him someday.

KG: The after-party was something else. My new photographer friend gave me the details, telling me to join them at The National in Brighton Beach. A lengthy F-train ride later, and I was walking through the doors of a fancy Russian restaurant. A massive buffet was set up, with a dizzying array of meat and fish, and the vodka flowed endlessly (incidentally, it was Swedish vodka on offer, not Russian). By the end of the night, I’d seen Vladimir Malkahov clowning around on the stage in a jester’s hat and nearly crashed into Darius Kasparaitis outside the men’s room. More and more food was served, and the party careened into the night. It was certainly an evening to remember.

DHS: Oh to have been there.  Good for you.

KG: It was truly amazing, though Fedorov’s absence was notable. His teammates said he was “un kupayetsa”, which meant “bathing at the beach.” You know, it’s interesting that the film didn’t spend much time (at all) looking at his tumultuous year beginning with the Wings’ first Cup win. In addition to the limousine accident that ended the playing career of arguably his closest friend on the Wings (Konstantinov), he began dating tennis player Anna Kournikova (his beach companion), one of the world’s most popular athletes of the time (she had just turned 16 in June of 1997, a storyline that would’ve received far more negative attention today than it did back then). And he also began an incredibly acrimonious holdout that kept him off the ice for most of the 1997-98 season. The Wings eventually matched a front-loaded, poison pill-laden contract offer from the Hurricanes that paid Fedorov a whopping $28 million to play 21 regular season games (and 22 playoff games, culminating in a second straight Cup victory). If the Wings hadn’t matched, they’d have received five (!) first round picks as compensation. That’s some year for Fedorov and for the Wings!

DHS: That may have been a bridge too far for the producers of the film, as Fedorov likely raised an objection to their inclusion.

KG: I wonder how much of a role the emotional reaction to Konstantinov’s injuries played in Fedorov’s desire to move on from Detroit. From all indications, Konstantinov was his closest friend in the locker room. During the holdout, there was speculation that he wouldn’t report to the Wings (if they matched Carolina’s offer), with suggestions that he’d instead return to Russia. It’s also worth noting that ‘Canes owner Peter Karmanos and Wings owner Mike Ilitch are bitter rivals, making Fedorov’s choice to sign with the ‘Canes (after Ilitch freed him from the Soviet Union) even more inflammatory. Six years later, Fedorov turned down a five-year, $50 million deal from Detroit to sign instead with Anaheim for $10 million less, basically making it abundantly clear that leaving Detroit was his priority. And yet, the 13 seasons he spent there (908 games, 954 points, +276, one Hart Trophy, two Selke Trophies and three Stanley Cups) paved his path to the Hall of Fame.

DHS: I would say that the Konstantinov injury had a huge impact on not only Fedorov but the franchise as well.  Scotty Bowman said, “Fedorov was one of my favorite players as a coach because he can do anything [asked of him on ice].” Bowman coached nine of Fedorov’s 13 seasons with Detroit. During the late 1990s, Bowman experimented by using Fedorov on defense and pairing him with Larry Murphy. Red Wings Senior Vice-President Jim Devellano said, “I’m convinced if we left him there, he’d have won a Norris Trophy.”

KG: It’s fair to say that – for me – Sergei Fedorov was the ultimate hockey player, literally able to do anything on the ice. He was an offensive force, he was arguably the best defensive forward of his generation, and Bowman characterized him as “the best defenseman in the league” for the six weeks he played there. High praise indeed.

If you get a chance to see Russian Five, don’t miss out. It’s a fantastic watch filled with terrific stories.

For those who want to delve even deeper into the story of The Russian Five, there is also an excellent companion book.