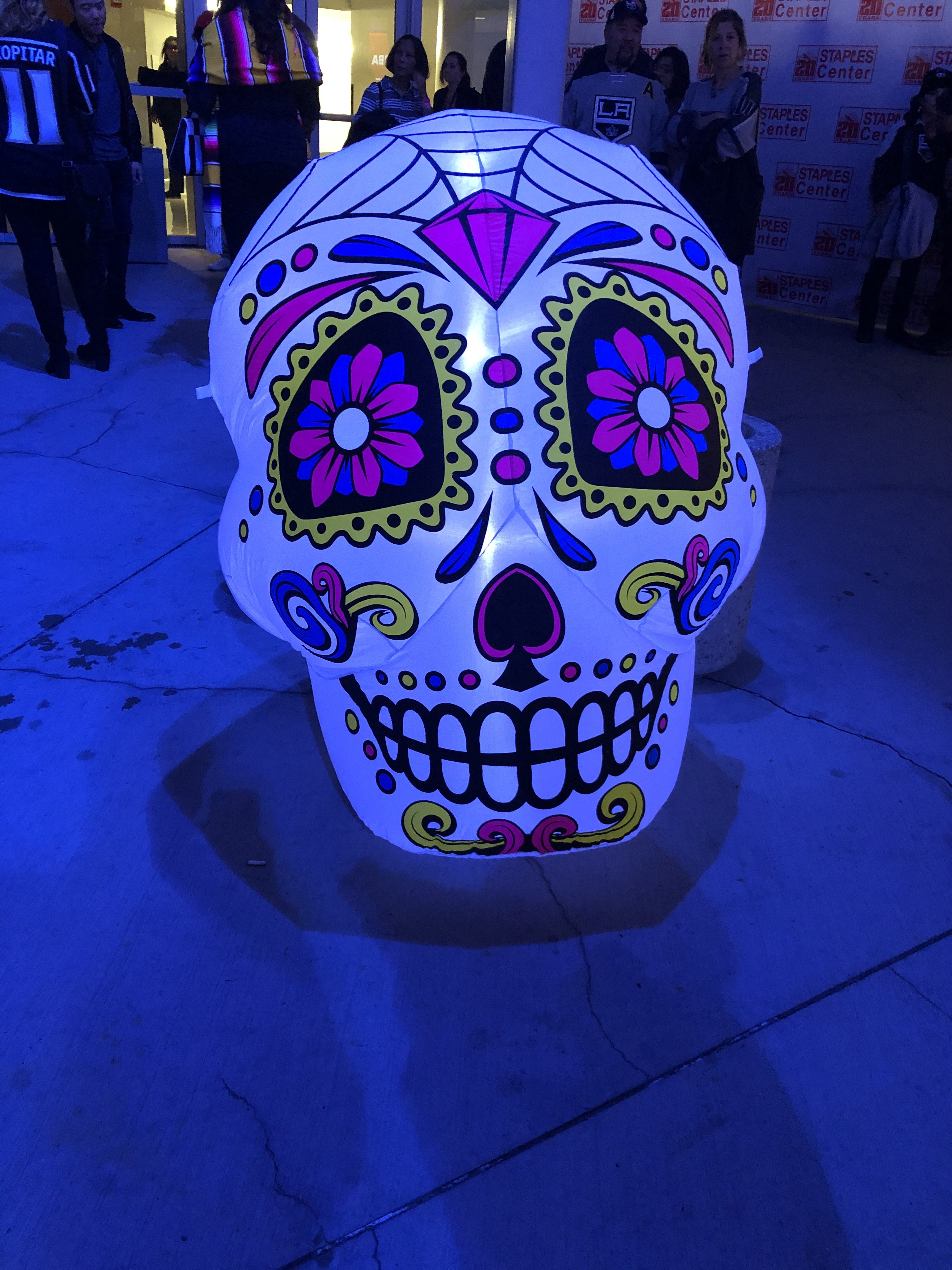 More of the Dead

As a misread metaphor, Day of the Dead (Dia de los Muertos) might have been better used for the LA Kings than the Anaheim Ducks  as each team used the motif to promote its weekend games. The festival honors and celebrates the dead with “offrendas”—altars decorated to represent the person’s life—and eating and drinking in their honor, plus other activities like skull-themed face painting.

The Ducks did their “Dia” on Friday. The Kings did theirs Saturday night. Whose “dead” were more in view—the Ducks’, who won their Cup a full dozen years ago and who have only tangential connections in the personnel of now (Ryan Getzlaf)—or the Kings’, whose Cups, plural, were as few as five years ago (2012, 2014), the reminders or which, or remainders of which, still skate (or sit on the bench) in the form of Martinez, Doughty, Kopitar, Carter, Toffoli, Lewis, Clifford, and Quick. If I had to pick the more-dead team, well . . . .

The Ducks, further, have made some noise in the early part of the season, surprising people by being “the” California team at a time where everyone had the Sharks in for another run. The Kings were expected to do exactly nothing, the Stanley Cup hangover—don’t those generally end a day or two after the party?—holding on, and on, and on into the present.

Truth is, LA has mostly lived down to expectations, starting the season with two wins in seven games, then winning a pair before dropping four in a row and piling up a horrendous -20 goal differential, tied with Detroit for worst in the league and certainly worst in the West. But none of that is a reason to stop going to the games, as was proved in their 4-3 OT win against the Blackhawks at Staples on Saturday evening.

The game started out ominously for Chicago goalie Corey Crawford. After letting in two quick goals, at 2:50 and 4:29, he was pulled. It turns out  that he got yanked for concussion protocol and was shortly back in the net. A puck had hit him in the mask.

It might not have been the goals, but the goal scorers—first Kyle Clifford and then relative newbie Matt Roy, neither of whom is there to tally but will take what he gets when offered. But give Clifford credit for roofing a wrister, a beautiful shot no matter who took it, and Roy for getting one through two converging defenders in the slot. It was not unlike a few dozen goals scored over the years by Patrick Kane, but it still looked like Crawford was leaky. It was Clifford’s second of the year and Roy’s first, and third of his career. He was, by the way, a seventh-round Kings’ pick in 2015.

So Crawford went out and Robin Lehner went in, and four minutes later it was 2-1 on a power play goal that started with a scramble and a rebound and ended with Kubalik chipping a shot into the right side of the net with Campbell not able to get over right away.

Campbell followed this up shortly later with a great glove save that caused his whole body to pinwheel dramatically in the aftermath. The crowd cheered. But shortly after, with about three minutes left in P1, he gave the puck away and watched as David Kampf buried it into the open net Campbell had just vacated.

It looked like it was going to be one of those kinds of games, the spectres represented by the skull-motif painted on so many fans’ faces in honor of the dead haunting both teams. But it settled down to a back-and-forth game where the Kings kept up the offensive pressure. Shot totals were 17-12, 18-8, and 10-4 in the three periods, all in favor of LA. In the third, the Kings surged ahead on a goal by Michael Amadio before allowing Jonathan Toews to tie it with less than two minutes to go.

The resulting OT could have ended with Alex Nylander took the puck to the LA net with a guy slightly trailing to his right. He should have shot—the spot was there—but he dished. The puck didn’t make it to the net.

Drew Doughty, meanwhile, played almost the whole OT for the Kings. They iced the puck at one point, and I looked for signs of fatigue in Doughty, but he was at least faking it right—not all bent over the stick. And he was on the spot to end it, at 4:43. The play had Toffoli assisting. He and Dustin Brown each had two assists on the night.

Doughty sped down the slot, passed to Toffoli, and went around the right side of the net. Toffoli shot. Crawford briefly had it in his pads, but it came loose as Doughty swept around the net and out the left side. He tucked it back in to end the game. Shots in OT were 4-3, again in LA’s favor.

Even mascot Bailey had the one side of his face painted calavera-style (look that up on this thing called the “internet”), and he and the 18,230 (minus maybe 4,000 Chicago-sweatered fans) screamed in delight. Their team was alive, if just for this moment.

Notes:
The Kings gave away a very cool Day of the Dead hat to select patrons, including those who were part of a pre-game party with a live Mariachi band.

The event took place on City View Terrace—aptly named with LA Live and the huge hotel-condo complex to the front and three huge condo projects, now supposedly dormant while half-built, to the right. The weather was in the mid-60s and the air clear. It was one of those nights where LA shines the best.

The Kings now head on the road. Toronto is first, on Tuesday.