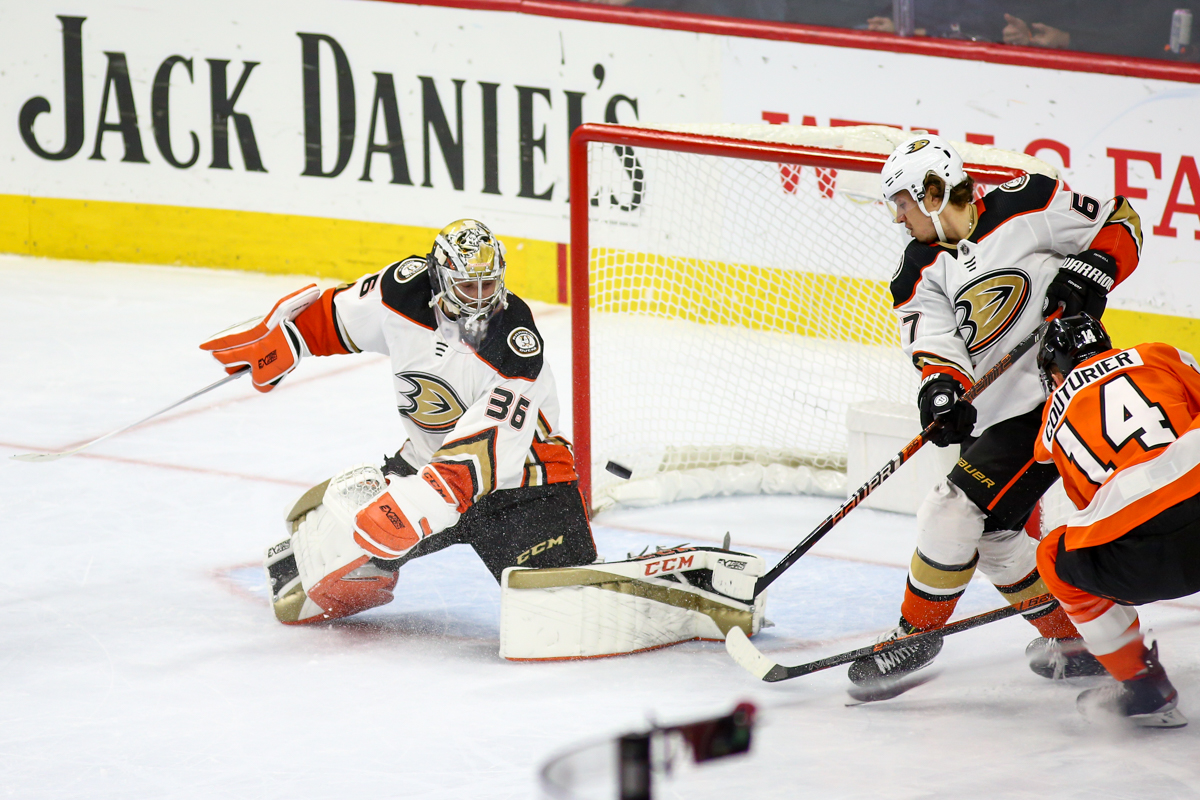 Not with a bang, but a whimper. More TS Eliot for you (see Saturday’s story for the initial Eliot reference). So the Ducks had the chance to beat St. Louis on Monday night. That had no significance of its own, but it would have kept the Kings from advancing in their playoff hopes, so a kind of indirect benefit–going out with a bang, as it were.

They failed, losing 3-1 in St. Louis. It was a good game, for the first half, because that was when the Ducks were playing like they played Saturday against the Kings—fearlessly. Like a team that cared about offense and was willing to let the defense be darned in the quest to win. There weren’t many  shots, on either side, in the first two frames, but the Ducks had some chances, and they were skating. This meant stretch passes, long throws that didn’t care whether they  got intercepted. It was exciting. So do the results matter?

The Ducks hoped they would, and they counterpunched. The Blues got a goal with about six left in Period Two, and Getzlaf got it back about a minute later.   It was a pickup of a  puck where he had no choice but to shoot, and guess what? It worked out. The assist went to—no one!  Unassisted goal. However, the Blues got another early  in the second period, only  this time, the Ducks couldn’t respond, or not with a goal, anyway. They Blues added one into the empty net late to make the score 3-1.

Captain Ryan Getzlaf said after, “I just mean, I like that we’re still battling. That’s a good hockey  team right there, and we were still in it with plenty of opportunities to put pucks away, and didn’t get to jump on it early. We’ve got to take those positives out of it and keep moving forward.” He said of the kid line (Zegras, Comtois, and Terry), “They’re doing good. They’re leaning to play off each other and work for each other very well and you know, we’re trying to get them as much ice time as they can right now and get their chemistry  going.” He stressed that time would make the difference, but said that if they  can get it to work, they should be a dangerous line for years to come.

When asked about his own participation in the nurturing of the kids, Getzlaf said, “I think I’ve made it pretty clear over the past year or so that being part of a rebuild is something I’m comfortable with in trying to help this team any  way I can. I’m going to continue that the rest of this way, and this summer, we’ll address these things and  . . . see that we’re all tugging the right way.”

The coach, Dallas Eakins, added, that Getzlaf is a leader and an example every night. IH asked him about his young guys and how he was letting them go at this point, to see what they have on offense. “Systems are basically what you fall back on when things aren’t going well, and systems are a lot to do with knowing where we’re all going to be in certain situations. When it comes to the offensive part of it, especially with a line like that [the young guys], we’re not going to give them a whole lot of direction. We want to keep their creativity. Keep their skillset intact.” He mentioned some details, but finished, “We will never, ever try to take skills away from young players.”

That’s what I thought  I’d hear, though  Eakins got a bit defensive at the end (“I don’t know it that’s what you’re referring to …”).

Honestly,  Dallas, there was no ulterior motive to the question, and I didn’t have any particular players or situations in mind. I just wanted to know if you’re giving guys free reign to play  as they can, explosively,  so that  you  can see their capabilities, and so fans have something to  cheer at the  last of a lost season, and I’m glad to know that  you  are.

Anaheim eventually registered 20 shots, to St. Louis’s 32.  They barely edged St. Louis in faceoffs, 51-49 in percentage terms. Each team had two penalties, but the Blues scored on one of their extra man situations, where the Ducks didn’t.

Cam Fowler didn’t come out for the third period. Jamie Drysdale is already on the shelf with a lower body injury  suffered Saturday against the Kings. Eakins remarked on the  loss as he wrapped up his comments.

Eakins said that Cam Fowler was missed in period three. “You’re in a game like that, a tight one, and you want another goal, you want Cam Fowler back there. It’s, we’ve got enough guys out that you’ve just got to go through the list of names, [but] the guys that we have in are giving their best, but we need a guy  that has the skating ability  and the offensive game that Cam has when you’re in a game like that.”

The Ducks have three game remaining, starting on Wednesday in St. Louis, then two in a row against Minnesota. They’re away the  rest of the  way, so Anaheim fans just have to content themselves with  TV coverage as their season winds up.

Coach Eakins said there was nobody in particular who might get an NHL audition as the season winds up.