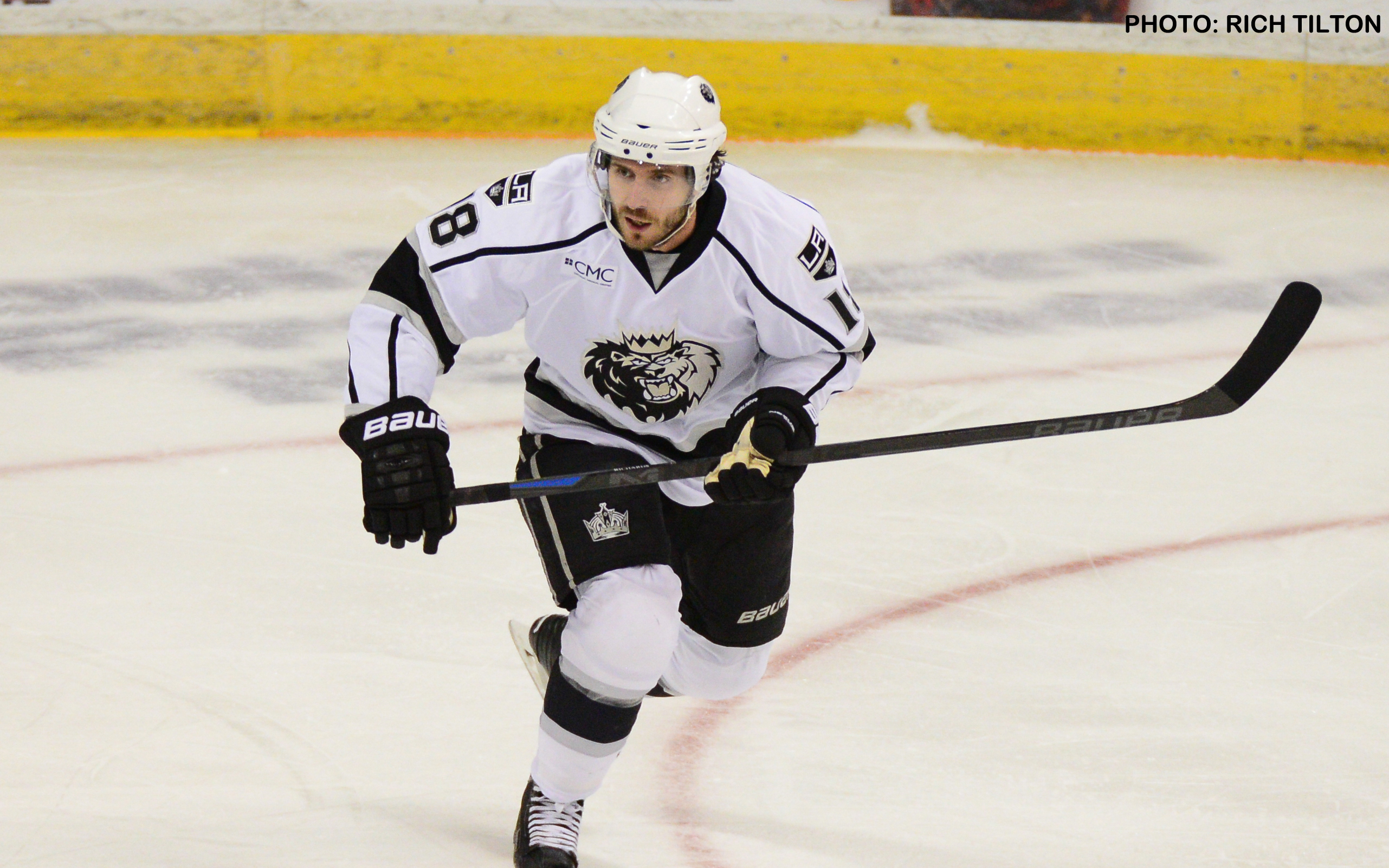 Mike Richards’ three-point night lead the Manchester Monarchs to a 4-1 victory over the Albany Devils Wednesday night at the Verizon Wireless Arena.  In his second game with the Monarchs Richards was named the number one star of the game after scoring his first AHL goal of the year and tallying two assists.  This title was well-earned for throughout the game Richards proved to be a very valuable playmaker by consistently working together with his linemates to create offensive opportunities.

“I’m just getting my legs under me and, like you said, getting used to playing with the same line mates, and getting to know them all a little bit better” Richards shares. “I thought we made some plays, but still some things to work on.”

The Monarchs were the first to light the lamp at just 1:16 into the first period.  Richards earned his first point of the night after slapping a one-timer past the Devils net minder, Scott Wedgewood.  The play started with strong stick work by Jordan Weal who sent a pass in front of the crease to Brian O’Neil who was being tightly pressured by the Devils’ defense.  Richards came barreling in towards the net to support his marked teammates.  O’Neil slipped the puck back to Richards who sent it into the back of the net to give the Monarchs the first lead of the night.

This was only the first example of flawless teamwork demonstrated by this particular offensive line during Wednesday night’s matchup.  After Richards’ AHL debut game against the Pirates Head Coach Mike Stothers had revealed his plan to potentially mix up the lines in order to put Richards between Weal and O’Neil.  Clearly this was a very effective change for the three dynamic players worked off one another very well which they were able to translate into goals for their team.

The Monarchs doubled their lead with just 4:06 remaining in the first period, after Andrew Crescenzi scored a power-play goal with assists from Sean Backman and Andrew Bodnarchuk.  As the first power-play of the game for the Monarchs the team wasted no time playing with the puck.  Instead the team focused on constantly switching to create better shooting angles and cutting into space in order to send the puck on net which is exactly how Crescenzi scored his goal.

The Monarchs penalty kill was truly put to the test in the second period, after spending quite a bit of time in the sin bin.  The team was called for a total of six penalties in the second period alone.  However, the Monarchs were successful in denying all of the Devils’ shooting opportunities during the power-plays.

The team increased their lead after O’Neil notched a shorthanded goal passed Wedgewood at 11:29 in the second.  The goal was the result of a turnover caused by the strong poke check of Richards who quickly stole possession of the puck and created an offensive opportunity for the Monarchs.  Linemate, O’Neil skated rapidly to the post ready to collect a pass or rebound off of his teammates’ shot.  Richards was close enough to the net to take a shot, but instead he fed the puck to O’Neil at the post who smacked the puck to the back of the net.  This was a perfect instance of unselfish playing and strong teamwork portrayed by the Monarchs throughout the game.

With 3:31 left to play in the second the Devils finally managed to chip the puck past the Monarchs defense.  Mike Sislo sent the puck just inside Monarchs’ goalie, Jean-Francois Berube, and the post which finally put the Devils on the board.  His teammates Paul Thompson and Reece Scarlett both earned a point for their assists on the goal.

The fourth and final goal of the night was awarded to the Monarchs’ defender, Colin Miller, who ripped a slap shot from the top of the Devils’ zone.  Both O’Neil and Richards earned their third point of the game with their assists on the play.

By the end of the game the Monarchs had killed off a total of 9 penalties through their effective use of the body and patience on defense. “I think the key to it though was the number of shots that we blocked” Stothers said.  “Our defensemen did a great job of getting in front of things.”  The Monarchs implemented short, quick passes to outlet the puck out of their defensive end and into the Devils’ zone.

The Monarchs return to the ice on Saturday February 7th when they host the Providence Bruins in their annual “Pink in the Rink” game.  All proceeds from the game will go directly to the Breast Care Center at Catholic Medical Center.