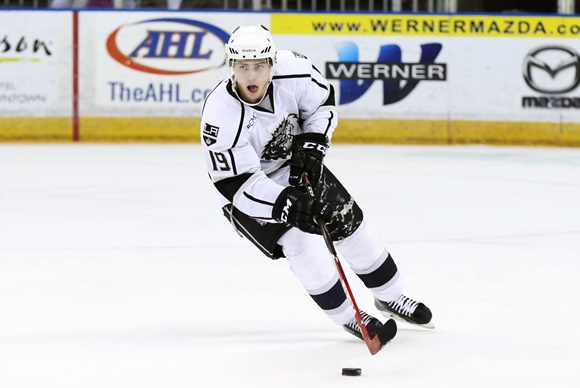 The Manchester Monarchs finished off their final regular-season home game with a 4-2 victory over the Worcester Sharks Saturday night at the Verizon Wireless Arena.  It was a packed house for the Monarchs’ last regular-season home game as the team celebrated Fan Appreciation Night in Manchester, NH.  Prior to the first puck drop Head Coach, Mike Stothers, and several Monarchs’ players including Colin Miller, Jordan Weal, and Brian O’Neil were honored for their outstanding achievements this season.

From the very beginning of the game, it was clear that both the Monarchs and Sharks were fired up and ready to battle for the win.  Prior to the game, the Monarchs already guaranteed their spot as the number one seed for the 2015 playoffs for the Calder Cup.  However, that did not slow either team down as they set off for a grueling matchup.

It wasn’t long before the Monarchs opened the scoring with a tip from Michael Mersch at just 32 seconds into the game.  The Monarchs earned the first point of the game after winning the first face-off and quickly generating an offensive rush against the Sharks.  Teammates Nick Ebert and Sean Backman each earned a point for their help on the play.  The Monarchs wasted little time handling the puck off of a face-off win, which is what made the play so successful.  Backman won the face-off in the Sharks zone and quickly sent the puck back for Ebert to drive the puck on goal.  Mersch was keenly positioned out front in order to finish the play with a tip past the Sharks’ goaltender, Troy Grosenick.

Feeling confident with their lead the Monarchs worked the puck through the Sharks’ defenders by implementing flawless, tape-to-tape passing.  The Monarchs controlled much of the play offensively rushing the Sharks’ defenders.  At 5:39 in the first the Sharks were able to catch the Monarchs sleeping as Nikolay Goldobin scored the equalizer goal.  Goldobin was hell-bent on tying the game as he hastily skated in to send a backhander past netminder, Jean-Francois Berube, with help from Rylan Schwartz and Evan Trupp.

The Monarchs increased their momentum as they played a strong passing game to work the puck around the Sharks.  They stayed strong on the puck and skated hard in order to push through their defenders and generate more offensive opportunities.  The team was able to strike back at 12:06 when Scott Sabourin buried the puck into the back of the Sharks’ net.  Andrew Bodnarchuk set the play in motion after weaving a pass from behind the net through traffic to Ebert out front.  Ebert quickly passed it off to Sabourin to finish the play and to regain the Monarchs’ lead.

Just a few minutes later Goldobin earned his second goal of the night, which tied the game with two goals apiece.  Goldobin utilized his rapid skating along with his fierce determination to catch the Monarchs off guard.  At 15:23 Goldobin sent a hard wrist shot that beat Berube and evened the score.  Trupp tallied another point on his assist.

The Monarchs’, Jordan Weal, quickly retaliated after forcing a turnover in the Sharks’ defensive zone which translated into an unassisted goal.  Weal maintained strong pressure on the Sharks’ defenders throughout the game, which eventually worked in his favor.  With less than 30 seconds left to play in the first Weal was able to poke the puck loose and then dangled past Grosenick to take back the lead.

The second period went on scoreless in addition to the majority of the third period as both teams struggled to finish on goal.  Defensively the Monarchs worked to better defend the Sharks’ fast-paced cherry pickers such as Goldobin who had already beat them twice with his speed.  As the end of the game neared, the Sharks added an extra skater in place of Grosenick as they fought to even the score.  The Monarchs made sure not to overcommit defensively as they squared up against the Sharks for the final two minutes of regulation.  The crowd roared loudly as the Monarchs gained possession and worked the puck down ice towards the Sharks’ empty net.  After a wide shot from the blue line sent the puck behind the net, David Van der Gulik regained possession and passed it off to Josh Gratton who slipped it into the open goal to give the Monarchs the two-goal advantage.

Stars of the Game: