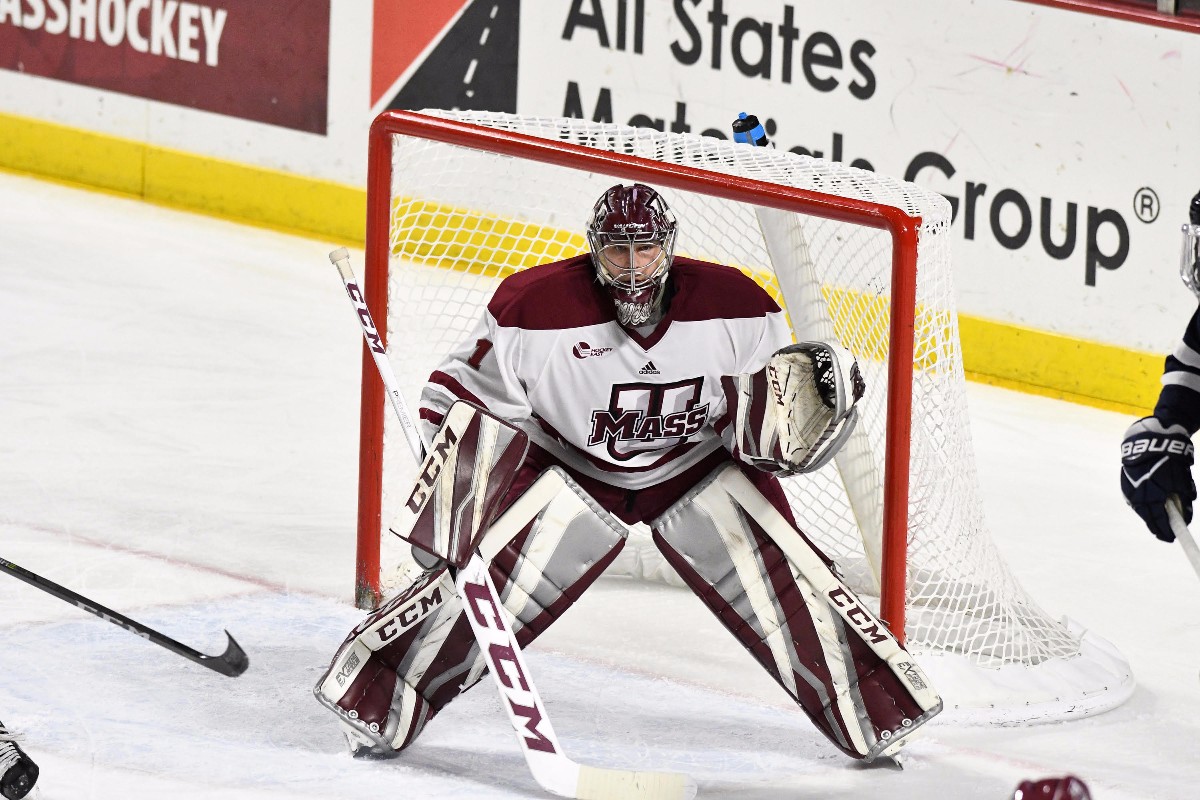 Amherst, MA- The Massachusetts Minutemen have taken huge steps of progression this season. The 2018 season has seen UMass land big victories over Providence and Northeastern and earn home playoff ice for the first time since 2007. Greg Carvel’s unit took to the ice at the Mullins Center on Thursday night looking for their first Playoff win in three years against the Vermont Catamounts. UVM started the game on time, but UMass finished the night victorious.

UMass outshot UVM 8-6 in the first period but made several key mistakes that gave Vermont the early momentum. They bobbled pucks at the blue line and gave the Catamounts some clear chances on Matt Murray in net. Murray stopped most of them, but after three of his teammates whiffed on a puck following a turnover, Matt Alvaro’s wrister from the slot gave Vermont a 1-0 lead 13:09 into the first. UMass’s offense could not get momentum back in their favor before intermission.

The Minutemen continued making mistakes in the second period that extended Vermont’s lead. The teams got ten shots each, but UMass committed three penalties in the frame. With much of the period gone, Niko Hildenbrand committed a roughing penalty. Thirty-two seconds into the penalty, Ivan Chukarov committed a foolish cross-checking penalty that gave UVM a five-on-three penalty. UMass mostly killed the penalty, but they left Jake Massie too much room and the senior landed the goal for a 2-0 Catamount lead.

Shortly after, with all the momentum going their way, Vermont gave the Minutemen a chance to reclaim the game. With 1:40 left, Jarrid Privitera speared Cale Makar in the ribs and was called for a five minute major and a game misconduct. UMass didn’t capitalize in the second period but did in the third. John Leonard drove from the right goal line to the doorstep and beat UVM Goalie Stefanos Lekkas five-hole to get UMass on the board 59 seconds into the third.

UVM continued to commit critical mistakes when Matt Alvaro was called for a misconduct and Alex Esposito was called for shooting on net after an offsides whistle was blown. On a power play shortly before the halfway point, Cale Makar deked through three defenders and roofed a puck on Lekkas to tie the game. Lekkas stole the show with diving saves, split saves, and a remarkable effort to force overtime in college hockey’s playoff opener.

Overtime was just as entertaining as regulation. Each team had great chances, each team got nice shots, and Murray and Lekkas traded excellent saves. With time winding down, UMass sent their fans into a frenzy. John Leonard worked the puck out of his defensive corner, skated through two defenders, and lugged the puck into the Vermont end. He threw a backhand across the crease to Philip Lagunov, who deflected the puck into the net off his facemask. The play was ruled not a goal initially but after review, the goal was allowed and UMass landed a 3-2 victory with 3.3 seconds left in the overtime.

Vermont’s record drops to 9-18-7. Catamount head coach Kevin Sneddon was critical of his team’s late performance after the game.

“Huge missed opportunity. The story of our game was a total lack of discipline. I’m disappointed in our club. We gave them a spear when we had all the momentum in the world and we got frustrated with the refs after. Sounds to me like we self-imploded. Credit to UMass for the comeback, but we beat ourselves tonight.”

UMass climbs to 15-17-2. The win gives UMass an 11 game improvement over last season, the biggest turnaround in program history. Greg Carvel was harsh on his team’s early performance but happy with the late bounceback.

“I didn’t like the way we started the game. Vermont was more motivated to start the game. As the game went on, we got better. That was an entertaining playoff game. Our best players rose to the top. Cale’s goal is as good as you’ll see in college hockey.”

The teams rematch on Friday night at the Mullins Center for game two of a best-of-three playoff series. UMass goes for their first series victory in 11 years. Puck drops at 7 pm in Amherst.