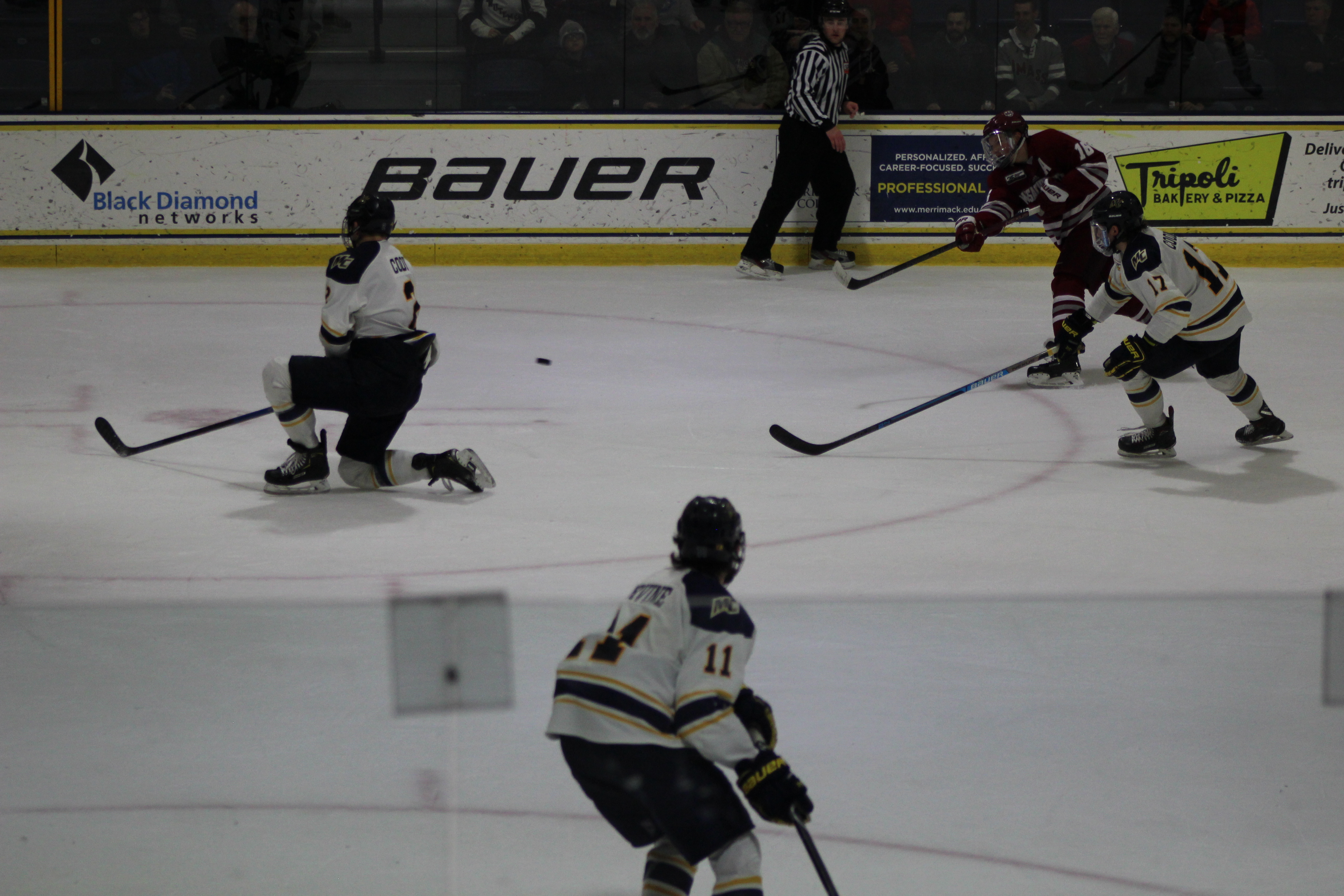 North Andover, MA. – Two teams at opposite ends of the standings faced-off tonight. One would skulk off across campus in the frigid New England night, the other would have a bus ride home like never before. The Merrimack Warriors, in last place on 10 points in Hockey East, played host to first place Massachusetts. The 2nd ranked Minutemen, who have been checking off milestones all season, are atop the conference at 32 points. A win or a tie would see the school win it’s first ever Hockey East regular season Championship.

An early Merrimack penalty on Matt McArdle for Interference gave the nation’s second-best power play unit the chance to work with space on the small Lawler Arena ice. A mere twenty seconds was all the time and space that Cale Makar would need to put UMass up 1-0. After starting the play from the top of the zone, Makar crashed the Merrimack net and blasted a rebound past Craig Pantano at 3:46.

The Minutemen and warriors traded penalties a quarter of the way in. UMass defenseman Jake McLaughlin was called for Hooking at 6:26. Merrimack’s Michael Babcock had a chance on a loose puck at the post that Matt Murray was able to get a pad on. At 9:11 Babcock would be in the penalty box himself when he was whistled for Interference. A Murray turnover at the UMass net led to a chance by Warrior forward Tyler Irvine. The period would close with the Warriors on the man advantage as Mitchell Chaffee was called for Hitting From Behind at 18:23. Merrimack had some solid pressure to close out but still trailed 1-0.

That pressure and the power play carried over into the second period for Merrimack as senior Derek Petti scored just twenty-seven seconds in, tying the game at one. Petti banged home the puck to the left of a sprawling Murray. Overall this period was dominated by the referees. Ten penalties were assessed in the period, five a side. None worse than the Contact to the Head and 10-minute Game Misconduct given to Petti at 9:05. That would be the end of Petti’s night, and the last time he steps on the Lawler ice. Through all the stops and starts of the period, the Minutemen managed to outshoot the Warriors 15-10. Despite the shot differential Merrimack managed to pull ahead 2-1 at 18:37 when Ryan Cook knocked home a rebound to the right of Murray.

The play of Pantano in the Warrior net, coupled with the physical play of Merrimack, made it look tonight might not be the night for UMass. This has been a resilient Massachusetts team, and tonight was no different. A harmless one on one chance by UMass forward Bobby Trivigno eeked its way through Pantano’s pads at 3:52 to tie the game 2-2. Just seconds later Jake Gaudet made it 3-2 UMass when he tipped in a Makar shot from the right point. The Minutemen never looked back. A pair of Merrimack penalties only increased the shot total, but not the score. Gaudet would be called for Slashing at 16:53. With Merrimack threatening, coach Scott Borek pulled Pantano for the additional skater, Makar made them pay with the empty net goal at 17:44 sealing the deal on the game and the first piece of hardware for the Minutemen trophy case.

After the game, a still fully dressed, Matt Murray said that Captain Niko Hildenbrand lit a spark under the team.

“Niko stepped in during the second intermission, he said some words we needed to hear and I think that was the turning point for us,” Murray said. “We came in in the third period and dominated those first five minutes and just carried it on through.” Dripping with sweat the goalie gave props to his teammates first and foremost when asked about his career high, a school record, 20th win “I think it shows a lot about the team. All the guys have been amazing, making it a relatively easy year for me compared to how it could have been. Their icing in front of pucks head first, they’re packing their bodies on the line, it’s amazing to see the courage the team has. I think that’s one of the biggest attributes to being able to have that 20 win season.”

Minutemen coach Greg Carvel was his reserved self after the win. All season UMass has been checking things off their list, defying naysayers, and Carvel has downplayed each achievement. Whether it’s getting off to the school’s best start, getting UMass’ first ever #1 ranking, sweeping BU for the first time, or winning the school’s first championship. When asked how he’s feeling being regular season champs in just his third year.

“I’m enjoying it,” Carvel said. “There’s only been, I think, five teams in Hockey East that have won the regular season championship, so it’s very special. It’s an incredible honor to win this. It was our short term goal, and its great.”

“For what this program has been through over the years its a pretty special accomplishment,”Hobey Baker hopeful Makar said. “Obviously, something we knew we were capable of the whole year but it’s special for us. It’s just a stepping stone.” The sophomore said the team is going to enjoy the win, but “our mindset turns right away to Maine on Saturday. It’s going to be another battle of a game. Their a tough team to play, and their still fighting for a spot. We’re going to have to be ready for them. Hopefully, for the next couple of hours, we’ll relish what we’ve been through and we’ll move on.”

For Merrimack, they close out coach Borek’s first season on Saturday at Boston University. Puck drops at 7:00 pm. The Minutemen are home to take on Maine on Saturday at 8:00 pm. They close it their regular season next Friday at UConn at 7:05 pm.