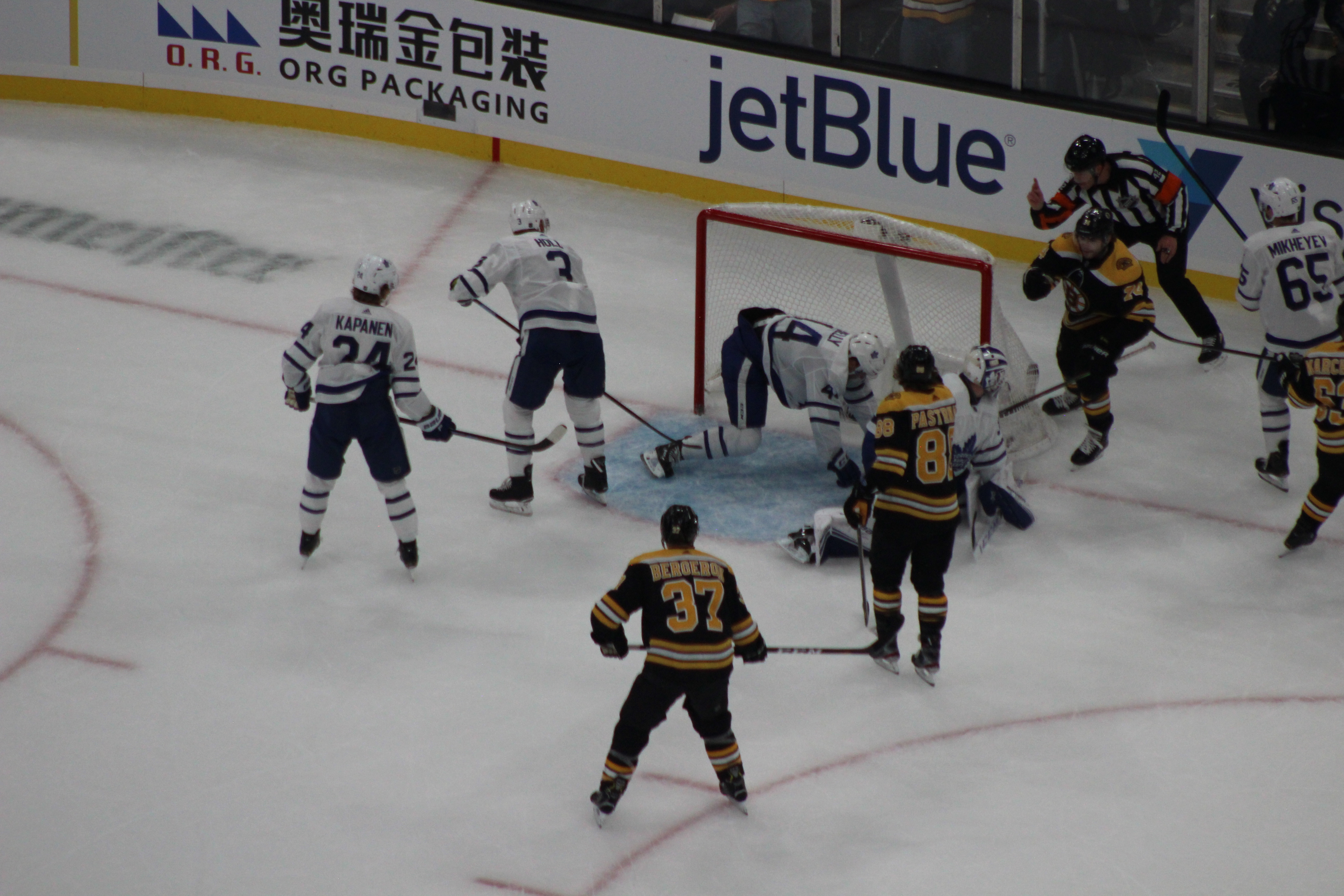 Boston, MA — Tuukka Rask was starting his 500th game for the Bruins, Bruce Cassidy was coaching his 200th game behind the Boston bench, and David Pastrnak would notch his 300th career point in black and gold, while the Toronto Maple Leafs were playing in the second night of back to back games. Toronto lost 4-3 in overtime in Columbus last night. The Bruins had been off since losing to the Leafs 4-3, in OT as well, in Toronto on Saturday night. Pastrnak extended his point streak to seven games tonight, with a goal and an assist, for 17 points in that span.

Pastrnak came out firing in the first period. Just a minute into the game, the Czech forward fired off a shot that Michael Hutchinson gloved. At 10:48 it appeared that Pastrnak found the back of the net when he banged home a rebound that Brad Marchand dug free from under Hutchinson. Leafs coach Mike Babcock used his Coaches Challenge and it was determined that the Bruins were offsides when entering the Leafs zone.

At 16:26 Andreas Johnsson was sent off for Hooking. This pitted the league’s second-best power play against the sixteenth penalty kill. Marchand fed the puck down low to Pastrnak, on Hutchinson’s right, he walked in along the goal line, put his stick between his legs and shot on goal. Somehow the shot trickled by Hutchinson for the 1-0 Bruins lead. The Bruins outshot the Leafs 12-9 for the period.

The middle frame was back and forth. Anders Bjork hit the crossbar on a shot from the slot. The Leafs corralled the rebound and raced down the other end. Alexander Kerfoot carried into the Bruins zone and dished to Kasperi Kapanen who ripped a one-timer past Rask to tie the game at 1-1.

Just over a minute later the Bruins answered when Marchand wristed a Pastrnak feed past Hutchinson, glove-side high at 6:09.

Zdeno Chara was whistled for Tripping at 11:40 giving the Leafs the man advantage. Kapanen set up Kerfoot for a one-time blast tying the game at 2-2. The power play goal came at 12:54. The Bruins almost scored again at 15:54 when Sean Kuraly was tripped by Morgan Reilly, the two players crashed into Hutchinson as the puck trickled out front. Bjork tried to snap it home but a still sliding Hutchinson gloved it out of the air before it could cross the goal line. The Bruins were unable to take advantage of Reilly being in the penalty box. The Bruins continued to out-shoot the Leafs 12-11 for the period.

The third opened with a two on two chance by Toronto but a solid back-check by Patrice Bergeron resulted in his getting a stick on Austin Matthews stick as the 6′-3″ center was bearing in on Rask. At the other end, Pastrnak had a chance at the side of the net but a diving Hutchinson kept the game even. That wouldn’t last long as Brett Ritchie‘s second goal of the year put the Bruins up for good 3-2 at 6:35. Ritchie wristed the puck past Hutchinson after Jake DeBrusk tried to shoot on the net, but the puck deflected off a defensemen’s skate to Ritchie.

At 15:48 Kuraly was sent off for High-Sticking. The Leafs didn’t muster much on the man advantage but at the end of the play Kuraly had slipped out of the box and joined in on a two on one with Par Lindholm. Lindholm knocked home the rebound to close this one out at 17:58. Despite a Marchand penalty at 1:55, and Hutchinson on the bench for an extra attacker to end the game, the Leafs were unable to capitalize on the six on four advantage. The Bruins out-shot the Leafs 39-29 on the evening and won the face-off battle 38-25.

Cassidy had high praise for Pastrnak after the game. “Everything catches my eye with him (Pastrnak) lately,” said the Bruins coach. “He’s just on it. He’s on pucks, he’s strong, his conditioning seems great. He’s playing a lot of minutes, hard minutes against good players every night. Playmaking ability, he’s making plays as well, he’s getting his shot off. I think last year he was fighting the puck a little bit in the playoffs for whatever reason. I think it was rust, to be honest with you. He missed key time at the end of the year. He’s spot on this year.”