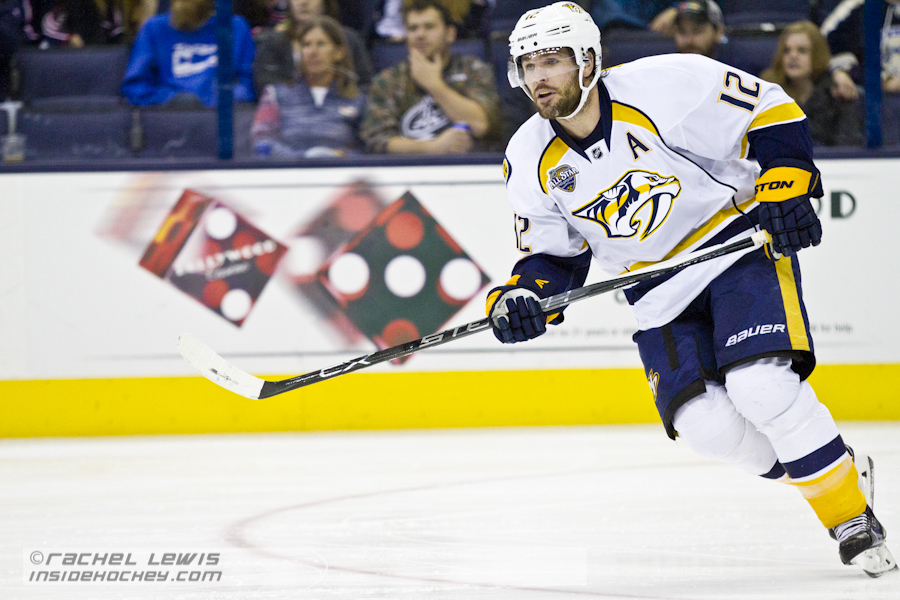 Mike Fisher (NSH - 12) skates out of the Nashville zone.

Mike Fisher scored in triple overtime to lead the Nashville Predators to a 4-3 win over the San Jose Sharks in Game 4 of their second-round playoff match-up. The series is now deadlocked at 2-2 with each team winning both games on home ice.

The Sharks had a desire to match the desperation level of the Nashville Predators in Game 4 on Thursday. The Sharks thought they played a better 5-on-5 game in a Game 3 loss than they did in a Game 2 win, but they want to improve in Game 4 and learn from their mistakes.

“I think it definitely grabs our attention for sure, losing a game,” Sharks coach Peter DeBoer said. “I would expect our desperation level to be in a real good place tonight.”

However, Game 4 was far from an easy process and it certainly worked in favor of the Predators.

Colin Wilson shoveled in a loose puck off a deflection by Martin Jones to give the Predators a 1-0 lead 41 seconds into the opening period. Mattias Elkholm and Ryan Elkholm provided the assists on Wilson’s fourth playoff goal.

Mike Fisher finished a rebound from James Neal’s shot and slammed it past Martin Jones to put the Predators up 2-1 at 9:50. Roman Josi provided the other assist on Fisher’s third playoff goal.

Burns was penalized for tripping Craig Smith at 16:48. The Predators went on their first power play of the game, but were unable to take advantage of it.

The Sharks were lucky to be down 2-1 after the first period. They were outshot 10-5.

The first major skirmish of the game occurred when Tommy Wingels and Filip Forsberg dropped the gloves at 6:38 of the second. Consequently, both players received a roughing penalty and there were two minutes of 4-on-4 hockey. Rinne came up with some big saves on chances by Couture and Joe Pavelski.

The Sharks went on their first power play of the game after Josi was called for interference against Pavelski, however, they didn’t capitalize on it.

Martin set up a play to Marc Edouard Vlasic who passed the puck to Joonas Donskoi, whose slap shot hit off the stick of Ryan Ellis and went through the legs of Rinne, tying the game 2-2 at 14:09. The score remained 2-2 after 4o minutes of play.

There was 38 seconds left in Braun’s penalty to start the third period.

Then, Burns received a penalty for delaying the game with a puck over the glass. After back-to-back power plays for the Predators, San Jose went on the man advantage following Miikka Salomaki’s penalty for boarding Couture.

Burns scored the go-ahead goal on the power play by putting a snap shot on net that deflected off the arm of Josi and in, giving the Sharks their first lead of the game, 3-2, at 6:48.

The Sharks had the lead late in the third period, but couldn’t hold it. James Neal rifled a snap shot on a rebound top-shelf past Jones, tying the game 3-3 with 4:21 left in regulation time. Game 4 was headed to overtime.

The Sharks appeared to score the winner in the first overtime. Joe Pavelski deposited the puck in the net off a desperate scramble in front of the net. However, it was ruled no goal due to goalie interference. Replays showed Pavelski was checked into Rinne, but after an extensive review, the no-goal call stood and the game continued.

Neither team scored in the first extra session, sending the contest to double overtime.

Joe Thornton received a penalty for high sticking Salomaki at 2:56. The Predators went on their second power play in overtime, but the Sharks killed it off.

The Sharks finally received a power play in overtime after Shea Weber was called for high sticking Martin at 17:57. Subsequently, Peter DeBoer called a timeout for San Jose. Despite the extra attacker, the Sharks could not convert on the power play.

Mike Fisher scored the game-winning goal at 11:12 of triple overtime, lifting the Predators past the Sharks for a 4-3 victory in Game 4, tying the best-of-seven series 2-2. Pekka Rinne made 44 saves for Nashville. Martin Jones made 41 saves for San Jose.

Up Next: Sharks will head back to SAP Center for Game 5 against the Predators. Puck drop is scheduled for Saturday at 7:00 pm PT on NBCSN, TVA and CBC.