Worcester, MA – The Holy Cross Crusaders were coming off a huge 3-2 overtime win over Providence College in their last game on Saturday. Never mind that their last game was an 11-5 beatdown at the hands of Wisconsin, but the Merrimack Warriors hadn’t won a game since January 12, 2019, a 5-2 defeat of UConn. For each team, tonight was a statement game. Can the Crusaders make it two straight over Hockey East or can the Warriors respond from such a lopsided loss?

It looked as if neither team was up to the task early as both struggled to gain momentum. Sophomore Conner Jean gave the Crusaders the early lead when he was able to slip between Merrimack defensemen Zach Vinnell and Liam Dennison and race in on freshman goalie Troy Kobryn, and beat him high, blocker-side with a snap shot at 5:37. The game had great pace as both squads feature some speedy players. Despite being down, Merrimack controlled the play after the goal.

Senior Tyler Drevitch tied the game when he tipped a Dominic Dockery shot past freshman goalie Matt Radomsky at 15:04. The Warriors led in shots 16-8 and face-off wins 14-6 after one.

The second period was all Merrimack to start. The Warriors came out buzzing and it led to a Cross-Checking penalty on HC’s Grayson Constable just 1:39 into the action. Senior Sami Tavernier‘s first goal of the year put MC up 2-1 when he managed to shot the puck through a scrum in front of Radomsky at 1:56. The power play goal, was the team’s first of the season.

The two teams traded opportunities as play was end to end. Both freshmen goalies were playing great, Radomsky was making his case to keep the Crusaders job, while Kobryn was auditioning for his chance. There were four more penalties called in the second, three to Merrimack and one to Holy Cross, but neither team was able to take advantage. The Crusaders outshot the Warriors 11-6 for the period, while face-off wins were even at 10.

The third period had HC on the offensive again, but couldn’t solve Kobryn again. He made a save on a Nick Hale shot from the blue line and then stopped the rebound attempt by Ryan Leibold on the doorstep. The Crusaders would put 16 shots on the Merrimack keeper in the third. Even after losing his skate blade at one point, while on the penalty kill, in the period the Hillsbourough, NJ native was unflappable.

The Crusaders, who had trailed in their win over PC, were playing like they were going to tie this one too. But with freshman forward Alex Peterson in the box for Hooking at 11:41, Merrimack then sealed the deal when Tavernier slid the puck across the crease to a wide open Logan Drevitch for the one timer and the Warriors first win of the young season. 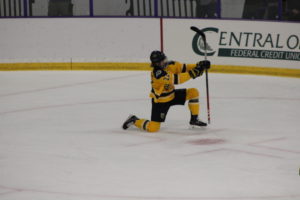 “It’s great to get the first win for our team,” said second year coach Scott Borek. “I thought there were times where were played really well and there were times where we played really young. What you saw in the third period, especially in the last 10 minutes was a team that hadn’t won a game yet and was just trying any way to win it. We kind of got away from ourselves a little bit, but we did enough to win the hockey game and at the end of the day that’s all that matters.”

Borek credited the play of Kobryn being the key factor in the game’s outcome. “He didn’t let second chances happen, to me that was the difference tonight from the game we played against Wisconsin. Holy Cross played really hard, they forechecked really hard, they put a lot of pressure on us, but we didn’t give up second chances. They were one and done and that was key to the game.”

“I thought Merrimack came in ready to play,” said Crusaders coach David Berard. “Obviously they didn’t have a great night last Saturday so I’m sure their week was stressing working harder and competing harder. I thought in the first period they outplayed us, and they outshot us 16-8. I thought they were the better team, even though it was 1-1. I think that got them some confidence. Then they converted on that power play, we had guys in the area, we just didn’t defend it right. We were chasing it.”

Berard liked how his team competed, he just wants it to be a 60 minute effort. “I thought the last 10 minutes of the second and the first maybe 12 minutes of the third we had a lot of good shifts, had some good chances, good opportunities but their goalie played well. Then they got a big power play goal. Tonight they scored two power play goals and we didn’t score any and that was the difference in the game. Hats off to them but for us its about we have to work a certain way in order to win. And we had glimpses of that throughout the game, we didn’t do it consistently enough. In the critical moments they won those one on one battles, we lost them and that was the difference.”

The Warriors travel to Rochester, NY to take on RIT on Saturday. While the Crusaders head to Boston to take on Northeastern. Puck drops at 7:00 pm for both contests.