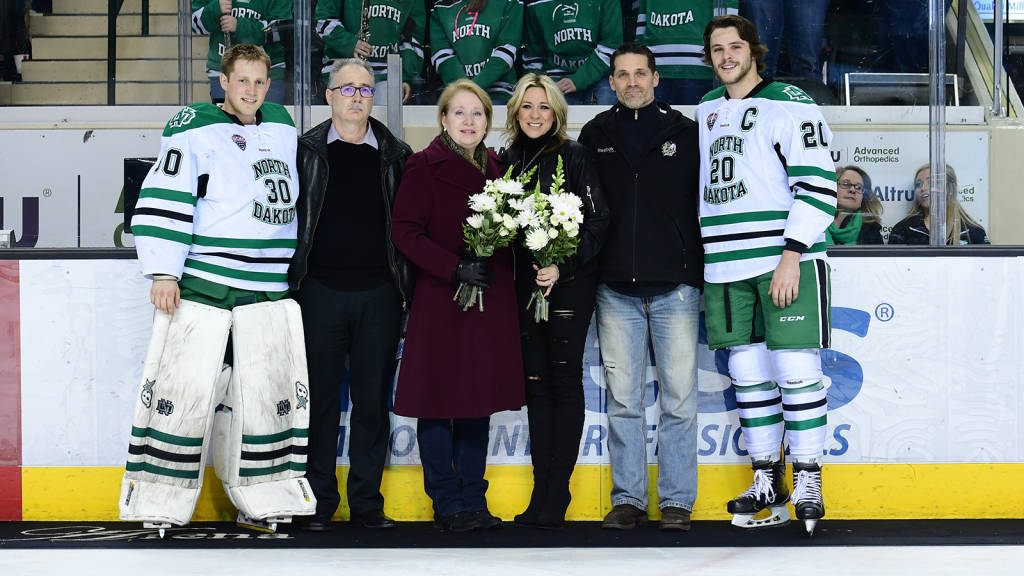 And then there were 2 #Seniors pic.twitter.com/909bdeGz29

First things, first. Before the celebration, there was a game to be played.

Things didn’t start well for UND. At the 8:45 mark of the first period, the Mavericks got on the board first with a power-play goal from junior forward David Pope.

For most of the game, there wasn’t a lot of action and neither team scored during the second period. Finally, at the 5:43 mark of the third period, the Mavericks would extend their lead to 2-0 with a goal from Riley Alferd. In the end it just wasn’t mean to be, Mavericks forward Austin Ortega would get an empty net goal in the waning moments to ice the game to give UNO a 3-0 win. Ortega was solid all game scoring a goal and three points.

After winning an exciting game on Friday. The Hawks came out of the gates a bit flat on Saturday night and chased the Mavericks for most of the game. During the second period, the Fighting Hawks suffered a major power outage and put one shot on the Mavericks goal. A hockey team can’t win a lot of hockey game when your team is only putting one shot on net.

“I think we were being unpredictable to each other,” head coach Brad Berry said. “When you have success as a team, it’s a predictability of getting pucks deep. Everybody being on the same page of entering the zone and making plays and passes. I thought we looked like five guys going five in a different direction. In the second period, we weren’t playing as a team together. When that happens, you can’t sustain anything.”

Again, scoring goals was a problem for the Hawks. Mavericks goalie Evan Weninger was a brick wall stopping all 22 shots that he faced to record his second shutout of the season. With the win, Weninger improves to 10-7-4.

When the Fighting Hawks desperately needed a win, they fell flat. There’s a feeling that they let one slip through their fingers when they needed a win.

We talked about it all day,” coach Berry said. “We got in here at 10 in the morning and through the whole day preparing for meetings and things like that, we talked about the urgency and taking another step forward, home ice, Pairwise and everything.

With the loss, UND falls to 16-14-3, 9-12-1 NCHC. It’s now or never for the Hawks. They’re only guaranteed four more games. They need wins if they want to make the NCAA tourney.

“It’s tough to swallow,” Ausmus said. “That’s hockey. Every team is different. Right now, every guy in the locker room needs to realize what is on the line and what’s at stake here.”