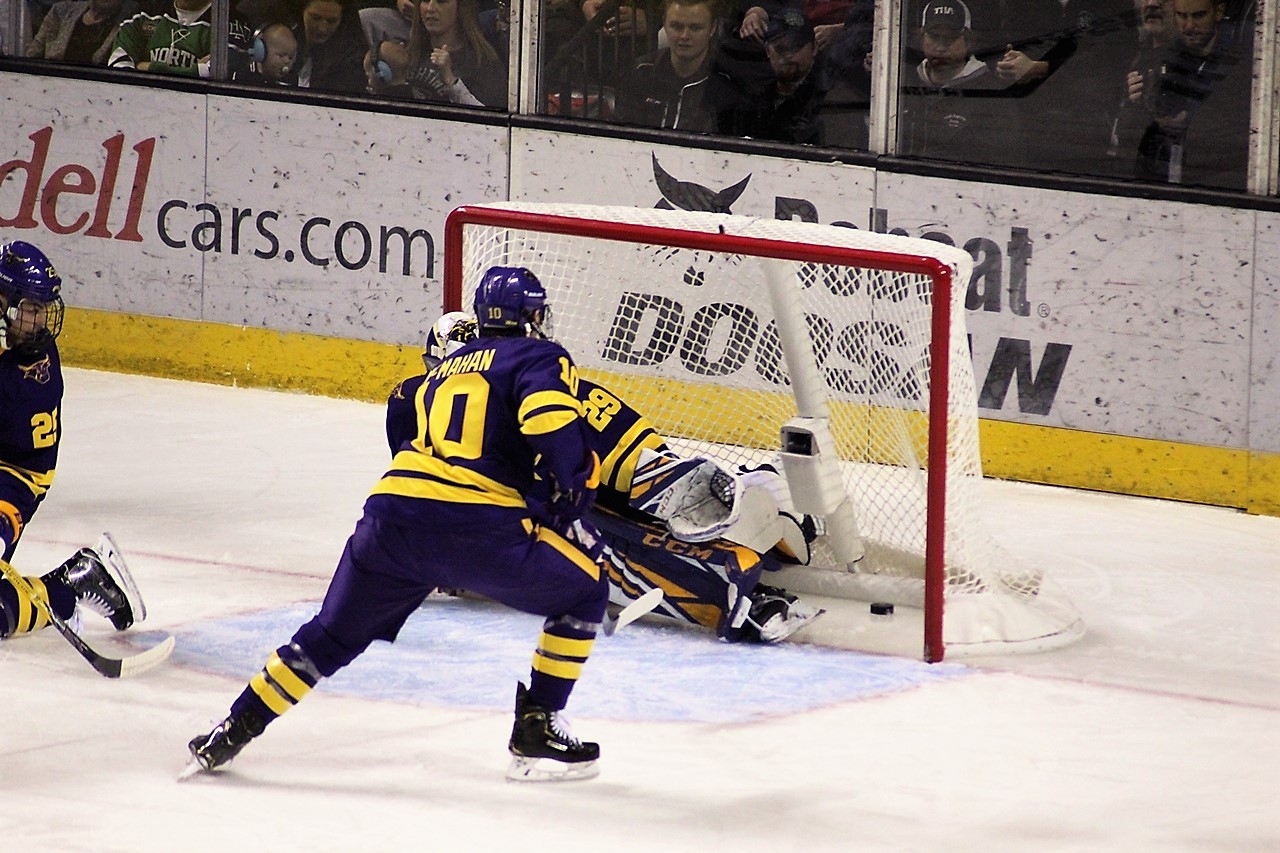 Grand Forks, ND – On Friday night, the University of North Dakota was looking to right the ship against the Minnesota State Mavericks. The two teams hadn’t played since the 2012-13 season. The five-year absence didn’t make the heart fonder. Nor did it take long for the two teams to get reacquainted.

Entering Friday’s game, UND was averaging a goal per game, the Fighting Hawks were struggling for offensive production. On Friday, UND did something it hadn’t done all season, score more than a single goal during a game. Unfortunately, the Hawks gave up more goals than they scored. When the final horn sounded, the Hawks were on the wrong side of a 7-4 score.

During the opening period, the two teams traded a pair of goals and ended the period tied 2-2. Scoring for UND forwards Collin Adams and Zach Yon. On the other end of the ice, the Mavericks received goals from Parker Tuomie and Max Coatta. Those two would add to their offensive numbers.

At the 6:55 mark of the first period, senior forward Rhett Gardner was assessed a five-minute major penalty and a game misconduct for checking from behind. The ensuing power play led to a power-play goal by the Mavericks, tying the game at two. Prior to the game-tying goal, UND had been the better team. After Gardner’s major penalty, it was all downhill for the Hawks.

“We took a five-minute major which took us out of the game,” head coach Brad Berry said. “Which took one of our better players out of the game. That put us on our heels a little bit. It was the start we wanted but not the result we wanted.”

The second period would end up looking like a wild west shootout. At the 01:38 mark of the first period, Coatta would score his second goal of the game to make it 3-2. The Mavericks smelled blood. They would score again 29 seconds later with another goal from Tuomie. That would be all for sophomore goalie Peter Thome.

After 22 minutes of hockey, the Mavericks had scored four goals on 11 shots. The hometown fan grew restless.

Enter freshman goalie Adam Scheel. He didn’t fare much better than Thome he gave two goals on the first five shots. If you decided to stop watching the game, that was your loss. UND would score a couple of goals and trail 6-4 after two periods of play.

At the 10:55 mark of the second period, Coatta would get the hattrick.

In the third period, the two teams skated to a stalemate. UND didn’t give up and kept pushing the pace, however, they were unable to get any more goals past the Mavericks goalie Dryden McKay (34-38, .894).

Late in the game, the Mavericks would add an empty net goal to make it 7-4. It was the third game in a row that the Hawks had outshot the opposition but they’ve yet to win a game.

When it was all said and done, there was plenty of blame to go around. The recurring theme, tighten up on defense.

“Some guys were trying to create offense and there were a couple of pinches where they got around us, sophomore defenseman Matt Kiersted said. “In the D zone, we have to lock out the front of our net.”

“Our D zone, odd-man rushes that kind of stuff killed us,” sophomore forward Jordan Kawaguchi said. “We have to clean that up before we look at offense.”

“I think if we keep shooting the puck it will come,” Kiersted said. “We have to start hitting our spots and crashing the net for rebounds and I think that will pan out.”

My Three Star of the Game