Nick Portz in the DU paint.

In 2021, the Budweiser Events Center hosted the NCAA’s Western regional with no fans in attendance, just a few family members to support the teams in Loveland. A year later, fans are back in attendance and we’ve got playoff hockey games with a proper playoff atmosphere! Let’s preview the matchups.

An old dynasty faces a current one. Michigan Tech played in seven  National Championship games and won three in the space of twenty years seasons between 1956 and 1975. But after their glory years, Houghton fell quiet. The Huskies missed the NCAA Tournament for over 30 years following the 1981 season. That has completely changed in the last eight seasons, in which Tech has reached four NCAA Tournaments. They’re becoming a fixture at the dance again and intend on their first Frozen Four since the Reagan administration.

They’re a pretty balanced unit this season that leans toward the defensive side. Tech is fourth in the country in goal allowed (2.00), third in penalty kill (89.7%), and third in shots allowed per game (23.6). Blake Pietila handles the net, starting ever game between the pipes. His save percentage (.918) is the lowest in the region, and was upset in the CCHA Semi-Finals by Bemidji State (4 goals allowed, 19 saves) but he’s posted respectable efforts all season, particularly in excellent efforts against Wisconsin (38 saves), Notre Dame (28 saves) and at Clarkson (22 save shutout). He gets plenty of help from a blue line that limits the work load in front of him. Colin Swayer (35 GP, 5G/18A/23PTS) was an all-conference performer this season while Brett Thorne (35 GP, 5G/12A/17PTS) and Boston College transfer Michael Karrow (35 GP, 2G/8A/10PTS) provide some more physical presence.

Tech’s offense is no slouch either. The team is tied for 10th in goals per game (3.25) and is led by senior Brian Halonen (36 GP, 21G/23A/44PTS). The Delano, MN, native is the nation’s fifth leading goal scorer and tied for sixth in overall scoring. He does come into the tournament on a three game pointless stretch and will need to be a scoring factor to give Tech a great chance to win. Other notable scorers include fellow seniors Trenton Bliss (35 GP, 12G/28A/40PTS), who’s top-20 in scoring nationally, and Tommy Parrottino (36 GP, 11G/17A/28PTS). The team also boasts the nation’s second best power play (26.8%)

Tech’s task is facing the most successful college hockey program of the last decade plus in the Minnesota-Duluth Bulldogs. Joel Shawhan has his work cut out against Scott Sandelin.

The Bulldogs claimed their third NCHC Tournament crown and did so with shutouts against Denver and Western Michigan in the semi-finals and championship game respectively. Both the Pioneers and Broncos are top seeds in their respective regions, Denver’s actually in Duluth’s region.

It's our time and there's no slowing down. #BulldogCountry pic.twitter.com/b9bvkftynS

Duluth’s offense is only about middle of the pack this season (2.6 GPG), but they provide a physical challenge and unmatched experience. Kobe Roth (40 GP, 14G/12A/26PTS) boasts two National Championship rings and Noah Cates (35 GP/11G/13A/24PTS) returns with the 2019 ring in hand. Leading scorer Blake Biondi (40 GP, 17G/11A/28PTS) and Bruins draft prospect Quinn Olson (40 GP, 6G/19A/25PTS) provide a good depth of scoring and were a part of last season’s Frozen Four run.

UMD is eyeing their fifth consecutive Frozen Four appearance, an unparalleled amount of success in the modern era of college hockey.

These two teams fell a game short of their conference’s championship game, losing to the eventual champion of the NCHC and Hockey East tournaments respectively. While the two traveled similar paths, the Pioneers and RiverHawks play markedly different styles.

Denver boasts a marvelous spread of offensive talents led by the nation’s leading scorer: Philadelphia Flyers 2nd round draft pick Bobby Brink (37GP, 14G/41A/55PTS). The Minnetonka, MN, native is joined by five other NHL draft picks up front and three other 40+ point scorers. Carter Savoie (35GP, 20G/22A/42PTS) and Cole Guttman (37 GP, 18G/25A/43PTS) form one the nation’s most potent lines. Guttman for his part is also fourth in the country in faceoff wins. Brett Stapely (37 GP, 15G/25A/40PTS) is also a 40 point scorer and serves on the team’s second line. 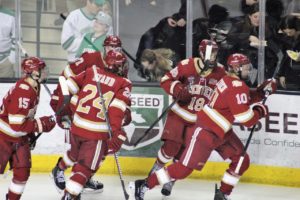 Denver also gets plenty of scoring from their blue line as well. Mike Benning (37 GP, 14G/19A/33PTS) and Sean Behrens (32GP, 3G/25A/28PTS) lead the way while Shai Buium (35GP, 3G/14A/17PTS) contribute to the depth of blue line scoring. The only offensive concern is that Denver got shutout against Duluth in the NCHC Semi-Finals last weekend, but still, this team is wildly potent on the scoring front.

Magnus Chrona takes the net for DU and he’s been a bit up and down. His .905 save percentage is the lowest of any starting goalie in the Loveland regional, but he held his own gains Duluth, stopping 29 of 30 shots.

Denver’s opponent is UMass-Lowell, a team who also had a disappointing end to their conference tournament push, but enjoyed a successful season on the back of their defense rather than their offense. Lowell is fifth this season in goals allowed (2.2) and leans on RPI transfer goalie Owen Savory (28GP, 1.89GAA/.927SVP/5SO) for their defense. He posted a relatively poor performance against UMass in the Hockey East semi-finals (16 saves, 3 goals) but still led the team to their first NCAA Tournament since 2017.

Lowell’s offense doesn’t boast a single 30 point scorer, but seems to be in the right position to score well timed goals. LA Kings draft pick Andre Lee (33GP, 16G/12A/28PTS), and Carl Berglund (32GP, 9A/19A/28PTS) lead the day while Matt Crasa (34 GP, 12G/8A) provides needed youthful scoring. The lone concern is Crasa scoring an own goal in the UMass game at TD Garden, and how he’ll bounce back. Head Coach Norm Bazin showed complete faith in his freshman forward and will need him to be prepared to face David Carle’s unit in what will essentially be a road game in Colorado.