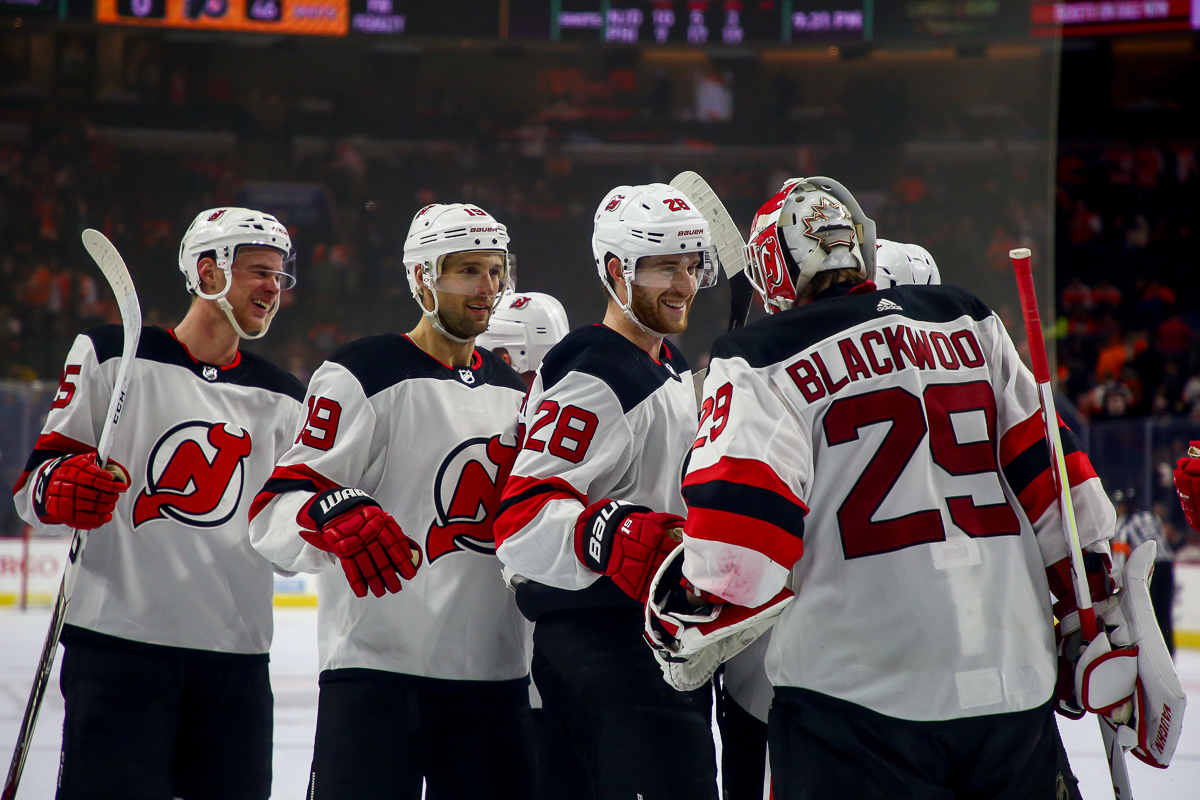 Making their return to the ice for the first time in 10 months, the Devils looked like a team that hadn’t been on the ice for 10 months.

For 12 Devils, Thursday’s meeting with the Bruins was their first lick of competitive action since the NHL paused the 19-20 season before resuming in August with a postseason that did not have the 25th-place club in mind. Boston peppered Mackenzie Blackwood with 37 shots on the night–26 coming in the game’s opening 40:00. Ill-advised penalties didn’t help the matter, allowing the B’s their only tallies on the advantage. New Jersey managed to come back twice to claw back a point before falling in a shootout. The pace did pick up as the evening went on, but the game was a confirmation that scrimmage doesn’t replace the real thing and in many ways, the implications of training camp remain.

“I think you saw in the first period tonight the absence of playing for a long time,” head coach Lindy Ruff said following the 3-2 shootout defeat, his first game behind the New Jersey bench. “I think we thought it was going to be a bit more like a scrimmage and it was a real game. Boston was really hard on the compete.”

To their credit, the Devils pace in the third and in OT offered some signs of encouragement and then there was the play of Blackwood, who stopped 35 shots and saw last season’s second-best power play get five opportunities.

“I felt pretty good,” the third-year netminder said. “I made a couple mistakes you don’t notice just cause they didn’t shoot or get chances, but overall with no preseason games I think that’s a pretty good start and hopefully we can just build on that.”

Jack Hughes opened his sophomore season a pair of assists in the third period including a secondary apple on the 13:46 tally, the first NHL career for rookie, Ty Smith, to propel the contest to three-on-three. He showed strong positioning and had some glorious opportunities in the dying moments of play. Still, the 19-year-old declined to assess his game a particular way–since you know, it’s been 10 months.

Instead, the center stressed the importance of development among one of the league’s youngest groups, himself included. While fans get to know some of the newest faces, both Ruff and Hughes admitted that they too are still just learning about some of the players that impressed enough in camp to earn a spot in the final-23. Yegor Sharangovich is one of those players. The Russian-born forward, who made his NHL debut on the Devils top line, centered by Hughes, didn’t boast much at the time of the 19-20 pause, but shined in 34 games with Minsk Dynamo of the KHL and coupled that showing with a strong training camp.

“He’s good, strong on the puck and he’s got a great shot,” Hughes said of the Devils’ 2018 fifth round draft pick. “We need him to keep developing, keep finding his game and just get more comfortable. It’s his first game–our first game on a line together, we didn’t get any scrimmage time together so we’re still figuring things out–but I think he should be a good player to play with. We got to just get him to keep using his size and his skill.”

Ruff admitted that the concept of playing Hughes and Sharangovich together wasn’t pre-planned but rather a late development out of training camp.

“I think what happened was (he) really impressed me through training camp,” Ruff said. “He had done so many good things and it was an opportunity to put a really good two-way player and a guy that could score–a guy on his left, a guy on his right and for me, that’s a line that can score.”

But as was also noted, the arrival of Sharangovich isn’t the only development to watch as the season runs through its infancy. Will Butcher, who played most of last season prior to being sidelined by injury, was healthy scratched, a result of “training camp,”according to the coach. He’s not likely to be the last as the fallout from the long layoff mixed with other uncertainty keeps the revolving door in-motion. More decisions are on the horizon–Nico Hischier (day-to-day) could return within the next few weeks and newly-signed Jesper Bratt and Sami Vatanen will be eligible to be added to the roster soon as well. All of it makes for an extension of camp competitiveness, which isn’t exactly a bad thing.

“I definitely think it can’t hurt us,” Ruff said. “With more players coming in and obviously players that can make a difference for us, the competition should ramp up.”