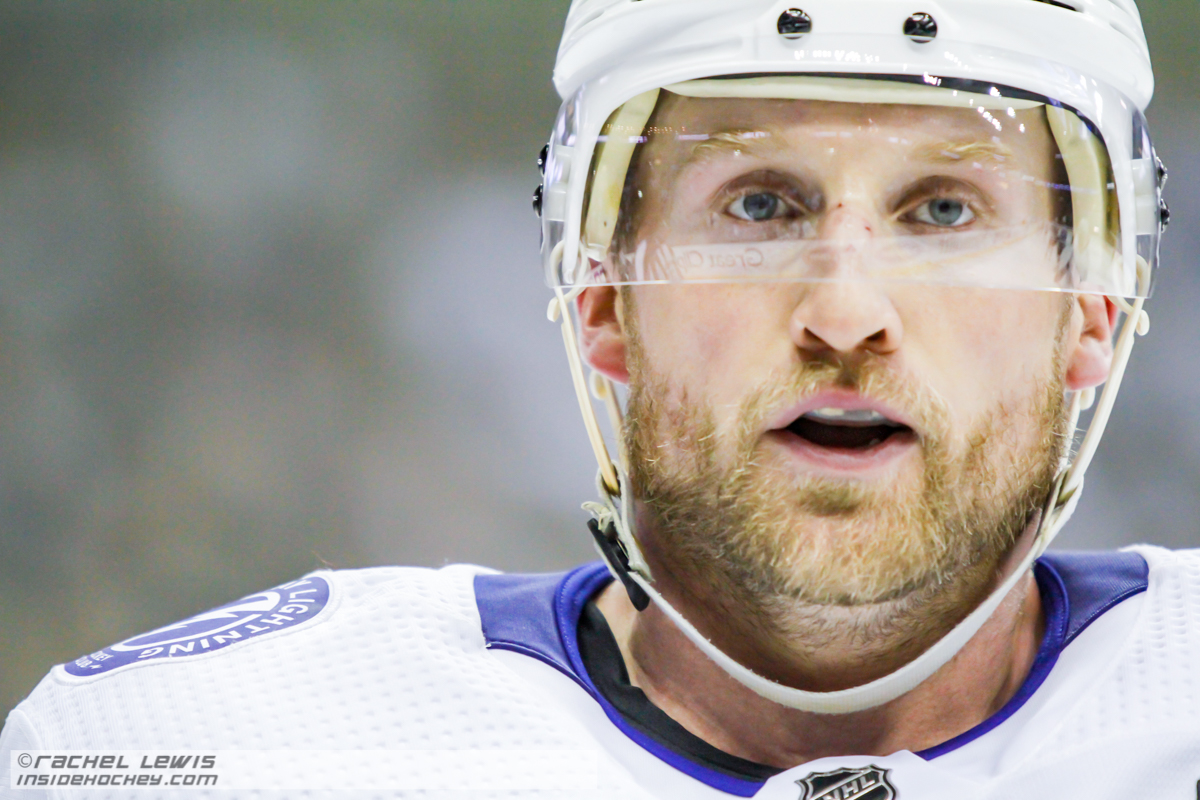 Steven Stamkos (TBL - 91) gets ready for a faceoff.

The Minnesota Wild came into Tampa Bay on a hot streak with points in 11 straight games, but the talk surrounding the Lightning after their 5-4 loss was centered around defense and paying attention to details.

The Lightning fell into a quick hole after defenseman Erik Cernak gave them a 1-0 lead when he blasted a slap shot past Minnesota goalie Alex Stalock in the first period.

The Wild promptly scored 3 times in a 1:41 stretch in the first period as the Lightning could not secure pucks on their own end of the ice. After Minnesota center Joel Ericksson Ek collected a puck in front of Tampa Bay goalie Andrei Vasilevskiy and scored on a short wrist shot, Tampa Bay didn’t regroup quick enough.

Some 1:13 later, Wild forward Jason Zucker separated the puck from Tyler Johnson along the board in the Lightning zone. It was collected by Mats Zuccarello who fed it to Eric Staal who hit Zucker for the goal and the 2-1 Minnesota lead.  It was a lesson in cross-ice passing that caught Tampa Bay on it’s heels.

Carson Soucy would add the third goal at 11:14 to give Minnesota a 3-1 advantage.

“The pride we are taking in our D-zone is unacceptable right now although we have thrown some good games together of late where we have played pretty well,” said Lightning coach John Cooper. “You give up goals like this in this league, you have no chance. If you say you are gonna score four goals tonight, you think you are going to win, let alone get no points.”

It marked the second home game in a row where the Lightning had given up 3 goals in a period after the Carolina Hurricanes hit them with a 3-spot on Saturday night which resulted in a 3-2 loss.

The drama ramped up in the second period when Anthony Cirelli appeared to have tied the game on a breakaway goal at 17:48. The referee waived it off through and called a hooking penalty on Minnesota defenseman Ryan Hartman as the infraction was well before Cirelli’s goal.

After a lengthy review on the play by Cirelli, Cooper thought maybe that he had tied the game with his heads up play.

“We originally thought it was called a goal,” commented Cooper. “There was the risk of having that called back and nullify your power play. Unfortunately, we gave one up 38 seconds later.”

Off the face off, Victor Hedman blasted the tying goal from behind the circles at 18:47 as it appeared that Tampa Bay could go to the locker room tied at 3-3 after two periods.

That scenario wouldn’t happen though as Victor Rask connected on a tap in behind Vasilevskiy which gave the Wild a 4-3 lead at 19:24 in the second. Once again, Tampa Bay failed to collect itself on defense and gave up another easy marker.

Once again, the Lightning would draw even and shift the momentum as Alex Killorn collected an errant puck in the Wild zone and scored to tie the game at 4-4 at the 4-minute mark of the third period.

The tie and the potential to pull out a tough win didn’t last long as Minnesota controlled the puck off the ensuing face-off when Zucker skated toward Vasilevskiy, but skipped the pass back to Zuccarello, who was flying at the net.

Zucker found the Wild center for the score which was eight seconds after Killorn tied the game. Once again it deflated Amalie Arena as Minnesota connected with the quick answer.

“It’s the biggest shift of the game,” noted Cooper. “One was in 38 seconds off a blow D-zone coverage and the other should have never happened. It’s unacceptable – a lack of focus. Going out there after you work so hard to get the tying goal.”

The lack of urgency and focus on defense after putting themselves in position to win costed the Lightning immeasurably. Cooper was aghast at how this dynamic was an issue.

Cooper explained that the idea of staying focused defensively ultimately was on the players.

“There is only so much you can do to get the guys focused,” Cooper explained. “They have to go out there and perform. I am not saying that they are not trying. They have lapses and we got burned tonight.”

Hedman’s second period offering was his 100th career goal which tempered his enthusiasm with the Lightning loss.

“We got to have better starts because that’s twice in a row at home to give up 3 goals in one period and then tie the game twice and give up a goal so quickly,” said Hedman. “We still have to play good defensively. We can’t give up 4 or 5 a night and expect to win.”

Zuccarello finished with a goal and two assists for the Wild while Zucker and Soucy netted a goal and had an assist each.

Cernak had a goal and an assist for Tampa Bay as the Lightning, who have dropped 4 of their last 5, including an overtime loss in Washington on Nov. 29.