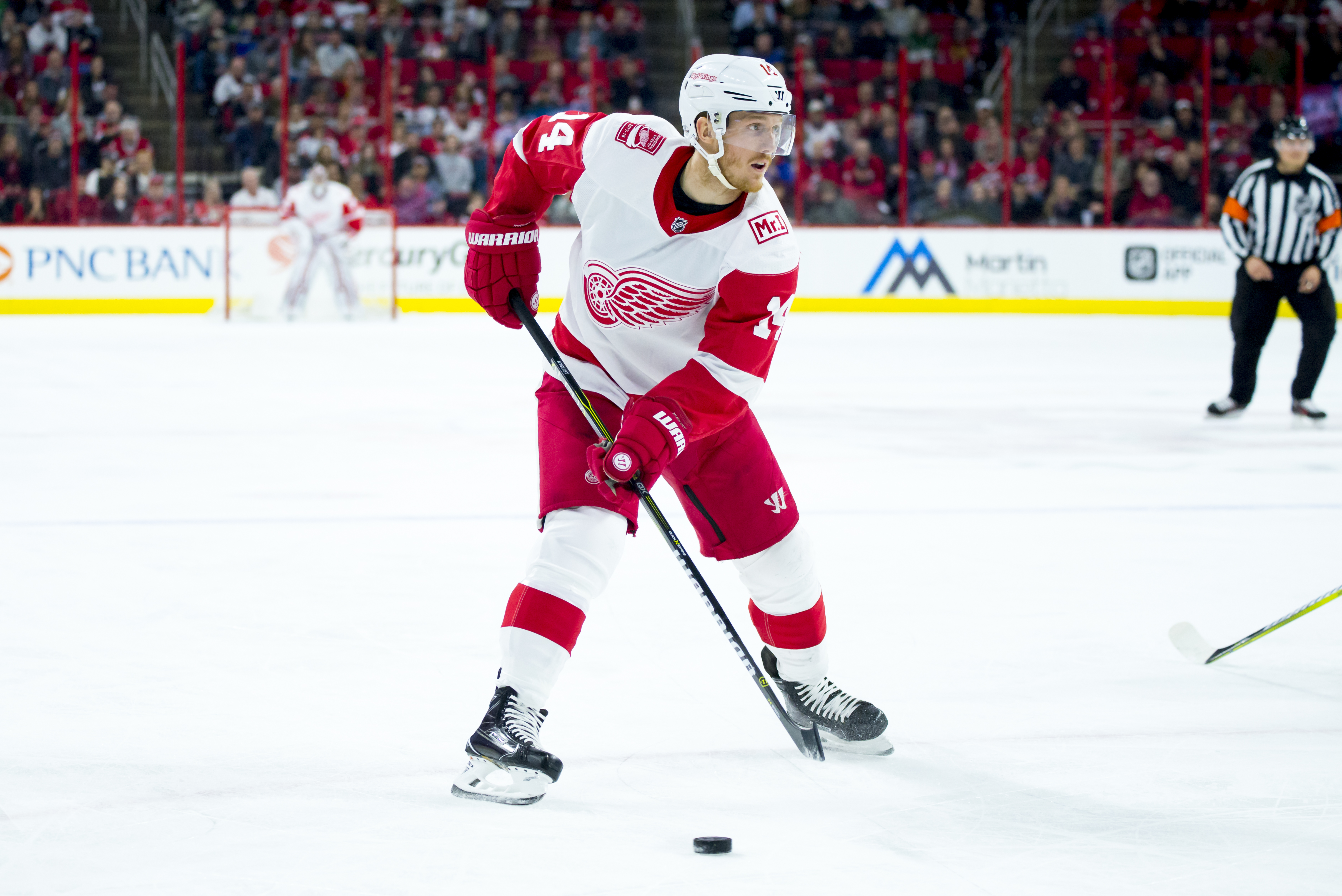 Letting Them Hang Around

The Kings let the Red Wings hang around and hang around on Thursday night, playing as if they had all the points to spare in the playoff race. They don’t.

The shots opened 6-0 for the Kings, but it took much of the first period to get there. They scored along the way, on shot five, a perfectly executed play. Kopitar put the faceoff deep to the right in the Detroit zone over to Alex Iafallo. He tipped the puck back to Paul LaDue, who zinged a shot to the net through a crowd. Kid goalie Jared Coreau never picked it up in the legs, and it went past him.

The Wings finally got a shot with 8:24 left in the period. Anthony Mantha put one to the net, then chased his own rebound, getting another shot as he got close to the net. Quick dove over and stopped the puck underneath a leg.

Detroit had a power play when Kyle Clifford went off for slashing, but they did nothing with it. One shot was tipped, wide. The teams ended period one near even in shots, at 7-6 Detroit. Hanging around.

The second was no blistering pace, either. The shots ended up 11 for the home team, 13 for the visitors. Nobody scored, but the Kings had a power play.

They didn’t even register a shot on it. It started 8-8 and ended that way. The problem—way too much passing. The passed, and passed. And passed some more. Nobody would launch one. The crowd would have grown restless except that it was such a Detroit-partisan group they were actually pretty OK with things as they were. Maybe they hang out at the mall a lot or something, speaking of hanging around.

The Kings had a few good chances during the period. Pearson pushed over his check early and passed to Toffoli in the slot. The puck was snagged on a slapshot. Later on, there was a shot and a save with Dustin Brown perched right in front of the cage.

The only saving grace for the Kings was that when the Red Wings had the puck, they generally didn’t know what to do with it. They just don’t go to the net. At all.

Just one example: Dustin Brown lost it at the Detroit blue line in P2. Gustav Nyquist picked it up. He just couldn’t burst away with it, and he lost it at the line. A general scrum ensued. It was kind of a template for the middle third of the game, and Tyler Bertuzzi was mixed up in most such occurrences.

The slow play continued, but it wasn’t just Detroit. The Kings have to take responsibility for that, also. They can, if they want to, play a faster game than what they were, not by skating, but through passing. They just didn’t advance the puck . And there’s no excuse for launching only five shots in a period, especially one where you had the puck much of the time, but that’s what LA did in the middle frame. Think of it another way: Detroit got six shots on net. And they outshot the home team.

With the game at 1-0 LA, the Kings put themselves in trouble when LaDue took a high-sticking penalty to end period two. They would thus be shorthanded on clean ice to begin the final period.

The Red Wings had to know how much this mattered. Scoring would even the game, and then it would be on. But they didn’t act that way to open. They frittered away the first twenty seconds, losing the opening faceoff. But they caught fire late, and Niklas Kronwall put a puck to the net. Gustav Nyquist got a stick on it, and it hit the post. He was a foot from the goal line when he shot again and tied the game.

But then the Kings got very, very lucky. They had a power play, on which they were doing nothing much in particular. In fact, Doughty and Kopitar ran into each other behind the net, and both fell down. Oh my. But as play continued, they both ended up on their pins again and the puck got to them. Kopitar somehow whacked it so that it floated up, came down on the top of the net, and then hit Coreau on the back and bounced in. The PP expired that same second.

Lucky, lucky, lucky. But if you’re not particularly good, why not be that?

The Kings ended up winning the game 4-1, with the last goal into the empty net. This meant that they tallied three unanswered goals in the third period after Nyquist tied the game with 45 seconds gone in the frame. But that score looks better than the play appeared in person.

The shots were 22-21 for the Kings. That’s about ten under the average for NHL games across the seasons. The power play chances were four apiece. Each team scored once with the extra player. The rhythm of play hardly got started, though the Wings were much better in the third.

Partly, the loss was the goaltending. Now, you can’t blame the keeper for that lucky bouncer that ended up being the game winner. But you can call him on goal three, by Toffoli, which came because Coreau kicked a leg save off a pad directly to the front for the waiting LA player.

Detroit challenged the goal as offside, and in truth, it was close. The player carrying the puck, Doughty, was almost preceded by someone else who did a toe drag to keep onside. The replay showed the toe as perhaps on the ice. The tip of the blade, that is. It was a long review, which led me to think the following: if it takes that long, and if it’s that uncertain, why bother?

The referee came to center and made a show of the declaration. “The play was . . . (pause) onside! Good goal!” And he pointed to center ice. Big sigh of relief, and the failed challenge put the Kings on a power play with less than two minutes to go. They scored on the empty net to make the final 4-1.

But discount that and call that other one offside, and it was 2-1 late, with Detroit pressing. No wonder the coach said he felt they’d played a good game.

Blashill commented, “We’ve fought out tails off here for a long time and haven’t had results. That’s a hard thing. Our guys keep coming and playing. I think that speaks to the leadership that’s in the dressing room.”

Goalie Coreau said, “There were some good things, some back things, and some things to learn from. Ultimately, we didn’t get the win.”

Kopitar of the Kings tied his career high with 51 assists after recording three. He also scored that goal noted earlier, so he was in on every scoring play for LA. He also has a six-game points streak going.