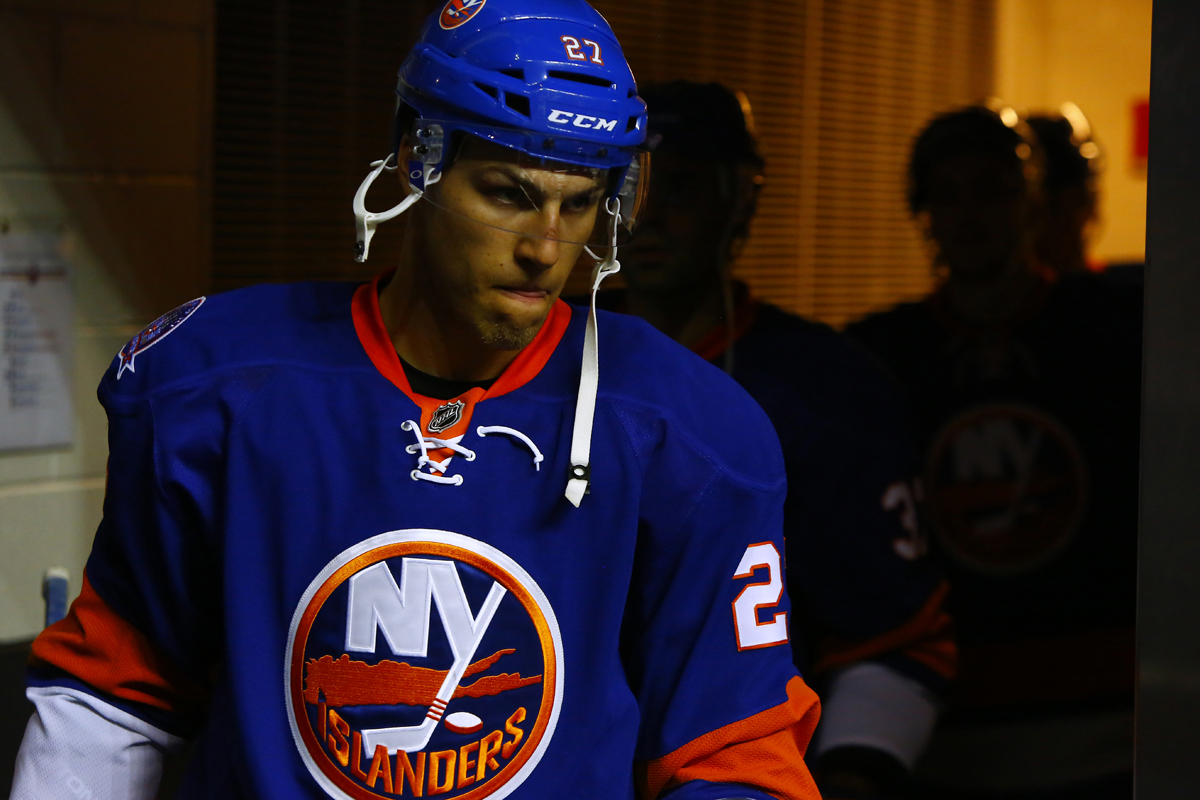 Anders Lee scored twice while Thomas Greiss made 24 saves to lead the New York Islanders to a 3-2 win over the St. Louis Blues Thursday night at Barclays Center. The Isles now have points in six consecutive games (5-0-1) and are over .500 for the first time all season.

“I think we’ve played with poise and we’re getting better at closing out games,” Lee said. “Obviously we’ve had enough of the ones where we let games slide away from us in the third period. To be closing out these games games has been good.”

Lee’s game winner came with 7:18 left in the third period and snapped a 2-2 tie. Casey Cizikas won the draw and got the puck back to Lee at the top of the circle. Lee’s quick release beat Blues goalie Jake Allen and put the Islanders ahead to stay.

“Sometimes you have a feeling about some guys on offensive draws and Casey [Cizikas] did that at a crucial time and it was good to see Anders get the shot away,” Isles coach Jack Capuano said.

Lee has caught fire after a slow start. He now has seven goals in his last eight games after scoring just one in his first 18 contests.

“He’s been strong around the net like he always is,” captain John Tavares said when asked about Lee. “He’s got a great work ethic and always has. After seeing a couple go in, he’s just really confident in his game and what he’s doing.”

The Blues came out strong early and took a 1-0 lead on Robby Fabbri’s goal at 4:36. The goal was set up by a strong play by Vladimir Tarasenko who used his body to shield the puck from Nick Leddy and got the puck to Fabbri just outside the crease for a tap in. The Islanders challenged the goal claiming Tarasenko had interfered with Greiss but the officials ruled that the call on the ice would stand after a video review.

Lee scored his first goal of the night on the power play at 6:51 of the first period. Leddy took a shot from the point that Lee managed to redirect. Tavares was also in front of the goal to screen Allen on the play.

The goal gave the Islanders momentum and they carried the play for the next several minutes. The home team went ahead 2-1 when Tavares scored on a great individual effort at 9:31. He forced a turnover and regained control of the puck before beating Allen with a pinpoint shot.

“I’m just trying to cause pressure and cause a turnover, just trying to be strong on the puck and make a play,” Tavares said. “I ended up being in the slot and had some time so I tried to go blocker side but it still hit something and went in.”

The Isles led 2-1 after a very even first period that saw each team control the tempo for several stretches. St. Louis outshot the Islanders 11-10 in the first 20 minutes.

The second period had less flow and was also evenly played. The Blues scored the only goal of the middle stanza at 3:33 on a hard wrist shot by Kyle Brodziak. Fabbri also assisted on this goal, fighting through a hard check by Travis Hamonic to deliver an accurate pass to Brodziak.

Both teams were more physical in the third period and both goalies made some good saves to keep the game tied before Lee connected on the game winner.

There is a growing sense of confidence in the Isles locker room since the team started winning games.

“There’s a good mood in here now,” Lee added. “We’ve had to climb out of this a little bit together and stuck behind each other and had each others’ backs. That says a lot about the character in this room.”

The Islanders return to action Saturday night when they travel to Columbus to face the Blue Jackets.

Anthony Beauvillier returned to the lineup and Ryan Strome was once again scratched. Johnny Boychuk was also active after missing Tuesday night’s game with flu-like symptoms. That meant Scott Mayfield was a healthy scratch again. Jaroslav Halak was also a scratch with J.F. Berube serving as Greiss’ backup.

The Islanders were not assessed a penalty in the game.