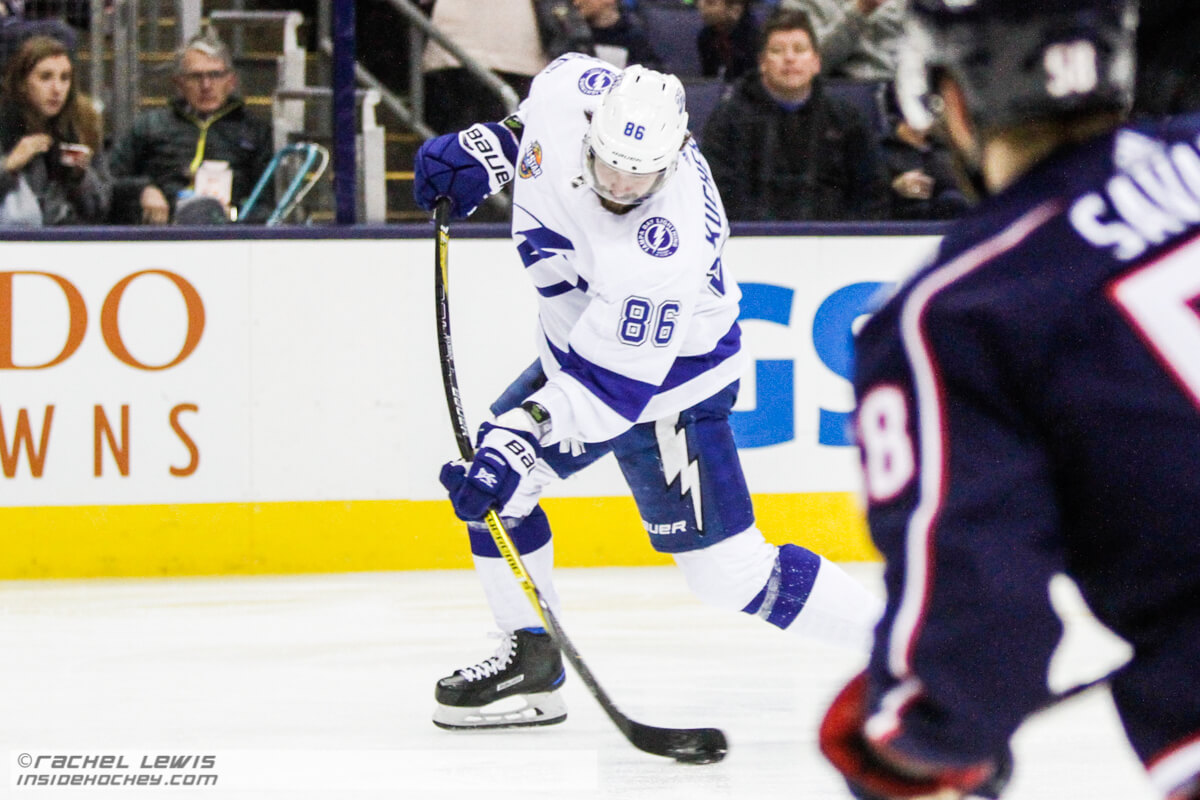 TAMPA – The call to arms in the NHL Playoffs seems to never appear in a similar fashion.

Saturday afternoon in Amalie Arena, it took four Carolina Hurricanes’ goals in an 8:11 stretch to morph into a plethora of Lightning strikes from the Bolts’ frontline players which powered Tampa Bay to a 6-4 win over the strident Hurricanes for a 3-1 lead in the best of seven series.

Nikita Kucherov and Steven Stamkos had two goals each and Brayden Point scored his seven goal of the playoffs while Ondrej Palat had two assists. Tampa Bay moved to 13-5 in Game 4 competition under coach Jon Cooper.

“I give our guys credit,” said Stamkos. “We had a couple of unlucky bounces and I didn’t think we were playing our game,. We just talked about staying into the moment. We got a couple of power plays late and it got us back in the game.”

After Carolina’s Dougie Hamilton and Jaccob Slavin scored a pair of goals some 2:06 apart midway through the second period, the Tampa Bay Lightning used an electrical three-goal performance which was ignited by power play goals from stars Kucherov and Stamkos and it also included a Tyler Johnson score to give the Bolts a 5-4 lead after two periods.

“I haven’t been to a theme park in a long time,” said Lightning coach Jon Cooper. “That was like the baddest ass roller coaster you have ever seen. I think there were 11 goals in the series and then there was eight in the second period. That was chaotic. It was a damn circus out there.”

Kucherov scored his fourth goal of the series when he took a puck off the boards at 14:38 and fired a one-timer past Mrazek to scissor the lead to 4-3.

“Kuch is a special player and it is amazing to see what he is doing with the time he had off all season,” said defenseman Alex Killorn. “It seems he hasn’t lost a step and I love seeing what he is doing in the third period.”

Kucherov had a Steph Curry effect on the game where he was affecting almost everything that was happening on the ice like Curry gets on a roll as a shooter and can’t be contained.

“To be honest, he might have taken over the game,” said Cooper. “There was a point in the second period where we clearly lost control of the second period a little bit. He had been hit – not in a tough manner by one of their guys – and he just channeled his energy the right way. There was a 5-on-5 shift and he was just a beast out there and we had our power play opportunities and he was making plays all over the place.”

The Hurricanes’ lead would disappear for good when Johnson, who had struggled in the playoffs so far, finally lit the lamp at 17:10 when Ross Colton found him with a cross-ice pass that he fired high on Hurricanes goalie Petr Mrazek as it nicked the cross-bar and fell past the goal-line.

Stamkos then scored his second power play goal of the afternoon when Kucherov hit him in the left circle with a crisp circle-to-circle pass. Stamkos fired the puck in the back of the net at 19:38 to give the Lightning a 5-4 lead after two.

“Special teams was big,” said Stamkos. “We didn’t get frustrated after the first couple of power plays didn’t go our way. All you can try to do is capitalize and we did and it got us back in the game.”

The ability to flip the momentum after a powerful Hurricanes surge was the tell-all for the Lightning, who were 3-for-6 on the power play – a huge reason that Tampa Bay has won six of nine games so far in the playoffs.

The win wouldn’t come without consternation though as the Hurricanes started to sniff a 2-2 deadlock in the series midway through the second period.

‘Canes winger Teuvo Teravainen scored on a shot in the middle of the ice at 4:50 off a pass from Jordan Staal and then just 59 seconds later, the Hurricanes’ third line got involved when Teravainen fired a puck which hit the skate of Tampa Bay defenseman Jan Ruuta. Jesper Fast was in the middle and pushed the puck by Andrei Vasilevskiy for a 2-1 Carolina lead.

Even a short lived 2-2 tie off of a power play goal by Steven Stamkos at 9:54 couldn’t slow Carolina’s storm surge.

Dougie Hamilton and Jaccob Slavin completed the Hurricanes assault on Vasilevskiy as Hamilton fired a wrister high on Vasilevskiy’s right side for 3-2 lead. The puck appeared to hit off two different Lightning players on the score at 10:34.

Jaccob Slavin then gave Carolina a  4-2 lead at 12:06 on a wrist-shot off a tight angle on the outside of the left face-off circle. The shot went off of Vasilevskiy’s mask.

The game was as intense as you would expect after the Hurricanes’ win on Thursday as Blake Coleman and Warren Foegele were both immediately put in the penalty box before the puck drop for shoving each other at the bottom of the circle.

The referees started the game at 4-on-4 as neither team gained an advantage.

Controversy ensued at 2:02 when Carolina’s Brady Skejl clipped the top of Kucherov’s helmet and the referees immediately penalized him for an apparent high-stick. One official ruled that there was no intent and the penalty was disallowed.

Tampa Bay went up 1-0 after one period as Point found himself on the right side of the crease. Whenever Palat was able to get  Mrazek to commit, Palat assisted Point who pushed the puck in the net for a 1-0 Lightning lead.

Erik Cernak went cross ice to Palat on the score as it forced Mrazek to shift his position and he couldn’t get back to Point in time for a block.