Take a glance at the NHL point-leaders the morning after a 12th victory and you won’t find a New York Islander among the top-10. Or, 20. Or, 30. In fact, you’d have to go down to the 14-way tie for 12th in the league. Thirty-one players have more points than Mat Barzal’s 19 (8-11) this season. And yet, are you surprised by the Islanders success yet again under the guidance of Barry Trotz?

Devon Toews, who averaged the fourth-most minutes last season, was traded to the Avalanche in the offseason. Jonny Boychuk, a stalwart on the backend, retired due to an eye-injury. And yet, is anyone surprised by the offense suppressed by the Isles? Because if you take a look at the NHL team stats the morning after the 12th victory here’s what you’ll find: 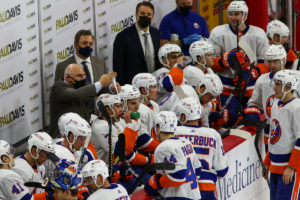 The Islanders sit atop the league in goals-against (T-5th); GA/per game (3rd) and shots-against (5th). They’re tied with Vegas at the time of this being written for the fewest third period goals surrendered. And, while they’ve taken 401 defensive zone face-off’s this season, (a middle of the pack figure), they have the league’s second-best win percentage in their own end. That’s 100+ less draws than the No. 1 DZ win percentage team, the Red Wings–100+ less draws than the 31-point Hurricanes.

But again, what can really surprise you about any of this? Trotz, one of the game’s best bench bosses has a system and deploys it admirably. It might come at the expense of some of its flashier players picking up numbers, but it’s hard to argue against success. Of course if any of that sounds familiar you might recall the third-year President and General Manager, Lou Lamoriello. 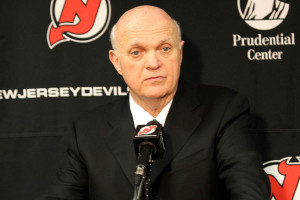 Lou, 78, is presently in his 33rd season as an NHL GM. He is the organizational play-caller and no, that’s not the same kind as what Trotz, the fourth-longest tenured coach under the veteran GM who oversaw 14 coaches in New Jersey including Jacques Lemaire on three occasions and Larry Robinson twice. Also keeping a pulse on his teams, he’s showed the propensity to make coaching changes at the dorp of the hat. Before Montreal’s second dismissal of Claude Julien last week, you might recall Lou axed the head coach in his first season behind the bench….with three games to go in the season….and the Devils owning first in the division.

But the ‘mojo was off’ and action felt needed and that’s just how he operates.

In Toronto, he made initial noise by deciding to come to the Maple Leafs after a storied career including three Stanley Cups. But it felt different. There was a President in Brendan Shanahan. The ‘Boss’ had a boss and he didn’t hire the coach. Though he supported the hiring prior to coming along, Lou entered at the start of Mike Babcock’s lucrative eight-year head coaching deal that ultimately ended last year in the midst of his fifth season, replaced by Sheldon Keefe.

Now back in the New York Groove, you might say and on Long Island, this feels somewhat reminiscent of his time and better yet, his autonomy had in New Jersey. And his team well they look to be on the same trajectory as some of those that used an offensively-suppressing style to dominate the late 90’s into early 2000’s. With everything up in the air this season and the longtime GM with such a feel for his team throughout his career, it’s hard to think he’ll let this season pass by without making some noise.

In New Jersey, he saw his team as a contender on numerous occasions leading him to add: Claude Lemieux (x2), Alex Mogilny, Joe Nieuwendyk and Jamie Langenbrunner, Marek Zidlicky, Alexei Ponikarovsky (x2) and Ilya Kovalchuk. He also added depth players like Grant Marshall, Sergei Nemchinov and Pascal Rheaume. Doug Gilmour and Dave Andreychuk came on to some of the best Devils’ teams in the franchise’s history during the regular season, but couldn’t answer the bell in the postseason.

At last season’s deadline, he traded for and extended Jean-Gabriel Pageau. The team made it all the way to the Eastern Conference Final before bowing out to the eventual champion, Lightning in six games.

What might the ex-NJ and Toronto GM have on his mind when it comes to this year’s deadline? Well that’s simply none of your concern–is something along the lines of a probable response from Lamoriello, who has always kept his intentions ‘in the dark.’

Who knows if the Zach Parise-Andrew Ladd deal was kiboshed thanks to it leaking as far as TSN’s marathon deadline day coverage. And who knows if that sort of deal just might be the kind he’s willing to re-entertain this season. Could Ilya Kovalchuk make another return to the NHL just in time for the final stretch of the regular season and playoffs?

What happens from here is anyone’s guess and don’t expect to find out too much in advance. But the Boss has himself a team this season and it’s hard to think he won’t be maximizing that opportunity.