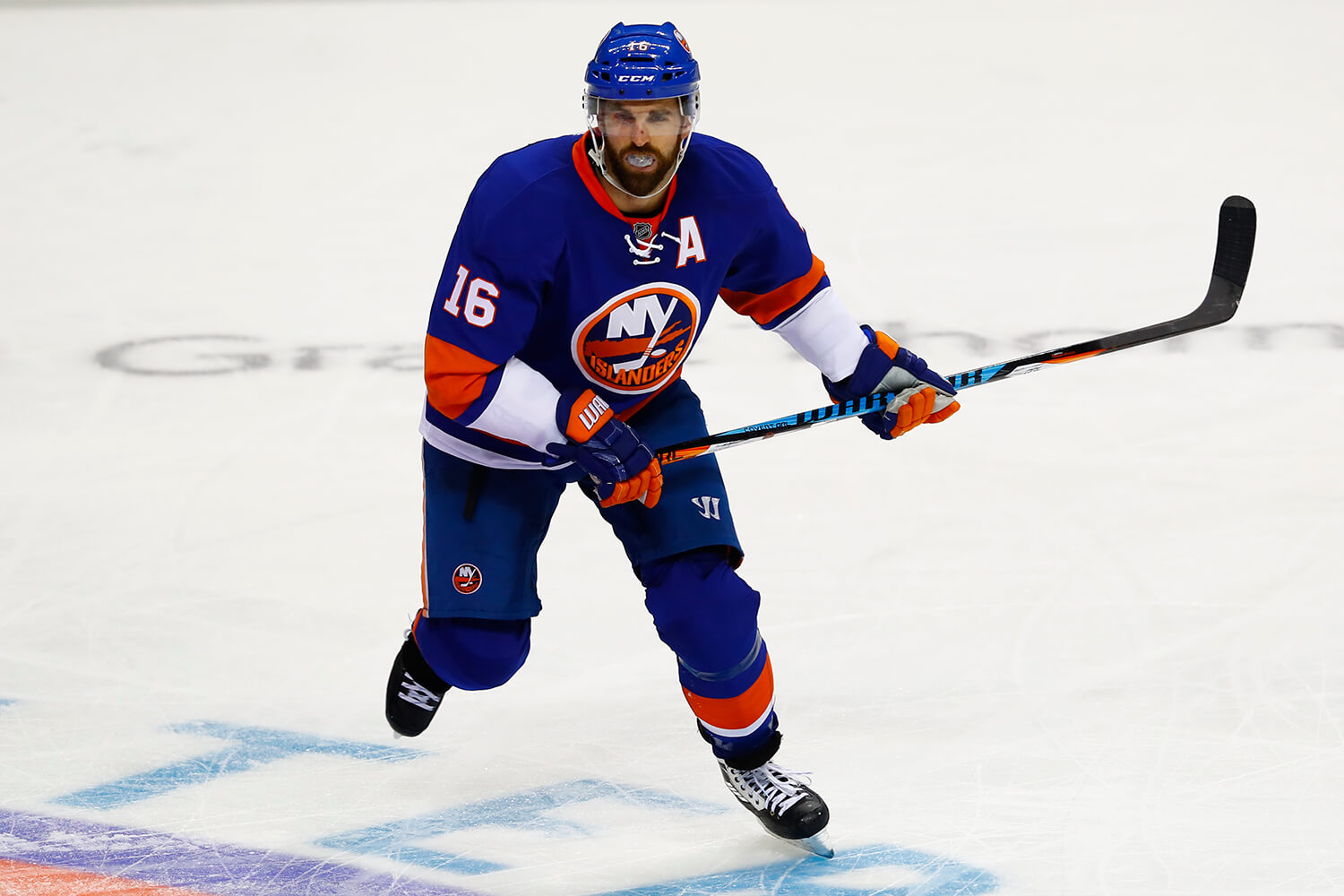 Andrew Ladd scored twice while Jaroslav Halak made 31 saves to lead the New York Islanders to a 4-3 victory over the Washington Capitals at Barclays Center Tuesday night. The win was the third straight for the Isles and got the team back to .500 on the season with a 14-14-6 mark.

“It was a total team effort tonight,” Isles head coach Jack Capuano said after the game. “Jaro [Halak] was really good and he made some big saves for us.”

The Islanders got goals from Ladd and Anders Lee 43 seconds apart early in the third period to break open a 2-2 tie. The Capitals had a pair of power play chances in the game’s final 5:15 but Halak and the Islanders penalty kill came up big and were able to keep Washington from earning the tying tally.

“Back-to-back, late in the third, our penalty killers did a heck of a job to keep the game in check especially against one of the most dangerous power plays in the league,” Ladd said. “Guys were blocking shots and doing the right things.”

The Islanders controlled the play early and cashed in when Nikolay Kulemin drove to the net and Cal Clutterbuck punched home the rebound at 8:02 to give the home team a 1-0 lead.

The tide of the game turned a bit at 13:24 of the first period when Justin Williams scored his eighth goal of the season. The play started on a turnover by Nick Leddy. Halak was able to make a pair of saves but Williams kept the puck in and converted on the third chance to even the score at 1-1.

The second period was more evenly played but the Isles managed to take the lead at 14:03 on Ladd’s first goal of the evening. Thomas Hickey took the puck deep and waited patiently to pass the puck to Ladd who was just outside the far post. Ladd put the puck home to make it 2-1 Islanders after two periods.

A defensive breakdown by the Islanders led to the tying goal just 1:17 into the third period. Alex Ovechkin was uncovered in the slot and easily put home the rebound of a shot by Williams to even the score at 2-2.

Alan Quine set up Ladd’s second goal of the game at 4:41 of the final stanza. The Isles were aided on the play when Tom Wilson was shaken up and slow to get back in the play. That it gave the Isles an extra attacker for the rest of the play. Ladd coverted Quine’s pass and the Isles led 3-2.

Anders Lee added to the Isles lead just 43 seconds later when he blocked a shot attempt by Matt Niskanen at the Islanders blue line and rushed to grab the loose puck. Lee went in on a breakaway and beat Braden Holtby through the five hole to extend the Islanders lead to 4-2.

“I kind of got a lucky bounce,” Lee admitted. “They had it in our zone and I was able to get kind of a break there. I got my head up to see where the goalie was and I had a little bit of a five-hole opening.”

A defensive breakdown by the Isles led to a goal by Andre Burakovsky with 6:55 left in regulation which made it a 4-3 game. The Islanders gave Washington back-to-back power plays with the game on the line in the final 5:15 but were able to hang on to win the game despite the fact that Washington took the final 10 shots on goal of the game.

The victory keeps the Islanders win streak in tact after the holiday break and allows the team some hope as they continue on the long road back to playoff contention in the Metropolitan Division.

“One game at a time,” Lee said with determination. “We’ve got to climb out of this one way or the other and we do that step-by-step. We can’t get too a head of ourselves. We’ve got to take it game-by-game.”

The Islanders next challenge will be the red-hot Minnesota Wild who have won 11 straight games and are 13-1-3 in their last 17 contests. The Isles head to Minnesota to face the Wild Thursday night.

The game was a sellout for the Isles with official attendance at 15,795. It is the third sellout of the season for the Islanders.

The Islanders offense has come alive during the team’s three-game winning streak with the club scoring at least four goals in each of those three contests.

Stephen Gionta and Thomas Greiss were healthy scratches for the Islanders while Casey Cizikas was still unavailable due to injury. J.F. Berube served as the backup goalie.